By Cui Jia and Liu Kun in Wuhan 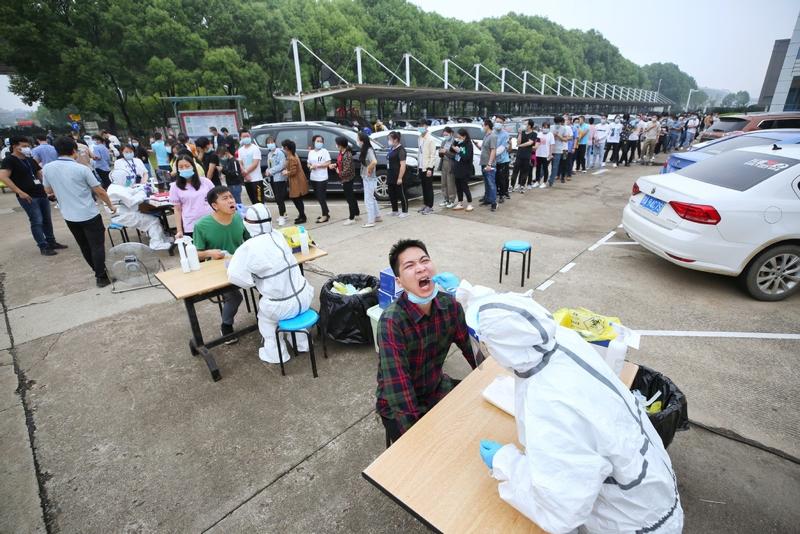 Employees from companies in Caidian district, Wuhan, line up to undergo nucleic acid testing for the coronavirus. (CHEN XUEZI / FOR CHINA DAILY)

Starting the day with breakfast at the numerous small noodle restaurants scattered around Wuhan, Hubei province, has always been a proud local tradition.

However, the novel coronavirus outbreak denied residents this simple pleasure, with such businesses having to close to prevent the outbreak spreading.

As a result, their reopening has been heralded as a significant event, signaling that the city hardest hit by the virus in China is recovering.

But Ren Yang, 33, who owns one of the eateries, needs all the help he can get to keep his business running. "My family has survived the outbreak, but I am not so sure my restaurant can," he said.

Many small businesses in the city won’t survive the pandemic, but those that are left will certainly have great potential

"I normally serve more than 200 people during the morning rush hour every day, but I have only had about 40 customers each morning since I reopened the restaurant on April 12."

Ren, from Xiangyang, Hubei, about 340 kilometers from Wuhan, opened the restaurant, which has just four tables, in June.

By the end of last year, the city was home to 739,000 owners of small and microbusinesses. These enterprises accounted for about 60 percent of the businesses in Wuhan. The pandemic has had a grave impact on them, and more important, the livelihoods of hard-working owners and their families.

Ren spoke while making a bowl of hot dry noodles for a customer, seasoning them with his signature sesame paste and chili oil, which keep diners coming back.

His customers are mainly residents from nearby apartment blocks, along with students and staff members from universities, which remain closed. Although the lockdown imposed in Wuhan was lifted on April 8, many people are still not eating out or even venturing outdoors, he said.

"They are still worried about the pandemic, although it has been contained. Wuhan people have been through hell, so they are extremely sensitive to any new developments regarding the pandemic," Ren said. 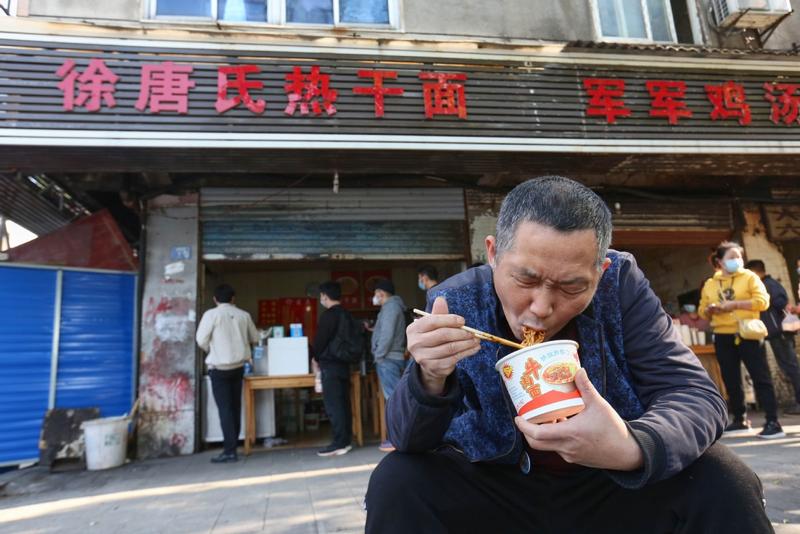 A resident tucks into a bowl of hot dry noodles in Wuhan on April 9 for the first time in 76 days. (GUO ZHIHUA / FOR CHINA DAILY)

After 35 consecutive days with no new infections, six COVID-19 cases were reported in Wuhan on May 9 and May 10, all in the same neighborhood. People were worried, and Ren's business, which was slowly picking up, took a hit again.

"I lose money when I open up, but I lose more if I don't. This is the dilemma I face, as do the other owners of small private businesses in the area," he said.

"I was worried about my health when the outbreak in the city was severe, and now I am worried about my livelihood. The pressure is just too much, because my family depends on the restaurant. It will certainly be a tough year for all people in Wuhan, not just myself."

On April 18, the city authorities issued a directive to help small and microbusinesses get through the tough times, with tenants of State-owned properties receiving a three-month rent exemption and a reduction for a further six months.

Most owners of small and microbusinesses, including Ren, rent from private property owners, who have the option of helping their tenants, or not.

On April 21, a State Council executive meeting decided to ease the rental pressure for such businesses. Property leasers offering rental exemptions or reductions were given a tax cut as encouragement for private property owners to help businesses such as Ren's.

"I have to pay about 10,000 yuan (US$1,408) a month in rent, which is the biggest expense for my business. I spoke to my landlord, and he agreed to an exemption for February and March after hearing that he would receive a property tax cut. I really appreciate this. Something is better than nothing," Ren said.

He has already paid rent up to next month, but if he cannot pay it on time for the second half of this year, he will face losing his business. Ren, who employs four people, including his sister, said: "I will let four families down if I can't carry on. The clock is ticking." 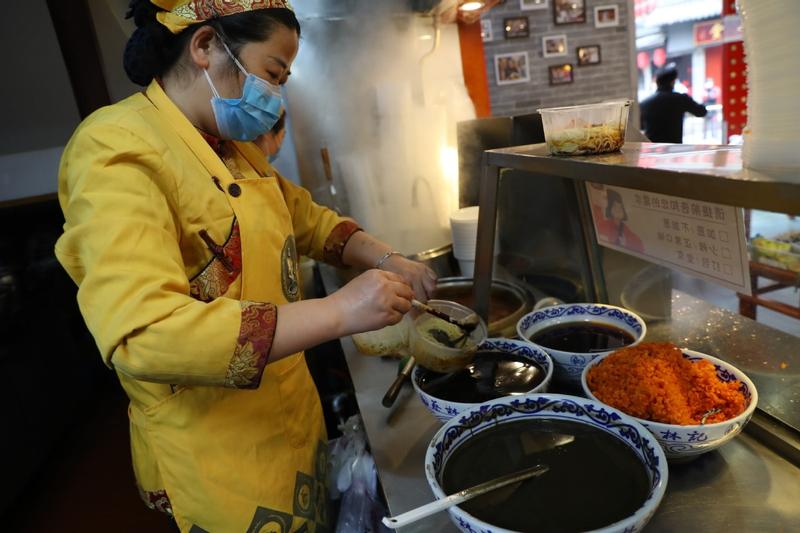 Similar measures to help small and microbusinesses survive have been introduced nationwide, as these enterprises are crucial to local economies, employment and social stability.

On April 27, Tang Renjian, governor of Gansu province, said at a meeting called to discuss the development of such businesses: "Helping them get through the outbreak is a matter of the utmost gravity. The risks of unemployment and bad debts will surely surface if they cannot survive. Furthermore, this may lead to social problems.

"We cannot just make beautiful promises, but must ensure that business owners actually receive the help they desperately need."

The second quarter is crucial for such businesses to recover as the outbreak in China stabilizes, Tang said, adding, "The government must help these businesses as soon as possible, before it's too late."

Ren, the noodle restaurant owner, said he had heard on the news of the assistance being offered to business owners such as himself.

He hopes that someone can sit down with him to talk him through the help he is eligible for and explain how much money he can save as a result.

"I've been asking different departments about tax cuts and discounts on water and electricity bills, but it's very time-consuming," he said.

Ren has drawn up a plan in case his business fails. "I will return to Xiangyang and become a farmer again, but I really enjoy having a laugh with my regular customers while making noodles. I would certainly miss that."

On the other side of Wuhan, Wang Qiong's company office was fully disinfected on April 22, as businesses in the city were resuming normal operations.

When Wang, the founder of DyData, a company providing services for the collection and visualization of data, saw a half-eaten packet of biscuits lying on a table and had to throw away dead plants, she became a little emotional.

"It feels as if the pandemic has lasted for a century. The dusty office is almost like an archaeological site－it was a different world before the outbreak," she said. 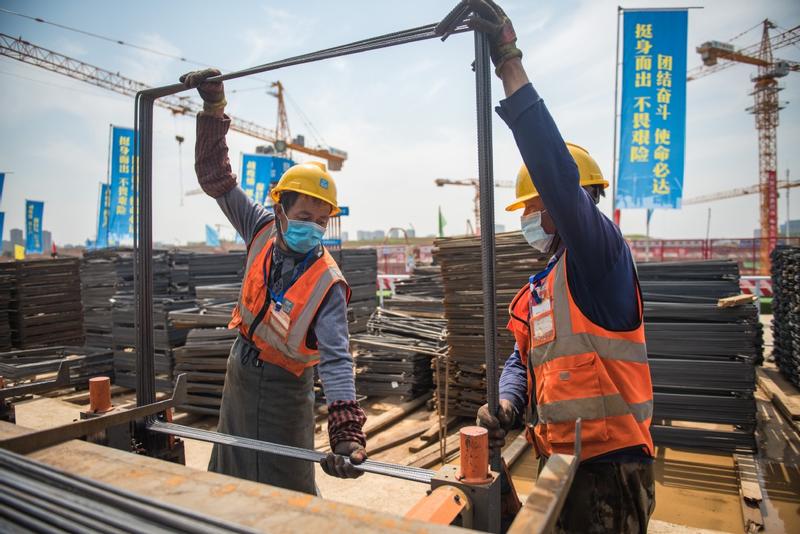 On Jan 20, DyData, which now employs about 30 people, held a banquet ahead of Spring Festival. Those attending wore face masks, as the number of people infected with COVID-19 in the city had started to rise.

Wang said, "Afterward, we assessed the situation and immediately asked employees not to come to work, starting from the next day, but I never thought it would take three months before I could sit in the office again."

On Jan 23, Wuhan was put under lockdown to prevent the virus spreading to other areas of the country. "I asked our employees to report their health status every day. It's my responsibility to help them if they become infected," Wang said.

She and her employees knew that adjustments and cutbacks had to be made to keep DyData afloat－the case with most small businesses significantly affected by the pandemic.

To ensure employees were paid in full and on time, the company's management team, including Wang, decided to take a 50 percent pay cut.

"I know how important a stable income is for my employees and their families during these tough times, so I don't want to make any redundancies. It will be quite an achievement if I can help the employees and the company get through the pandemic," she said.

Staff members can work from home, and demand for the company's services has been high, she said, adding, "As a high-tech company, we are actually more risk-resistant."

Travel restrictions resulting from the lockdown meant that investors planning to visit the company on "inspection missions" had to postpone their trips.

In addition, people returning from visits to Wuhan still need to be quarantined for 14 days in some cities, including Beijing, which has deterred many from traveling to the Hubei provincial capital. 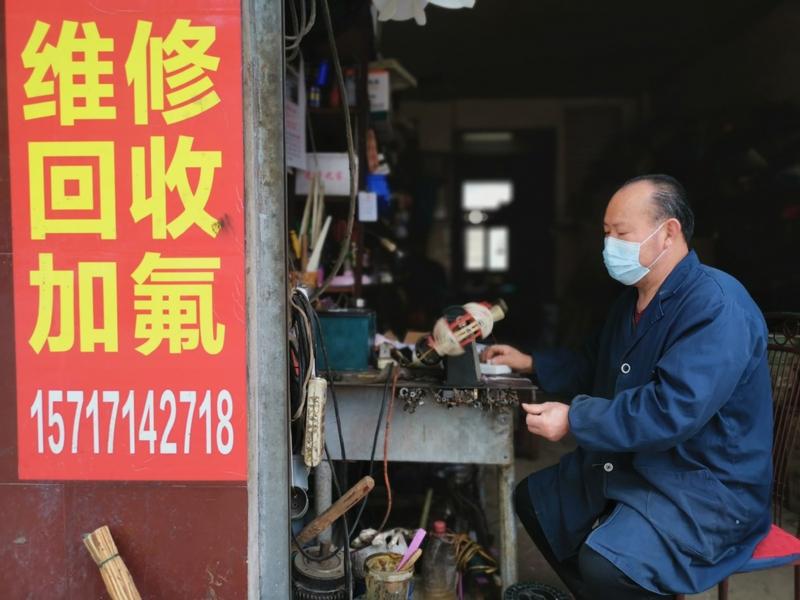 The owner of a small business resumes work in the city. (SUN XINMING / CHINA NEWS SERVICE)

Without investment, Wang has to be resourceful in finding money elsewhere to support the company. She has been carefully studying measures introduced by the Wuhan government to support small and microbusinesses.

Although property owners are being urged to give such businesses rent exemptions for three months, Wang has not heard any such news from management of the office building she rents from.

Small-scale taxpayers in Hubei have been exempted from paying 3 percent value-added tax up to Dec 31. The VAT rate for such taxpayers elsewhere in the country has been reduced to 1 percent.

A further measure has been introduced to help businesses in Hubei cut operational costs.

Companies such as DyData have been exempted from paying employee pension, unemployment and employment injury insurance contributions for five months from February, while employees retain their benefits.

Wang said: "For business owners in Wuhan, getting through the aftermath of the outbreak is just as difficult as surviving the pandemic. Every penny counts."

As an innovative company, DyData receives an annual grant of 600,000 yuan from the Wuhan government, which is planning to attract more startups to the city. Unlike previous years, the company had received 400,000 yuan by last month－a pleasant surprise for Wang.

"Normally, the government transfers the grant to our bank account at the end of the year. Because of the pandemic, it decided to give us the money much earlier to help us get through the hard times," she said.

"I am told that the rest of the money will be transferred as soon as possible. The grant alone can cover the company's operating costs for two months, meaning we can keep going while seeking new opportunities." 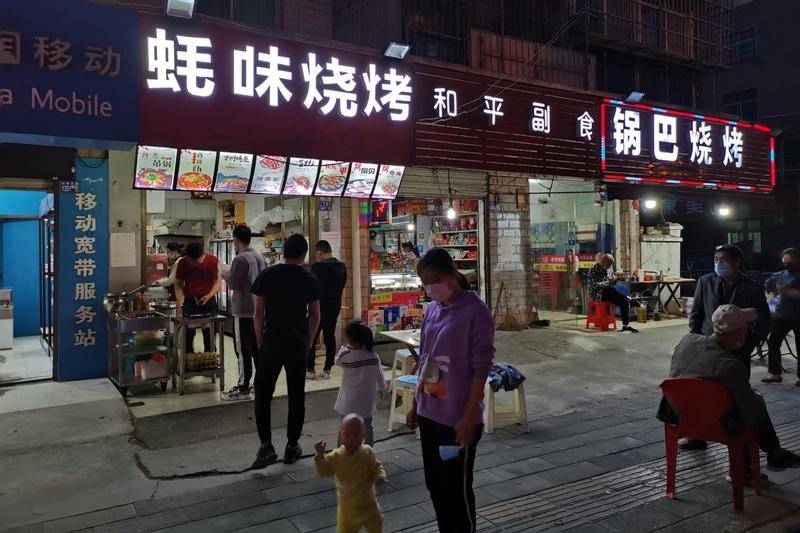 Meanwhile, Lyu Jiang, 37, who sells laminate flooring in Wuhan, is worrying more about the future of his business than becoming infected with the virus.

"Help is available if I get the virus, but I will have to fight for my livelihood alone," Lyu said. He has several showrooms around the city－all of which had to be closed due to the lockdown.

Lyu, who believes that business will boom after the outbreak, has kept in touch with loyal customers through social media.

"People always need to decorate houses, whether a property is new or old. When they are finally able to do so, demand for laminate flooring will surge," he said.

He has been busy with arrangements for his employees to undergo health checks and be tested for COVID-19, an essential requirement before they can return to work and visit people's homes to fit flooring.

"Many small businesses in the city won't survive the pandemic, but those that are left will certainly have great potential," he said.