Vehicles travel at the Manzhouli port in the China-Russia border city of Manzhouli in north China's Inner Mongolia Autonomous Region, April 10, 2020. Ten imported COVID-19 cases were reported in the region on May 24, 2020, the National Health Commission said on May 25. (ZOU JIANPU / XINHUA)

Eleven imported cases were reported, including 10 in the Inner Mongolia autonomous region and one in Sichuan province, the National Health Commission said in its daily report.

Eleven imported cases were reported on the mainland on Sunday, including 10 in the Inner Mongolia autonomous region and one in Sichuan province, the National Health Commission said in its daily report

No new suspected cases and no deaths related to the disease were reported, according to the commission.

On Sunday, seven patients were discharged from hospitals after recovery, while the number of severe cases decreased by one to seven.

Altogether, 78,268 patients had recovered and discharged from hospitals by the end of Sunday, the commission said, adding that there were 83 patients still being treated.

By Sunday, the mainland had reported a total of 1,724 imported cases. Out of those cases, 1,678 had been discharged from hospitals after recovery, and 46 remained hospitalized with one in severe condition. No deaths from imported cases have been reported.

Six people were suspected of being infected with the virus, the commission said, noting that five of the cases were imported from overseas.

The commission said 396 asymptomatic cases, including 28 from overseas, were still under medical observation.

As of Sunday, the province had reported a total of 136 confirmed cases transmitted locally, including two deaths and 109 recoveries.

There were still 25 patients receiving treatment in hospital, with three in severe condition, all in the city of Jilin. 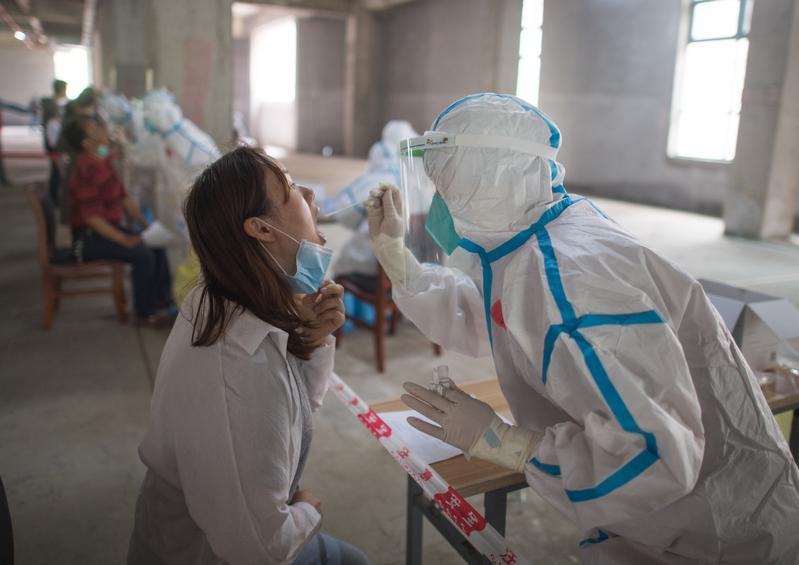 A medical worker takes a swab sample of a resident in Wuhan, Hubei province, on May 15, 2020. (PHOTO / XINHUA)

By Sunday, Hubei has six existing confirmed COVID-19 cases, including one in severe condition and one in critical condition. There were a total of 326 asymptomatic cases under medical observation by Sunday, according to the commission.

The provincial capital Wuhan started a campaign on May 14 to expand nucleic acid testing in order to better know the number of asymptomatic cases or people who show no clear symptoms despite carrying the virus.

According to the latest figures released by the Wuhan municipal health commission, the city conducted more than 6 million nucleic acid tests between May 14 and 23. On Saturday alone, the city performed nearly 1.15 million tests.

A total of 1,030 patients in Hong Kong, 45 in Macao, and 414 in Taiwan had been discharged from hospitals after recovery.