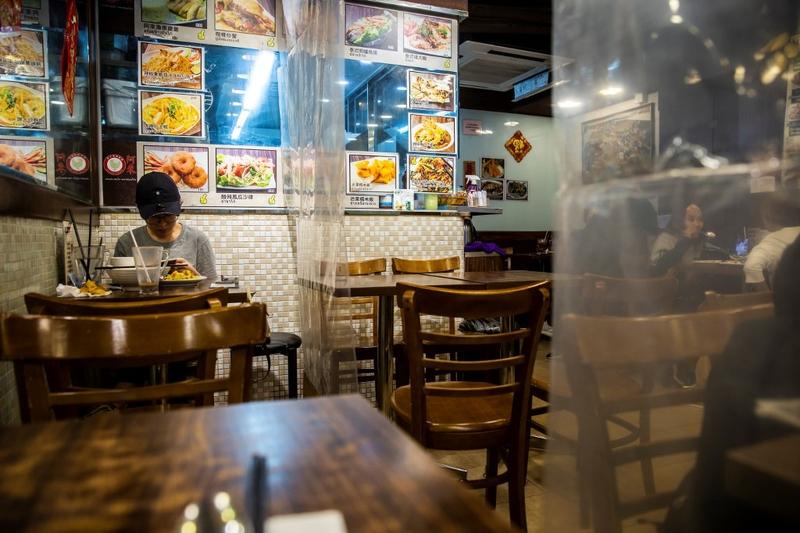 A customer (left) sits in a restaurant where sheets of plastic hang down from above to make sure people adhere to social distancing in Hong Kong on March 29, 2020. (ISAAC LAWRENCE / AFP)

HONG KONG - The Hong Kong government announced on Tuesday to extend a ban on public gatherings of more than eight people till June 4 and the closures of  party rooms, nightclubs and karaoke lounges till May 28.

The ban on gatherings of religious activities in venues such as churches and temples will be lifted from Thursday, health officials said at a press conference.

The announcement came as the financial hub recorded no new COVID-19 cases on Tuesday, with the total number of confirmed cases remained at 1,055, according to the city's Center for Health Protection.

The number of people attending religious activities will be limited to no more than half of the venue’s capacity, Secretary for Food and Health Sophia Chan Siu-chee said during the press conference.

The closures of party rooms, nightclubs and karaoke lounges will be extended to May 28, health officials said

Eating and drinking are banned in religious events, Chan said. The exemption was made on the basis of success with containment and upon considering the requests of a number of religious groups which have been supporting the government in fighting the virus, Chan explained.

The extended restrictions on entertainment venues are necessary to give the government time to further monitor and evaluate community transmission of COVID-19, Chan said.

In view of recent family infection cases in Tsuen Wan and the plan to open schools next Wednesday, the government needs more time to evaluate the risk of local transmission before lifting more containment measures, she said.

The government aims to raise its daily testing capacity from 4,500 to 7,000 at designated laboratories, Secretary for Food and Health Sophia Chan said

Chan said it’s unrealistic to expect a virus-free environment in the short term given the unpredictable global situation, and called on the public to remain patient and cooperate with the government.

The health chief also announced plans for enhanced and expanded testing in the community. The government aims to raise its capacity from current 4,500 to 7,000 tests per day at designated labs, Chan said. Specimen collection containers will be distributed to elderly homes in the city. The initial target is to test 3,000 people within this month, Chan said.

Moreover, Chinese medicine clinics across the city and the district health center in Kwai Tsing will also be supplied with specimen collection containers to help identify COVID-19 patients, especially asymptomatic ones, Chan said.

On the Tsuen Wan family infection, Chan said the government had distributed more than 3,000 specimen collection containers in neighboring communities, and had received more than 2,000 samples that tested negative.

She called on residents to seek medical help as soon as they developed symptoms, even minor ones.

To prevent local infections, the government will further expand the scope of virus testing, as well as strengthening the capabilities in conducting tests, Lam said.

She said the government aims to increase the daily testing capacity to 7,000 from the current 4,500, by purchasing more testing equipment, extending laboratory service hours, and working with local medical schools and private laboratories.

Priority of mass testing will be given to groups considered to be of higher risk of infection, including airport staff, healthcare workers in the elderly homes and persons with disabilities, said Lam.