China, US should lead fight against virus 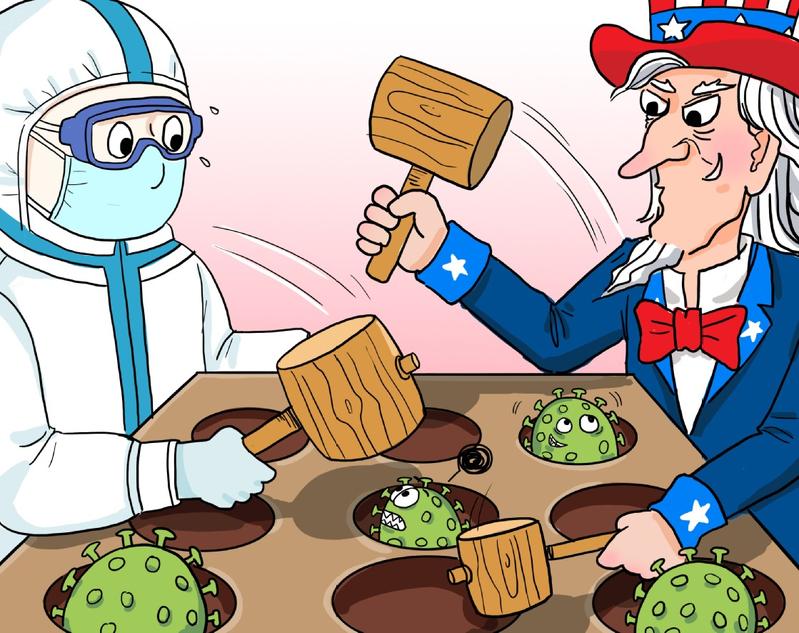 The novel coronavirus pandemic is the severest crisis the world has faced this century, worse than the 2008 global financial crisis. That the global public health emergency can give rise to a host of crises, including economic, social and political crises, given its huge impact on the global supply, industrial and value chains should give an idea about its dire long-term effects.

This butterfly effect will greatly influence the international landscape, the world order and global governance. Confronted with this unprecedented public health crisis, unity and cooperation is the only way to victory.

President Xi Jinping has said that all countries should unite to foster greater synergy to win the battle against the virus. China has been fulfilling its responsibilities as a major country by helping other countries and regions in their fight against the virus and striving to maintain global political and economic stability.

...China and the US should shelve their differences and seize this historic opportunity to forge global cooperation in order to defeat the virus. To this end, they need to resume, as well as improve, policy coordination and exchanges, in order to protect the common good of humankind and build a healthy community with a shared future

Therefore, as the world's two largest economies and most important major countries, the US and China could and should join hands to lead the global fight against the virus, so as to safeguard global public health and revive the global economy.

Besides, by deepening global cooperation in the battle against the virus, China and the US can reboot their relations, which have been seriously undermined since Washington launched the trade war against Beijing in 2018. Four high-level dialogue mechanisms－in diplomacy and security; economy; law enforcement; and people-to-people exchanges－and more than 90 dialogue and cooperation mechanisms at subsidiary levels have largely come to a standstill.

The fact that the US has tried to smear China through a series of irresponsible moves such as referring to the novel coronavirus as the "Chinese virus", clamping down on Chinese media outlets in the US, and passing the so-called Taipei Act has further put bilateral ties to a severe test.

But a number of people with insight in the US have called on the White House to enhance cooperation with China to contain the pandemic. For example, more than 90 US foreign policy experts including former government officials have appealed to the administration to work more closely with China.

Indeed, broadening the common ground and deepening mutual trust is the long-term agenda of China-US relations. True, there are strategic contradictions the two sides may not be able to resolve in the short term. But despite that, China and the US have enjoyed good strategic cooperation. And promoting cooperation in global public health governance, climate change, nuclear non-proliferation and counterterrorism could be the new convergence points for the two sides. In fact, China and the US have a solid basis to cooperate to improve global public health governance, as they have previously worked together contain epidemics.

First, China and the US collaborated well in the early stage of AIDS/HIV monitoring and prevention work. The US National Institutes of Health even provided a five-year special fund of US$14.8 million for the Chinese Center for Disease Control and Prevention for AIDS research and prevention. It also helped China's health department build clinical training centers in remote areas.

Second, the US supported China's battle against the severe acute respiratory syndrome epidemic in 2003, with experts from both sides closely cooperating on research in infectious diseases at the height of the outbreak. The US Department of Health and Human Services and China's Ministry of Health have also agreed to strengthen collaboration in public health infrastructure construction and positioned a US health and human services commissioner at the US embassy in China.

Third, China and the US coordinated well to send experts and health workers to West Africa to jointly fight the Ebola outbreak in 2014. And together, they helped the African Union establish a disease control and prevention center.

Fourth, the two sides have increased exchanges and cooperation in health under the China-US Strategic Economic Dialogue framework. They strengthened exchanges in the field of healthcare during the bird flu outbreak, and issued a joint statement on global public health in 2009. And at the 2015 China-US Strategic Economic Dialogue, they incorporated health into the China-US high-level people-to-people exchange dialogue.

Fifth, the two sides have also worked together to monitor the trajectories of different types of flu. For example, the Chinese National Influenza Center and the US Centers for Disease Control and Prevention inked a deal to boost China's influenza monitoring capability after the SARS outbreak.

But, unfortunately, the US administration has gradually withdrawn from such cooperation with China, rendering a regular communication channel invalid.

At a time when bilateral ties have dipped to a new low and global cooperation faces obstacles, China and the US should shelve their differences and seize this historic opportunity to forge global cooperation in order to defeat the virus.

To this end, they need to resume, as well as improve, policy coordination and exchanges, in order to protect the common good of humankind and build a healthy community with a shared future.

The author is a professor at the Institute of International Strategies, Party School of the CPC Central Committee.