China reaffirms support for WHO after Trump snub 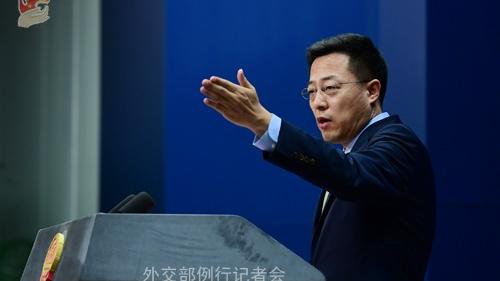 In this undated photograph, Foreign Ministry spokesperson Zhao Lijian takes a question at a press briefing in Beijing. (PHOTO / MINISTRY OF FOREIGN AFFAIRS VIA XINHUA)

BEIJING - China will as always support the work of the World Health Organization (WHO) and its role in leading global efforts to fight the novel coronavirus disease (COVID-19), Foreign Ministry spokesman Zhao Lijian said Wednesday.

Zhao made the remarks at a press briefing after US President Donald Trump reportedly said his country might put its funding to the WHO on hold, and that "the WHO really blew it" in its response to COVID-19.

The spokesman said since the outbreak of COVID-19, the WHO, led by Director-General Tedros Adhanom Ghebreyesus, had been actively fulfilling its duty and upholding an objective, scientific and fair position to assist countries in coping with the coronavirus outbreak and promoting international cooperation.

Zhao said the WHO's important role had been recognized and commended by the international community.

The statement of the recent Extraordinary G20 Leaders' Summit on COVID-19 also stressed that members would fully support and commit to further strengthening the WHO's mandate in coordinating the international fight against the pandemic, he added.

ALSO READ: WHO: Africa will not be testing ground for any vaccines

As COVID-19 spreads rapidly across the world, the US announcement to consider putting a hold on its funding to the WHO might severely jeopardize the organization's operation and harm international cooperation in fighting the pandemic, Zhao said.