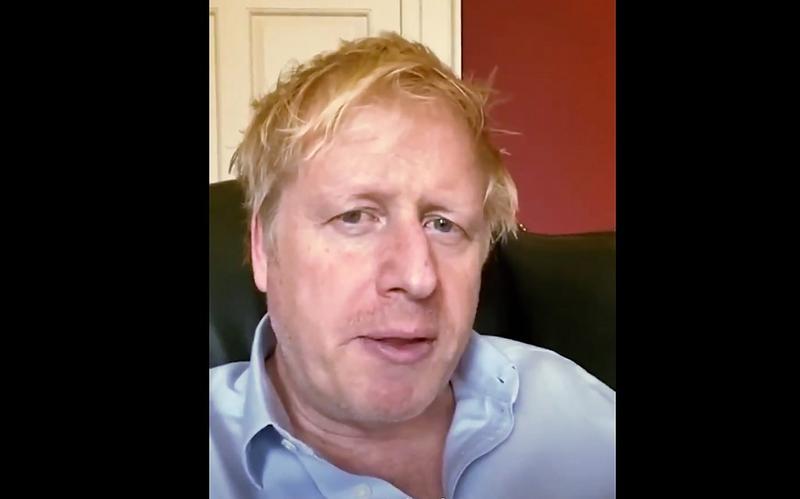 This still image from footage released by 10 Downing Street, the office of the British prime minister, on April 3, 2020 shows Britain's Prime Minister Boris Johnson in 10 Downing Street central London giving an update on his condition after he announced that he had tested positive for the new coronavirus on March 27, 2020. (PHOTO / 10 DOWNING STREET / AFP)

LONDON - British Prime Minister Boris Johnson was stable in intensive care on Tuesday after receiving oxygen support to help him battle COVID-19, while his foreign minister led the government’s response to the accelerating outbreak.

The prime minister has been stable overnight and remains in good spirits. He has not required mechanical ventilation, or non-invasive respiratory support.

The upheaval of Johnson’s personal battle with the virus has shaken the government just as the United Kingdom enters what scientists say will be the most deadly phase of the pandemic, which has killed 5,373 people in Britain and 70,000 worldwide.

Johnson, 55, was admitted to St Thomas’ Hospital across the River Thames from the House of Commons late on Sunday after suffering persistent coronavirus symptoms, including a high temperature and a cough, for more than 10 days.

ALSO READ: UK's plan B if 'Team Johnson' is incapacitated? Answer is unclear

But his condition rapidly deteriorated over the next 24 hours, and he was moved on Monday to an intensive care unit, where the most serious cases are treated, in case he needed to be put on a ventilator. He was still conscious, his office said.

“He is receiving standard oxygen treatment and breathing without any other assistance,” Johnson’s spokesman, who traditionally speaks without his name being published, told reporters.

“The prime minister has been stable overnight and remains in good spirits,” the spokesman said. “He has not required mechanical ventilation, or non-invasive respiratory support.”

But the absence of Johnson, the first leader of a major power to be hospitalised after testing positive for the novel coronavirus, has raised questions about who is truly in charge of the world’s fifth largest economy at such a crucial time.

While Britain has no formal succession plan should a prime minister become incapacitated, Johnson asked Foreign Secretary Dominic Raab, 46, to deputise for him “where necessary”, Downing Street said.

Raab on Tuesday chaired the government’s COVID-19 emergency response meeting, though ministers refused to say who had ultimate control over the United Kingdom’s nuclear weapons - a role held by the prime minister.

“There are well-developed protocols which are in place,” said Gove, who himself went into self-isolation on Tuesday after a family member displayed coronavirus symptoms.

Before being rushed to intensive care, Johnson had said he was in good spirits and Raab had told a news conference that the prime minister was still running the government, although Raab also said he had not spoken to him directly since Saturday.

British leaders do not traditionally publicise the results of their medical examinations as some US presidents including Donald Trump have.

Raab, the son of a Czech-born Jewish refugee who fled the Nazis in 1938, takes the helm at a pivotal time. Government scientists see the death toll rising until at least April 12 and Britain must ultimately decide when to lift the lockdown.

“The government’s business will continue,” said Raab, a staunch Brexit supporter who has served as foreign minister for less than a year.

Johnson’s move to intensive care added to the sense of upheaval that the coronavirus has wrought after its spread caused global panic, sowed chaos through financial markets and prompted the virtual shutdown of the world economy.

The United Kingdom is in a state of virtual lockdown, a situation due to be reviewed early next week, and some ministers have suggested it might need to be extended because some people were flouting the strict rules.

The pound dipped in Asian trading on news of Johnson’s intensive care treatment but then rallied in London trading. Against the dollar, sterling traded to a high of US$1.2349, up 0.9 percent on the session.

Even before coronavirus, Johnson had had a tumultuous year.

He won the top job in July 2019, renegotiated a Brexit deal with the European Union, fought a snap election in December which he won resoundingly and then led the United Kingdom out of the European Union on Jan 31 - promising to seal a Brexit trade deal by the end of this year.

The government has said it is not planning to seek an extension to that deadline in light of the epidemic.

Johnson has faced criticism for initially approving a much more modest response to the coronavirus outbreak than other major European leaders, though he then imposed a lockdown as projections showed half a million people could die.

He tested positive for the virus on March 26.

After 10 days of isolation in an apartment at Downing Street, he was admitted to hospital. He was last seen in a video message posted on Twitter on Friday when he looked weary.

James Gill, a doctor and a clinical lecturer at Warwick Medical School, said the news of Johnson’s admission to intensive care was “worrying” but not completely out of line with other people suffering complications.

“So far we have seen a deterioration in line with other cases of COVID-19 infections,” he said. “Admission to ITU is worrying news, (but) this is not altogether uncommon with this disease, and may be looked at from a positive that the PM is getting the very best care that the NHS (Britain’s state-run National Health Service) has to offer.”

President Trump said all Americans were praying for his recovery, and other world leaders sent messages of support.