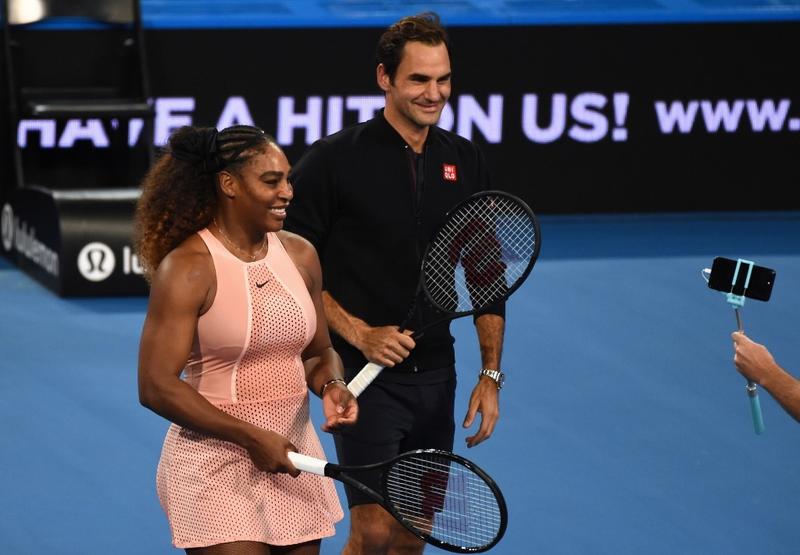 In this Jan 1, 2019 photo, Serena Williams of the US and Roger Federer of Switzerland prepare to take a selfie following their mixed doubles match on day four of the Hopman Cup tennis tournament in Perth. (GREG WOOD / AFP)

MUMBAI - The cancellation of Wimbledon this week has not only fanned the possibility of a total tennis wipeout for the rest of the season but may also have put an end to the Grand Slam title chase for both Roger Federer and Serena Williams.

Roger Federer's next chance at a Grand Slam would be the US Open, scheduled in New York from Aug 31 to Sept 14

Wimbledon was scrapped for the first time since World War Two on Wednesday due to the coronavirus pandemic, with the suspension of professional tennis extended to July 13.

The entire claycourt and grasscourt seasons have been cancelled, with the four-month shutdown wreaking havoc on the finances of the lower-tier players.

Tennis Australia head Craig Tiley has said it would be tough for the sport to return before 2021 while All England Lawn Tennis Club CEO Richard Lewis agreed that it was not unrealistic to believe tennis might be done for the year.

While 38-year-old Federer is well insulated from the shutdown’s financial fallout it could well impact his hopes of adding to his record haul of 20 Grand Slam titles.

The last of Federer’s Slams came at the 2018 Australian Open and the closest he came to adding to his tally was last year’s Wimbledon final.

Federer’s last match was in the Australian Open semi-finals before he underwent keyhole surgery on his knee in February. His next chance at a Grand Slam would be the US Open, scheduled in New York from Aug 31 to Sept 14.

The French Open, an event he has skipped in the past, has been rearranged from May to September — a week after Flushing Meadows.

Australian Todd Woodbridge, a nine-times Wimbledon doubles champion and singles semi-finalist, was unsure what was in store for Federer if the season is lost.

“The question that Roger will have to ask himself is how motivated is he to come back for another year?” Woodbridge told Australian Associated Press this week.

“Or has this actually helped him? But the less match play that you get in this period at that age, it’s so much harder to come back and recover once you start again.

“It has stopped the potential ... of Federer winning one or two more. It becomes very highly unlikely for him.”

While Federer has said he will still be around for Wimbledon next year Williams has been tight-lipped on her future.

She has reached four Grand Slam finals since giving birth to daughter Olympia in 2017 but failed to win any of them.

READ MORE: WTA and ATP postpone all events until July 13

Martina Navratilova, winner of 18 Grand Slam singles titles, says the situation is not ideal for anyone but for players like Williams and Federer the clock is ticking.

“The youngsters are missing a chance to improve and match up against higher-ranked players,” she said. “The middle players are kind of stuck, and the older players like Serena Williams and Roger Federer, time is not their friend.

“So they lost basically this year this opportunity.”