No lockdown needed? Japan stores are shutting down voluntarily 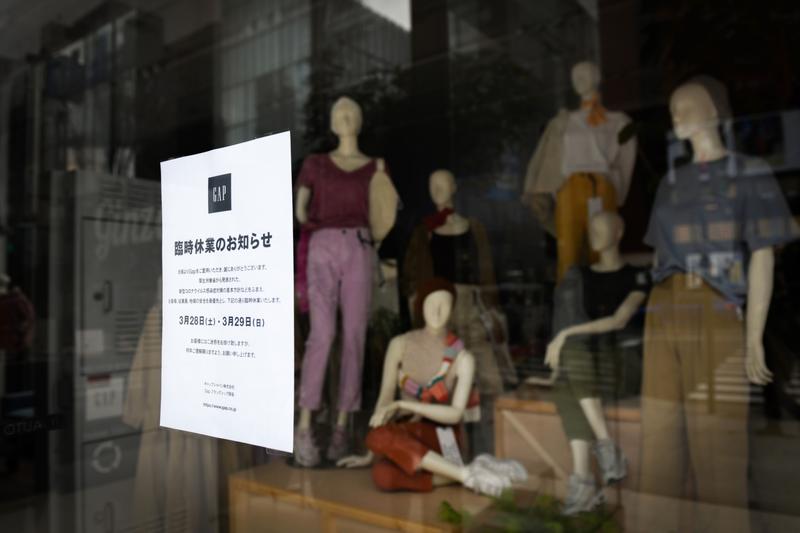 A closure sign is displayed on the window of a Gap Inc. store, temporary closed due to the coronavirus, in the Ginza area of Tokyo, Japan, on March 28, 2020. (NORIKO HAYASHI / BLOOMBERG)

With Prime Minister Shinzo Abe’s government stuck on the brink of declaring a state of emergency that might lead to a lockdown, Japan’s restaurants, bars and chain stores are taking matters into their own hands by voluntarily shuttering hundreds of stores to help curb the spread of the coronavirus.

Across Tokyo this weekend and into next week, karaoke parlors, amusement centers and izakaya bars will be among the retailers closing, in many cases shutting their entire chains nationwide for more than 10 days. The closures join those of cinemas and department stores that didn’t operate last weekend in response to Tokyo Governor Yuriko Koike’s call for people to stay indoors.

Japan’s strategy for dealing with the virus has so far eschewed full-on lockdowns seen in other rich nations; it has the lowest infection rate of the Group of Seven. The country’s authorities lack the power to enact even if a state of emergency is declared. Instead, the country has focused on encouraging people to avoid an overlap of what it calls “Three Cs” — crowded spaces with poor ventilation, crowded conditions with people and conversations in a short distance. 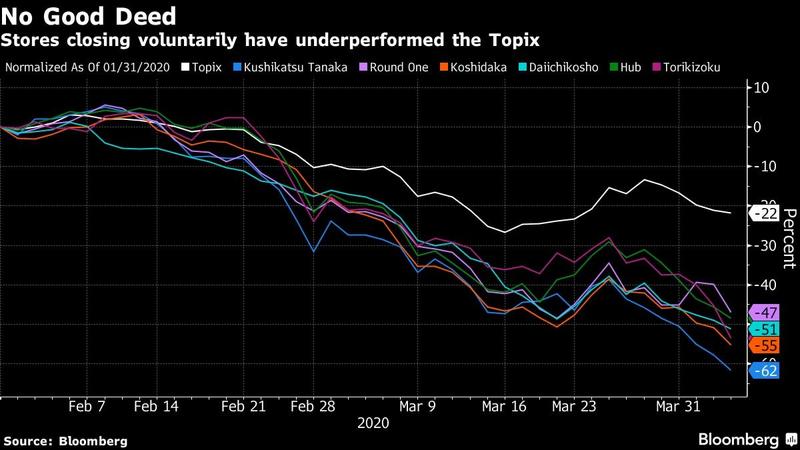 That has prompted locations likely to host those conditions to shut their doors following Koike’s call for people not to go out on weeknights after a series of suspected coronavirus cases were found among those either working or participating in Japan’s seedier nightlife scene. Tokyo saw 97 new coronavirus cases on Thursday, the most yet in a single day.

The choice to close isn’t an easy one to make, particularly for listed companies which have been punished by the market. Amusement center operator Round One Corp. fell as much as 14 percent after announcing it would close all its stores, with its shares down now down by a half this year. Yakitori restaurant chain Torikizoku Co. fell the most since listing in 2014. The government is offering subsidies for companies forced to close stores, so long as they preserve jobs.

READ MORE: Japan to require travelers from US to self-quarantine for 14 days

“The use of trains has dropped,” said Seiichiro Samejima, an analyst at Ichiyoshi Research Institute Inc., pointing to figures that showed an almost 80 percent decline in passengers last weekend in Tokyo. “Customer numbers and sales will drop the same amount. Companies may also be thinking about the employment subsidies.”

The timing of the pandemic couldn’t have been worse. April begins a new year for many universities and companies, which typically see a boost in business from fresh batches of students and employees celebrating at night — with a round of karaoke a typical choice for the after-party. But with the public becoming more aware of the need for social distancing, many have already begun to shun such gatherings.

Some of the closures include:

* Izakaya, bars and restaurants: AP Co. has closed all of its stores nationwide from Thursday, including its popular Tsukada Nojo chain. Torikizoku Co. will close all 394 of its yakitori outlets and Kushikatsu Tanaka Holdings Co. will shutter 116 stores April 4 to April 12. British-style pub operator Hub Co. will close all of its pubs nationwide this weekend; three outlets in Sendai are closed for the time being after being identified as a possible “cluster” of coronavirus cases

* Retailers: Matsumotokiyoshi Holdings said it will close 15 of its drugstores in popular shopping and entertainment districts in Tokyo and Osaka this weekend

* Department stores: Department store operator Isetan Mitsukoshi Holdings said earlier this week it that it would shut its main stores, including 3 flagship outlets in the nation’s capital, on weekends through April 12. Shibuya’s iconic 109 department store, a teen fashion mecca, will close from April 4 to 12

* Others: Round One is closing all 103 of its amusement centers nationwide from Saturday, backtracking on a plan to shut just a handful and reduce hours elsewhere. Pachinko parlor operator Maruhan Co. will close all 16 stores in Tokyo on Saturday and Sunday, but plans re-open at 10 a.m. Monday, according to reports