Ministry pushes for tougher sentences for violation of regulations 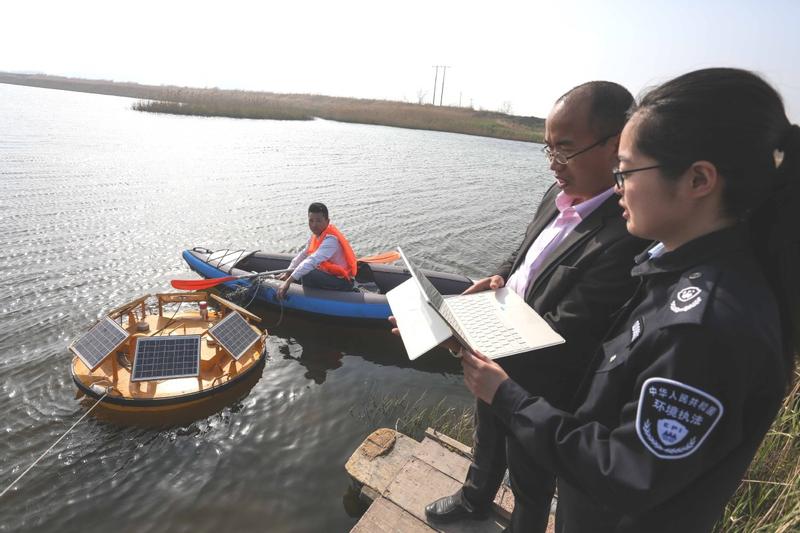 The Ministry of Ecology and Environment, the top environmental watchdog, will make efforts to include falsification of environmental monitoring data in the Criminal Law, as it ratchets up monitoring work.

However, despite the ministry's efforts to improve monitoring work, there were more than 30 cases of people attempting to tamper with data by spraying water over equipment at national-level air monitoring stations last year.

He warned local government officials to abandon any ideas of tampering with the stations as "they will be found if they do", thanks to the overarching supervision system established by the ministry.

"But if anyone does attempt it, I will do my best to see they are sent to prison," the minister added.

He also said spraying water as a way of tampering with monitoring apparatus is pointless, as that will simply raise the humidity level and may increase the concentration of PM2.5, miniscule particles that are a key indicator of air quality.

He said the ministry plans to incorporate falsification of environmental monitoring data in the Criminal Law, making full use of opportunities presented by amendments planned for this year.

Currently, those who tamper with monitoring equipment are charged with the crime of "sabotaging a computer system", in accordance with a judicial explanation from the Supreme People's Court.

In a case in Linfen, Shanxi province, 16 people found guilty of that crime were given prison sentences ranging from six months to two years for tampering with six automatic air quality monitoring stations more than 100 times from April 2017 to March 2018.

The number of national-level air monitoring stations will rise from 1,436 to about 1,800, and about 1,800 new sections of surface water will be brought under monitoring, bringing the total nationwide to 3,700, he said.

According to the China National Environmental Monitoring Center, the country has established an environmental monitoring system that comprises both government bodies and private institutes.

The ministry has established a four-tier environmental monitoring system that consists of more than 3,300 institutes and about 60,000 employees.

Meanwhile, a further 5,000-plus institutes conduct monitoring under the jurisdiction of other government bodies, including the ministries of natural resources and water resources, which employ about 60,000 people in total.

The center also said the number of environmental monitoring companies has reached 3,500 and they employ more than 180,000 people.

Chen Shanrong, head of the national center, said China is expected to establish a highly efficient and unified environmental monitoring network by 2025.