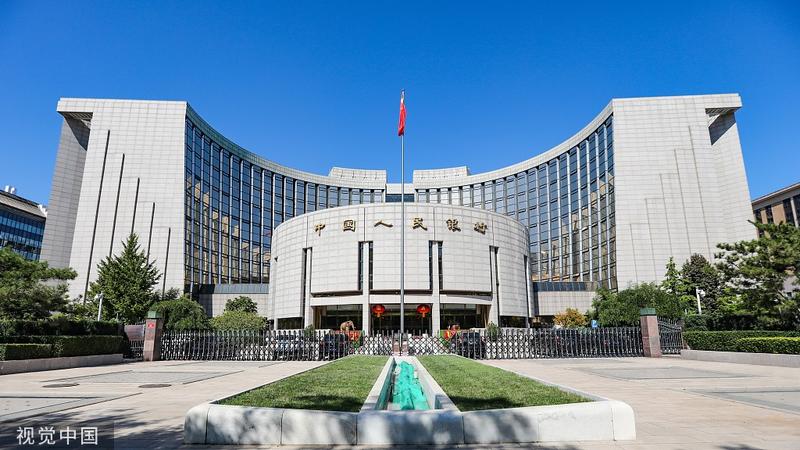 This Sept 24, 2019 photo shows the headquarters of the People's Bank of China, the central bank, in Beijing. (PHOTO / VCG)

China’s central bank cut the interest rate it charges on loans to banks by the biggest amount since 2015 to lower lending costs and offset the economic shock of the COVID-19 outbreak caused by a novel coronavirus.

The People’s Bank of China (PBOC) reduced the interest rate on the 7-day reverse repurchase (reverse repo) agreements to 2.2 percent from 2.4 percent, as it injected 50 billion yuan (US$7.1 billion) into the banking system, according to a statement Monday. The central bank said this will keep liquidity sufficient to help the real economy.

Before Monday's move, the PBOC has skipped reverse repos for 29 straight trading days. A reverse repo is a process in which the central bank purchases securities from commercial banks through bidding, with an agreement to sell them back in the future.

Ma Jun, a member of the monetary policy committee of the PBOC, said the reverse repo rate cut indicates that the central bank has strengthened counter-cyclical adjustments in face of production resumption at home and a worsening external economic environment.

Cutting the reverse repo rate would help lower lending costs for the real economy, said Ma, who believes that adjustments in monetary market rates are now better reflected on market lending rates thanks to the reform of loan prime rate (LPR).

The first cut to a PBOC policy rate since February is in line with a pledge by the Communist Party’s leadership on Friday to increase support to the economy through increased sales of sovereign debt, as domestic and international demand slumps due to the pandemic. The step also brings the PBOC closer in line with the stance of global peers, who have loosened policy dramatically in recent weeks.

“The larger-than-usual rate cut is an expression that China is willing to join the coordinated consortium for economic stabilization,” said Raymond Yeung, chief China economist at Australia & New Zealand Banking Group in Hong Kong. “Small and medium-sized businesses are collapsing for lack of cash flow.” 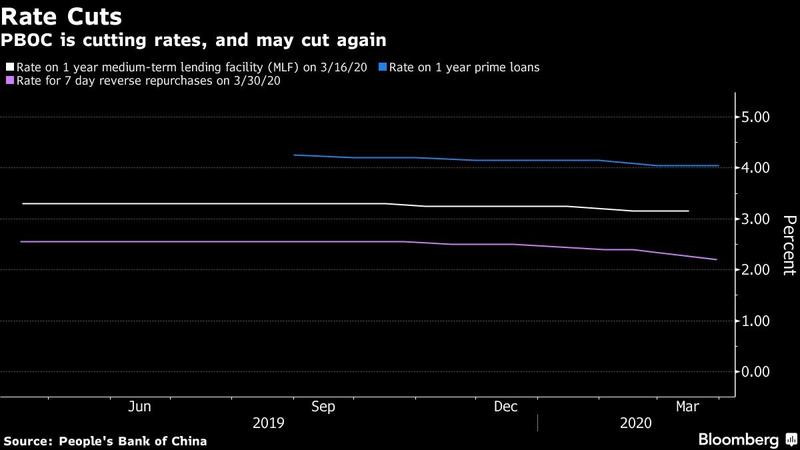 A reduction in the central bank’s main tool to adjust the price of market liquidity also signals coming reductions in its main one-year funding tool, and potentially a corresponding cut to the benchmark deposit rate. Reductions to policy rates should also be reflected in the main market benchmark of the cost of lending to companies, the loan prime rate.

China will increase its fiscal deficit as a share of gross domestic product, issue special sovereign debt and allow local governments to sell more infrastructure bonds as part of a package to stabilize the economy, according to a Politburo meeting on Wednesday, Xinhua reported late Friday.

In a separate statement published late Friday, the PBOC called for better coordination of global macro policies, while re-emphasizing it will keep liquidity sufficient to help with the real economy and watch out for inflation risks.

The PBOC also pledged Friday after a regular meeting of its monetary policy committee to improve its macroeconomic control to limit the fallout of the COVID-19 outbreak and better shore up its economy.

Aside from Monday's rate cut, China still has ample monetary policy space and tools at disposal, Ma said, noting that China remains the only major economy that keeps a normal monetary policy and is able to enhance counter-cyclical adjustments with regular operations.

The leaders of the Group of 20 said last week they were injecting more than US$5 trillion into their economies to fight the effects of the outbreak. Central banks globally have slashed interest rates and started quantitative easing programs.

“Certainly, the policy easing is continuous and today’s liquidity injection at least suggests that the policy aid will be mildly constant and will be more proactive when the authorities deem necessary,” said Zhou Hao, an economist at Commerzbank AG. “The PBOC is signaling its full support on the special bond issuance, so cuts to the medium-term lending rate and benchmark deposit rate are coming. China is joining the global easing wave.”