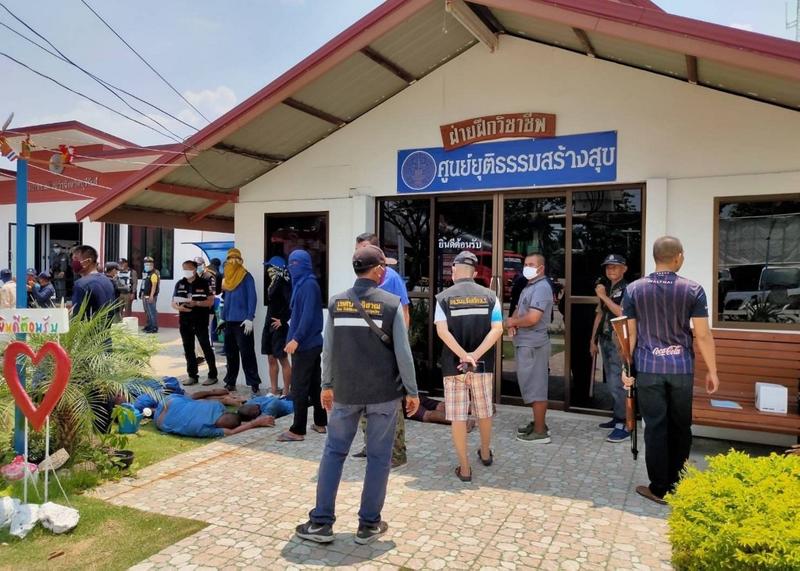 This handout photo taken and released by Thailand Ministry of Justice on March 29, 2020 shows Buriram Prison security personnel looking over a group of inmates on the ground after a jail riot in Buriram. Dozens of prisoners broke furniture and smashed windows during a riot in a Thai jail on March 29 sparked by fears of a coronavirus outbreak in the facility. (HANDOUT / THAILAND MINISTRY OF JUSTICE / AFP)

BANGKOK — A riot occurred on Sunday in a prison in northeastern Thailand as inmates tensed up for the fear of COVID-19 infection and set the prison on fire with four of them having escaped, police said.

About 100 inmates staged the riot in the prison and set it ablaze in downtown area of Buriram province, about 390 kilometers northeast of Bangkok

About 100 inmates staged the riot in the prison and set it ablaze in downtown area of Buriram province, about 390 kilometers northeast of Bangkok, confirmed deputy National Police spokesman Pol. Col. Krissana Pattanacharoen.

Five inmates broke out of jail but one of them was arrested by the police outside the prison, leaving the four others at large, the deputy police spokesman said.

Those inmates apparently revolted for fear of COVID-19 infection in the crowded prison, which currently is home to about 2,100 inmates, according to Pol. Col. Krissana.

They set ablaze the prison's sleeping quarters, canteen and furniture workshop, prompting firefighters to scramble to the scene and put it out.

The situation was finally put under control with two inmates being seriously injured by gunshots fired by the police.

The police were combing the prison's neighborhood and elsewhere for the fleeing inmates.