Shoring up the coastlines

Hong Kong is soon to have its first eco-shoreline, which is beneficial for marine life as well as to the city’s development. Joy Dong reports. 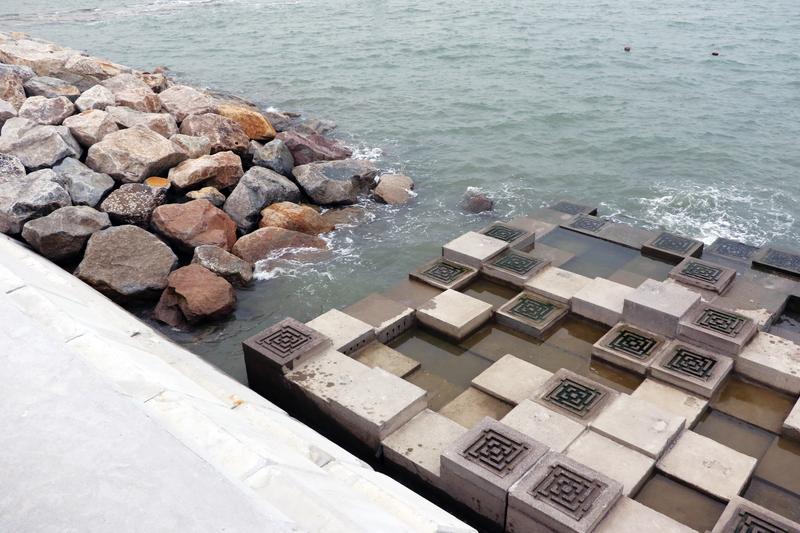 ‘When asked to pick only three items of furniture or electronics for your apartment, most people will choose a comfortable bed, an air conditioner for summer time, and a fridge to store food,” said Kenneth Leung Mei-yee, marine biologist at the University of Hong Kong, “So do marine organisms.”

Leung is advising on the construction of Hong Kong’s first eco-shoreline, which is expected to be 3.8 kilometers long and completed by 2023 as a part of Tung Chung New Town Extension Reclamation Project. The new shoreline rocks, coupled with an extra layer of mangroves, provide more livable resting space that comes with lower temperatures and sources of nutrition for microorganisms. Rocks on the new shoreline are to marine organism what apartments are to humans, Leung said.

The traditional engineering project only minimizes the negative influence on nature, but now we are stepping up efforts to improve biodiversity

“From our past study, the traditional shoreline, of bare rocks, would be as hot as 50 C when exposed to direct sunlight at low tide. Any creature left on the rocks would be burned to death but new types of concrete rocks can hold cool sea water in their porous, sunken surface.”

Leung added that the regular concrete is also too smooth for marine life to hold on to and has an unfriendly pH value because it’s intended to protect the metal bars inside from erosion by sea water. Now the scientists imported eco-friendly concrete, “ECOncrete”, from Israel, which costs up to HK$10,000 (US$1,283) per cubic meter. Given the high cost, the scientists had similar rocks manufactured in Hong Kong, with lower pH value and more specially designed carving and holes.

The 3.8 km-long eco-shoreline will cost HK$60 million more compared with traditional eco-shoreline, according to Sustainable Lantau Office, the government office in charge of the eco-shoreline project. 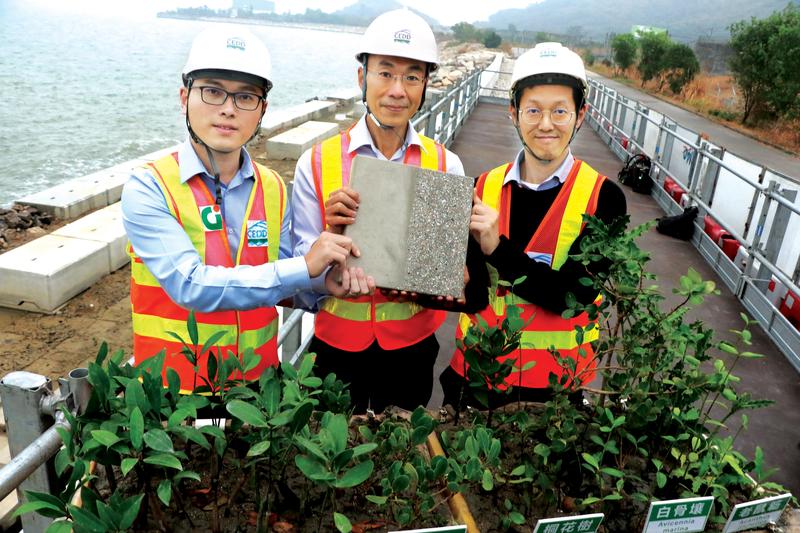 Engineers holding an eco-tile pose for a photo behind a showcase of mangrove plants. (JOY DONG / FOR CHINA DAILY)

The benefits of eco-shorelines can extend into the human environment. Hong Kong is home to extraordinarily diverse forms of subaqua life. There are nearly 6,000 species, accounting for one quarter of all that is found around the whole of China. Considering that Hong Kong’s sea surface amounts to just 0.03 percent of the national total, the density of life is amazing. Most city dwellers, however, are unaware of the diversity, because city life becomes a barrier between people and the surrounding ocean. Even joggers along the concrete promenade have limited access to the seaside as vertical concrete banks that cut right into the water simply separate people from the view of seawater just meters below.

Imagine a different scene, strolling in a park at sunset, slowly descending staircases leading to the seaside with patches of creatively designed eco-rocks. People out for a stroll can sit on rocks near the mangroves, enjoy a snack and savor a moment of peace. The LED billboards on top of high-rises across Victoria Harbour light up one by one, while schools of wild fish gather around to devour some crumbs. It would seem a refreshing change.

The reality may not be too far off. The eco-shoreline’s early trial cases proved successful in sustaining biodiversity. 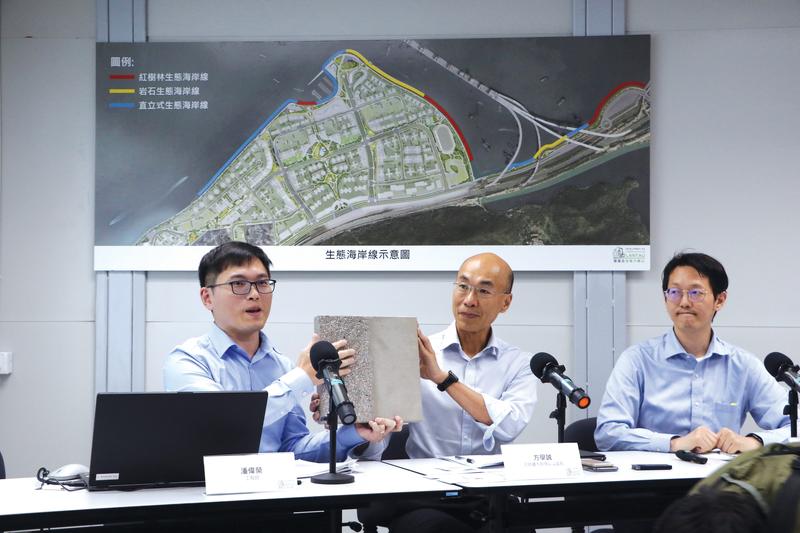 According to Pun Wai-wing, engineer of Hong Kong’s Civil Engineering and Development Department, based on established eco-shoreline examples abroad, trials took place at several locations around Hong Kong, including Siu Ho Wan and Sai Kung. Several marine animals like crabs and clams were found taking shelter in the months after its installation. In sunlight, the plain-looking eco-tiles release oxygen bubbles from photosynthesis of algae attached to its surface. That’s something rarely seen with normal concrete.

“The pilot shoreline is never going to be a dull or singular bank.” Pun added that three types of sea bank are planned, for different seascapes — mangrove bushes, ECOncrete bank and a regular vertical bank with extra porcelain plates.

Mangrove areas will be most useful for consolidating banks and providing food and shelter to sea creatures. But mangrove can only thrive where the water salinity is comparatively lower. That limits size of the mangrove bank. Engineers also put baskets of empty oyster shells in the shallow banks as extra shelter for microorganisms. ECOncrete cubes, shaped like huge toy blocks with small holes and curved surfaces, will create aesthetic appeal for the eyes of local residents when taking a stroll. The regular vertical banks, mostly serving the practical purposes of piers or public promenades across Hong Kong, will also be equipped with tiny extruding porcelain plates and small holes on the bank walls for sea creatures. 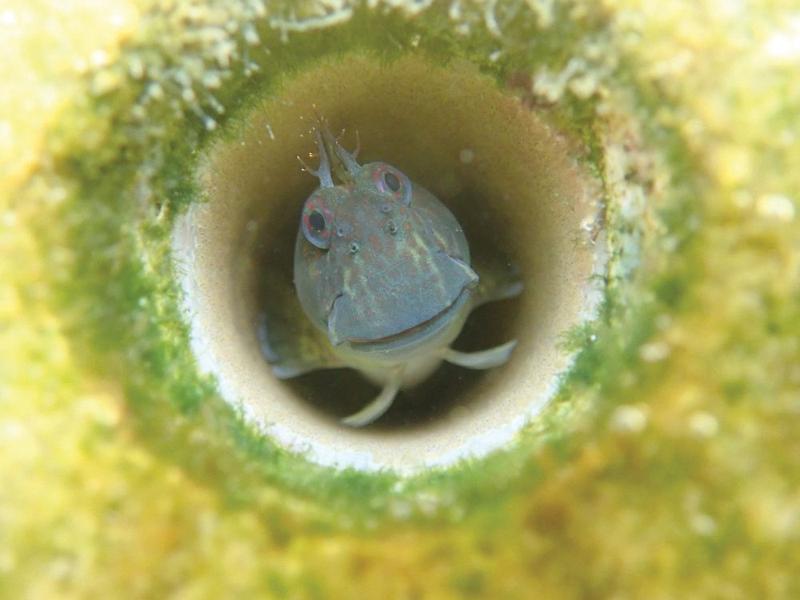 Michael Fong Hok-shing, head of the Sustainable Lantau Office, stressed that the new design is groundbreaking for Hong Kong. “It’s a bold venture. The traditional engineering project only minimizes the negative influence on nature, but now we are stepping up efforts to improve biodiversity.” Now that the early stage experiments proved the design to be doable, with the joint efforts of engineers, biologists, landscape designers, conservation lobbyists and scholars, more new projects are expected to adopt the new practice. “The eco-shoreline is definitely the future,” Fong concluded.

However, from the perspective of environmental p rotection non-governmental organizations like Green Sense, this neatly presented narrative has an inconvenient twist. Since the eco-shoreline is part of a reclamation project, the Tung Chung New Town project, it will reclaim 130 hectares from the sea, improving the shoreline can’t change the fact that the reclamation is just 1 kilometer away from the nearest marine conservation park. Green Sense believed that a growing number of reclamation engineering ships will impede the activities of the endangered Chinese white dolphins. 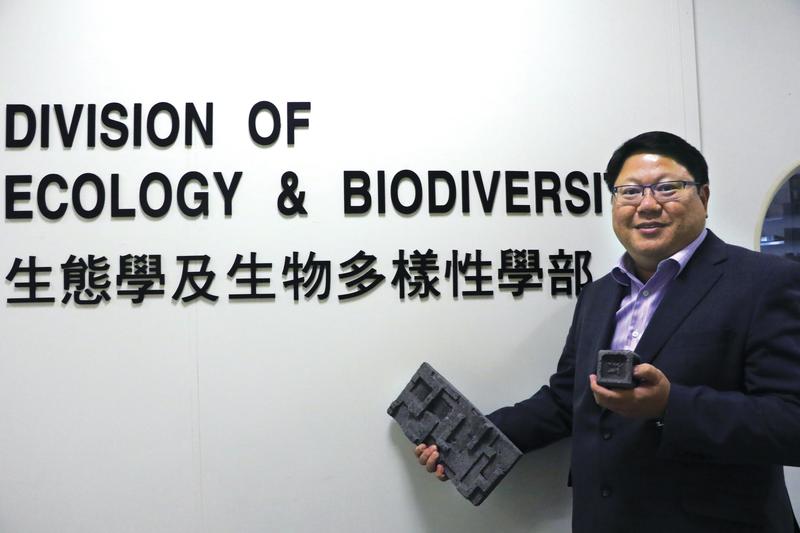 Often cited as an important benchmark for reclamation projects’ environmental impact, the Chinese white dolphins’ population in Hong Kong has dropped drastically in recent years, from more than 200 to fewer than 30. Many attribute the declining population to major development projects, like the Third Runway at Hong Kong’s International Airport and the Hong Kong-Zhuhai-Macao Bridge.

Leung, on the other hand, is not quite as pessimistic. “Dolphins are very smart animals and they swim away to follow the fish. Dolphins don’t have boundaries. They don’t need passports.” He continued that in the entire Ling Ding Yang of Pearl River Estuary that connects Hong Kong, Macao and Zhuhai, the number of Chinese white dolphins is very healthy, and reaches over 900.

Leung believed the Hong Kong government has done a good job of protecting the sea. Banning trawl fishing in 2012 was regarded as a remarkable step. Another evident conservation statistic is that, compared with the mainland which has overdeveloped 34 percent of its natural shoreline, 84 percent of Hong Kong’s shoreline remains untouched.

“I’m not saying we should destroy the coastline. We shouldn’t remove the natural shoreline as far as possible, because the natural coastline evolved over billions of years. I don’t support the Lantau Tomorrow Vision project, personally. But if the majority make the decision saying we should go ahead (with the reclamation), in those circumstances, we need to think about mitigation measures. But not the other way around, we can’t reclaim the sea as much as we like just because we are able to create an eco-shoreline.”

Hong Kong, like many coastal cities around the world, relies on reclamation for land expansion. Previous reclamations like Wan Chai and Shau Kei Wan all turned into important business and residential hubs. Chief Executive Carrie Lam Cheng Yuet-ngor proposed a grand plan — Lantau Tomorrow Vision project — in 2018, to deal with the city’s land shortage, reclaiming thousands of hectares from the sea.

Leung said, from the perspective of a marine biologist, there always are new methods to balance social-economic needs and the protection of wild life. One of the creative solutions is Very Large Floating Structures, a joint connection of floating parts that only uses the top surface of the sea.

“In Singapore, they build a floating structure for a basketball court by the sea like a ship without an engine. You can even build houses on it... So for the Lantau Tomorrow Vision project, instead of reclaiming thousands hectares from the sea, we could just reclaim 600 hectares for houses. But for all the other temporary facilities, we could use floating structures. That way we can save hectares of the sea and the marine life living in it.”