UN chief seeks trillions in stimulus in response to virus 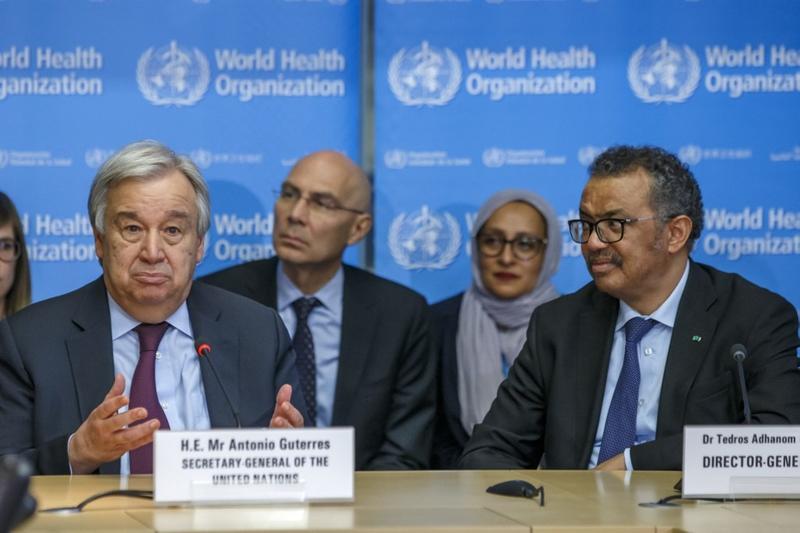 In this Feb 24, 2020 photo, UN Secretary-General Antonio Guterres (left) sitting next to Tedros Adhanom Ghebreyesus (right) Director General of the World Health Organization (WHO), speaks during an update on the situation regarding the COVID-19 in the SHOC room (Strategic health operations centre) at the World Health Organization (WHO) headquarters in Geneva. (SALVATORE DI NOLFI / POOL / AFP)

UNITED NATIONS - UN Secretary-General Antonio Guterres has asked leaders of the Group of 20 (G20) to help launch a stimulus package in the trillions of dollars to keep businesses, workers and households afloat in face of the coronavirus.

I urge G20 leaders to consider the urgent launch of a large-scale, coordinated stimulus package in the trillions of dollars to target the direct provision of resources to businesses, workers and households in those countries unable to do so alone.

By the end of this year, the cost of this pandemic is likely to be measured in the trillions of dollars, Guterres told G20 leaders in a letter dated March 23.

The response of G20 leaders must be decisive and commensurate. It must inject massive resources into economies, reaching double-digit percentage points in the world's gross domestic product, he said in the letter, which was released on Tuesday.

Guterres warned that "business-as-usual" economic rules and policy tools no longer apply as the virus has created unprecedented challenges.

Unlike in 2008, this is not a banking crisis. While the liquidity of the financial system must be guaranteed, there is a need to focus on people: families, low-wage workers, small and medium-sized enterprises and the informal sector, said Guterres.

Important steps have already been taken by developed countries in this direction, but more needs to be done, he said. "I urge G20 leaders to consider the urgent launch of a large-scale, coordinated stimulus package in the trillions of dollars to target the direct provision of resources to businesses, workers and households in those countries unable to do so alone."

The G20, accounting for 85 percent of the world's gross domestic product, has a direct interest and critical role to play in helping developing countries cope with the crisis, he said. "If we allow the virus to spread like wildfire across the globe, its eradication will remain elusive."

The G20 can help provide immediate liquidity relief to the private and financial sector in the developing world in the form of trade credits, liquidity lines and guarantee schemes, he said.

Today, the resources available to the International Monetary Fund (IMF) are insufficient to address this crisis of unprecedented proportion, and must be increased, he noted.

Debt restructuring must also become a priority -- including immediate waivers on interest payments for 2020, he said.

Financial support to the IMF Catastrophe Containment and Relief Trust is another critical venue to help the poorest countries with immediate debt relief, he noted.

Further coordination among major central banks could help ease swap lines and provide liquidity in the financial system, especially in emerging economies and developing countries. The cost of remittances -- a lifeline in the developing world -- should be brought as close to zero as possible, said Guterres.

He said he will be launching a humanitarian appeal focused primarily on 40 of the most vulnerable countries, where the impact of COVID-19 on people will be particularly severe. He urged G20 leaders to contribute generously to this appeal.

The secretary-general wrote to all G20 leaders ahead of their virtual G20 summit scheduled for Thursday. Guterres would participate in the virtual summit.