HK govt to set up hotlines for reporting quarantine violators 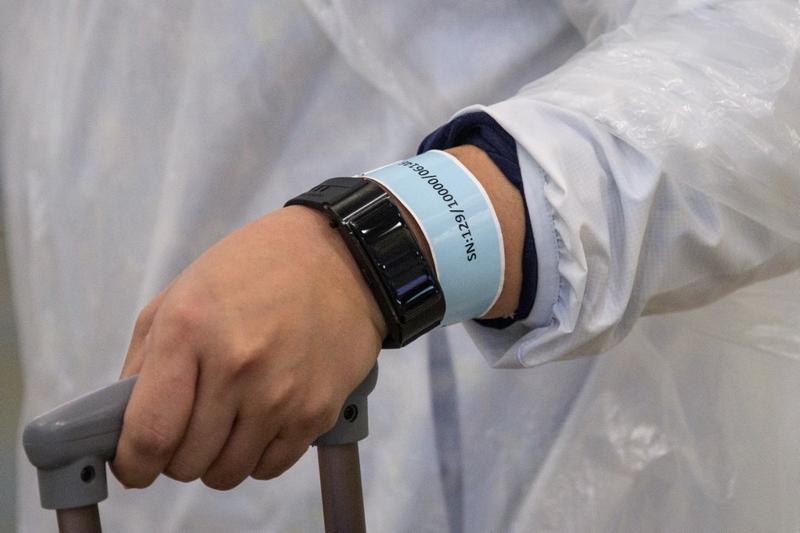 A newly arrived passenger wears a quarantine tracking wristband (blue) to monitor new arrivals as a measure to stop the spread of the COVID-19 at Hong Kong’s international airport on March 19, 2020. (ANTHONY WALLACE / AFP)

HONG KONG - Chief Executive Carrie Lam Cheng Yuet-ngor said on Tuesday that the government would soon set up hotlines for the public to report violations of home quarantine orders.

Speaking to reporters ahead of the weekly Executive Council meeting, Lam said people breaching the 14-day mandatory home quarantine order to go out shopping and doing other things will put the society at greater risks.

“This is (Violating a home quarantine order) an irresponsible behavior,” Chief Executive Carrie Lam said, urging people quarantined at home to fulfill their social responsibilities by observing the order

“This is an irresponsible behavior,” she said, urging people quarantined at home to fulfill their social responsibilities by observing the order.

According to Lam, every day, about 6,000 to 7,000 people in Hong Kong are placed under home quarantine.

Those found to have violated the policy will be arrested immediately without warning. At least four violators will be prosecuted this week.

In response to a proposal to keep all arrivals in quarantine centers, Lam noted that the government must reserve adequate facilities for those who have close contacts with patients of confirmed cases, as they are at higher risk of contracting the virus.

Lam also called on the public to exercise self-discipline to limit nonessential social contacts, saying it is one of the "best solutions" to avoid infection.

The other government’s priority is to address the risk of the virus spreading in public places such as bars and restaurants, said Lam. About 10 confirmed COVID-19 cases were related to clubbing and drinking in bars.

Lam also called on the public to exercise self-discipline to limit nonessential social contacts, saying it is one of the "best solutions" to avoid infection

The government is studying the existing regulation to restrict the business hours of the restaurants and customers seating arrangements, said Lam. The government does not rule out suspending all restaurant services if necessary, she said.

On Monday evening, a 13-year-old girl wearing an electronic tracker wristband was found having a meal at a restaurant in Sha Tin. Police were alerted around 10 pm. The girl was believed to have taken a taxi from the airport to a hotel in Sha Tin. But she dined at a restaurant with another man before checking into the hotel. Police located the girl at the hotel of Courtyard by Marriott Hong Kong Sha Tin. She was then taken to the Chun Yeung Estate in Fo Tan for quarantine on suspicion of violating the quarantine order.

Police received another report on early hours of Tuesday that a man wearing home quarantine wristbands was dining with friends in Tsuen Wan. The man was found to have a fever and was taken to the hospital.

Both restaurants announced a full-day suspension of service on Monday to carry out disinfection.