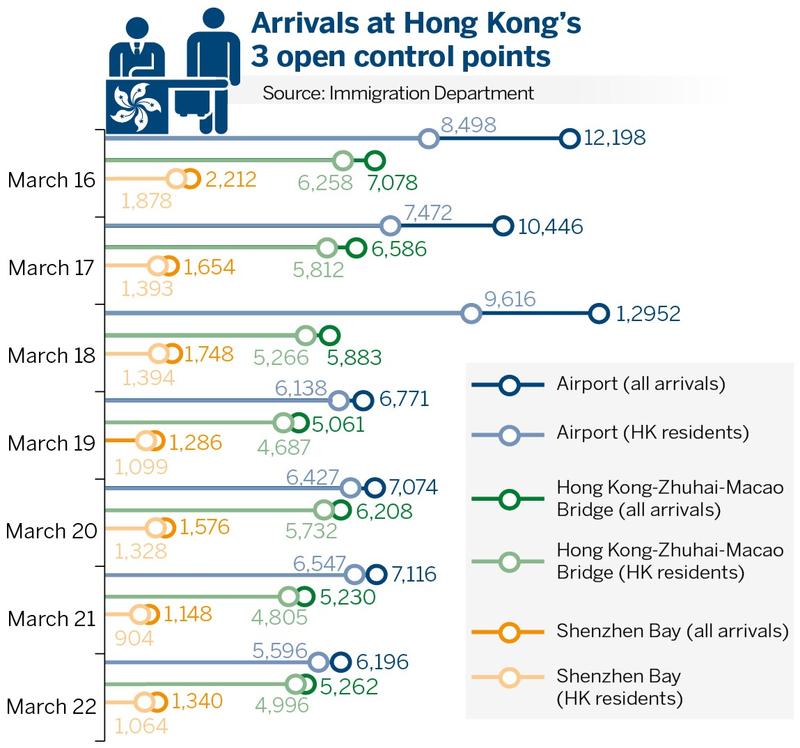 Experts are calling for the wearing of full protective gear by all medical workers and front-line employees at the city’s airport as many more Hong Kong residents are expected to return to the city from overseas.

The suggestions came after a doctor with the Hospital Authority and an employee of Starbucks, both of whom recently worked at Hong Kong International Airport, were confirmed on Monday to be infected with the virus.

All medical workers who work at the airport should wear full protective gear, including protective gowns, face shields, surgical masks and gloves

Leung Chi-chiu, chairman of the Advisory Committee on Communicable Diseases under the Hong Kong Medical Association

Leung Chi-chiu, chairman of the Advisory Committee on Communicable Diseases under the Hong Kong Medical Association, said current preventive measures at the airport are unsatisfactory.

The doctor, who specializes in the respiratory system, said the aviation hub has become a place of high risk amid the pandemic, which is wreaking havoc around the world as thousands of passengers from overseas arrive at the airport every day.

According to the Immigration Department, the daily arrival volume at the airport control point is the highest of Hong Kong’s three remaining open checkpoints. This is despite the city putting all inbound travelers since Thursday under a 14-day quarantine.

Under current practice, arrivals are screened initially at the airport. Arrivals found with respiratory symptoms are sent to one of two temporary testing centers to have specimens taken for virus tests by medical workers. Asymptomatic people from virus-stricken regions are given a container to collect deep throat saliva at home, and then have the samples sent to the government’s designated clinics.

Hence, the medical employees sent to the airport are the first ones to be in contact with these arrivals from abroad. The medical workers in charge of different tasks are given varying protective gear under different requirements.

According to the Department of Health, the doctor who became infected was responsible for issuing the quarantine orders and answering queries from the public. She wore a protective face shield, surgical masks and gloves during the process.

The authority is still investigating the source of transmission to the doctor.

Speaking at a news conference on Monday, Wong Ka-hing, controller of the Centre for Health Protection of the Department of Health, said the authority will review prevention measures adopted at the airport and improve them.

Leung said it will be necessary for nonmedical workers at the airport, including employees from some eateries that have direct contact with customers, to wear protective gowns if more front-line employees are found to have contracted the virus.

He also urged passengers to wear surgical masks. For those wearing protective gowns, Leung suggested they be handled in an appropriate way to avoid cross-infection.

But Lam Ching-choi, a non-official member of the Executive Council, said it is unnecessary for passengers to wear protective gowns as there would be higher risks of infection if the gowns were not taken off and discarded properly.

Lam also said more training for medical staff and other front-line workers about how to put on and take off the protective gear are needed as there is a high risk of infection during this process.

Moreover, the authority needs to set up a surveillance mechanism to supervise whether all employees strictly comply with requirements when putting on and taking off their protective gear, Lam added.