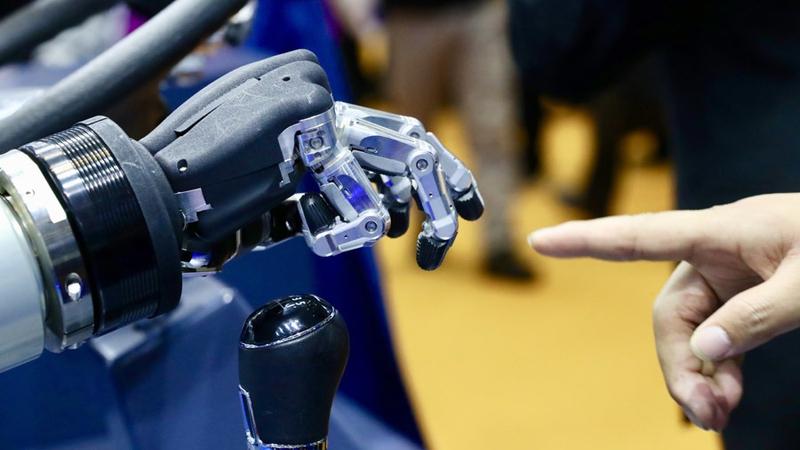 A visitor touches an automated hand at an exhibition during the second CIIE in Shanghai on Nov 6, 2019. (PHOTO BY ZHU XINGXIN / CHINADAILY.COM.CN)

As China increases its R&D expenditure, it also has made great progress in its science and technology, according to the report "The State of US Science and Engineering 2020" by the National Science Foundation, or NSF.

The report shows that in 2017, China spent US$496 billion on research and development, following closely behind US R&D expenditure of US$549 billion.

The report shows that in 2017, China spent US$496 billion on research and development, following closely behind US R&D expenditure of US$549 billion

China's share of published science and engineering papers has risen tenfold, from 5 percent of the world's total in 2000, to 21 percent in 2018. And China's output in terms of absolute quantity exceeded the United States' output of 17 percent.

Publications receiving more citations is another indicator of impact and achievement. In that regard, China's index more than doubled, from 0.37 in 2000, to 1.1 in 2016, indicating rising impact in the science and engineering field.

The emphasis on scientific research varies from country to country. And among the largest producers in 2018, the US and the EU each produced more biomedical and health sciences articles than did China. However, China ranked No 1 in the production of engineering articles－more than twice as many engineering articles as the US.

The report also shows that about 23 percent of research resulted from international collaboration. In the US, 26 percent of science and engineering publications are from collaboration, and China is the top collaborator of the US.

When it comes to value-added output of high R&D-intensive industries, the data showed that China also made impressive progress. In 2003, China's high-intensive industry output accounted for only 6 percent of the global total.

In 2018, China's output had grown to 21 percent, surpassing the European Union's 19 percent. The US continued to hold the No 1 spot at 32 percent, down from 38 percent in 2000, primarily due to China's increased share.

When it came to value-added output of medium-to-high R&D-intensive industries, China's output ranked No 1, with 26 percent of the global total in 2018, up from 7 percent in 2003.

The report concluded that the US continued to lead globally in R&D expenditure and in the number of highly cited research publications. But at the same time, other nations, particularly China, are rapidly developing their science and engineering capabilities. As a result, the US is playing a less dominant role in many areas of science and engineering activity.