Sports events around the world hit by coronavirus pandemic 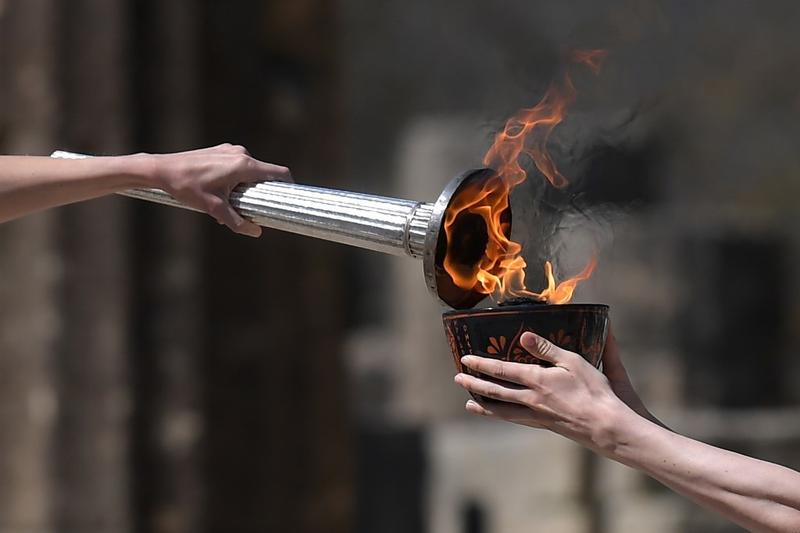 Major sports events around the world that have been hit by the coronavirus pandemic:

The Tokyo 2020 Olympics torch lighting ceremony in ancient Olympia was held without spectators.

The Olympic Games flame handover in Athens will be done in an empty stadium on March 19.

The Hellenic Olympic Committee suspended the remainder of the torch relay through Greece to avoid attracting crowds.

US trials for wrestling (April 4-5) were postponed.

US Rowing postponed its team trials.

US diving trials (April 3-5) were postponed. All USA Diving events postponed for next 30 days.

ALSO READ: CONMEBOL: Libertadores, Sudamericana suspended until at least May

Court of Arbitration for Sport

The Court of Arbitration for Sport said all cases were being put on hold until May. No in-person hearings will be held before May 1.

The NBA suspended its season.

The NHL suspended its season.

The MLB further delayed its 2020 season’s opening day of March 26 after CDC calls for gatherings of 50 or more people to be canceled or postponed for eight weeks.

Boston Marathon organizers postpone the race from April 20 to Sept 14.

The National Hockey League told players, including those from outside North America, they can return home and should self-quarantine through March 27, lengthening the period the NHL had said it was pausing its season.

This year’s Copa America, originally scheduled to take place from June-July in Colombia and Argentina, was postponed to June 11-July 11, 2021.

FIFA has agreed to delay the first edition of its revamped Club World Cup due to be held in 2021.

UEFA has put all club and national team competitions for men and women on hold until further notice.

All elite soccer matches in England, including the Premier League, Football League and Women’s Super League, were suspended until April 4.

Germany’s Bundesliga and second division will pause at least until April 2.

The Bolivian Football Federation on Monday suspended all play until at least March 31.

UEFA postponed all Champions League and Europa League matches due to take place between March 17-19.

South America’s two biggest club competitions, the Copa Libertadores and Copa Sudamericana, were suspended until at least May 5.

The CAF postponed two rounds of the 2021 Africa Cup of Nations qualifiers (March 25-31).

CONCACAF suspended all competitions, including the Champions League and men’s Olympic qualifiers.

The top two tiers of French football — Ligue 1 and Ligue 2 — were suspended.

All matches in Spain’s top two divisions were postponed for two weeks.

England’s friendly internationals against Italy and Denmark at Wembley (March 27 and 31) will not take place.

All soccer in the Netherlands was suspended until the end of March.

New seasons in the Chinese, Japanese and South Korean leagues were postponed.

Australia’s A-League banned fans from matches for the rest of the season.

The Mexican soccer league said all matches in the top-flight, second tier and women’s league were suspended until further notice.

The state championships of Rio de Janeiro and Sao Paulo, the two biggest in Brazil, were suspended on March 16, the former for 15 days and the latter until further notice.

All events organized by the Russian Football Union, including Russian Premier League fixtures, between March 17-April 10 were canceled.

International archery has been suspended until April 30, which will affect qualification for the Tokyo 2020 Olympics.

The Diamond League postponed its first three meetings of the 2020 season due to be held in April and May in Qatar and China.

The World Athletics Indoor Championships (Nanjing, March 13-15) were postponed. They will be held in the same city from March 19-21, 2021.

The Paris and Barcelona marathons were postponed.

The Penn Relays (April 23-25), were canceled for the first time in the event’s 125-year history. The Mt. SAC Relays and Florida Relays, also scheduled for April, and the March Texas Relays, were all canceled.

The final qualification tournament in Taiwan for the Olympics was put back from April to June 17-21, while the March 22-26 qualification event in Arizona was postponed.

Japan’s professional league postponed the start of the season.

The European, American and final world qualifying boxing tournaments for the Tokyo Olympics were suspended on March 16. The European qualifier in London that was underway and due to run to March 24, ended after the evening session on March 17.

The International Canoe Federation has either postponed or canceled competitions scheduled between now and the end of May. Continental Olympic qualifiers in sprint, slalom and paracanoe were hit.

The last two games of Australia’s three-match one-day international series against New Zealand in Sydney and Hobart were canceled.

The start of the Indian Premier League T20 tournament (March 29) was postponed until April 15.

The boards of India and South Africa agreed to reschedule a three-match ODI series to a later date. The first match on March 12 was washed out.

The final leg of Bangladesh’s tour of Pakistan, which involved a test match and an ODI in April, was postponed.

Zimbabwe and Ireland agreed to postpone a six-match series scheduled for Zimbabwe in April. Zimbabwe has suspended all forms of cricket in the country.

New South Wales were named Australia’s Sheffield Shield champions after the competition’s final round was called off.

Cycling’s governing body plans to retroactively use March 3 as the cut-off point for Olympic qualification in mountain bike, BMX Racing and BMX Freestyle.

The final two stages of the UAE Tour were canceled after two Italian participants tested positive.

The Paris-Nice cycling race ended a day early after the eighth stage into Nice was canceled.

The Giro d’Italia, scheduled to start in Budapest, Hungary on May 9, was postponed.

The Paris-Roubaix, Liege-Bastogne-Liege and the Tour de Yorkshire Race men’s and women’s races have been postponed.

All cycling races up to the end of April have already been canceled and riders in France and Spain, where many are based, have been explicitly told they cannot train outside.

The year’s first major, the Masters, was postponed from April 9-12 to “some later date”.

The second major, the May 14-17 PGA Championship, was postponed, with hopes of rescheduling in the summer.

The Players Championship in Florida was canceled after the first round. The PGA Tour also scrapped all events until at least May 10.

The Honda LPGA Thailand event and the HSBC Women’s World Championship in Singapore were canceled.

The next three LPGA Tour events scheduled for Arizona and California were postponed.

The European Tour postponed five events, through until the April 30-May 3 Andalucia Masters.

The Kentucky Derby, the first jewel in North American horse racing’s Triple Crown (May 2) was postponed to Sept. 5.

The Swedish Ice Hockey Association ended the 2019-20 season with no playoffs, no champions, no promotion and no relegation.

The Kontinental Hockey League declared a week-long break to create a new format for the second round of its playoffs involving six Russian teams.

Two non-Russian teams — Barys Nur-Sultan (Kazakhstan) and Jokerit Helsinki (Finland) — had withdrawn on government advice to fight the coronavirus in their countries.

The International Judo Federation canceled all Olympic qualification events until the end of April.

Formula One canceled the Australian Grand Prix and postponed the next three races in Bahrain, Vietnam and China.

They hope to start the season in Europe at the end of May, putting the Dutch and Spanish races scheduled for May 3 and 10 in Zandvoort and Barcelona in doubt.

Four rounds of the MotoGP season — Qatar, Thailand, Texas and Argentina — will not go ahead as scheduled.

NASCAR postponed all race events through May 3, including races at the Atlanta Motor Speedway (March 15) and Homestead-Miami Speedway (March 22), but intends to run all 36 races this season.

Round four of the World Rally Championship in Argentina (April 23-26) was postponed.

The World Rallycross Championship opener in Catalunya-Barcelona (April 18-19) was postponed.

Rally Mexico was cut short after the second leg.

The seventh round of the FIA World Endurance Championship, scheduled for April 23-25 in Spa, Belgium, has been postponed.

The Isle of Man canceled the annual TT motorcycle races that were to be held from May 30-June 13.

The rest of the modern pentathlon World Cup season was postponed until May.

Two World Rowing Cups and the European Olympic Qualification Regatta, all scheduled for Italy, were canceled.

The annual Boat Race competition, set for March 29 on the River Thames in London, was canceled.

The Singapore and Hong Kong legs of the World Rugby Sevens Series were postponed from April to October.

Rugby Europe announced a suspension of all its matches and tournaments from March 13-April 15.

The English Rugby Football League and Super League suspended all fixtures until April 3.

Rugby Australia locked down its headquarters to be disinfected after two members of the national sevens program were tested.

World Snooker postponed the Tour Championship that was to be held in Llandudno, Wales, from March 17-22.

It extended the suspension of all events, camps and conferences that require people to travel and gather through April 30.

The British Swimming Championships from April 14-19, which were set to double as the Olympic trials, were canceled.

Swimming New Zealand postponed its Open Championships, an Olympic qualification event scheduled to start in Auckland on March 31, to June.

The French Open was postponed until Sept. 20-Oct. 4.

The ATP and WTA suspended the season through to June 7, affecting the claycourt swing. Tournaments in Madrid, Rome, Munich, Estoril, Geneva, Lyon, Strasbourg and Rabat will be hit.

The BNP Paribas Open in Indian Wells was canceled.

The International Triathlon Union suspended all activity until April 30.

USA Water Polo canceled several events, including the FINA Men’s and Women’s Intercontinental Tournament, which was supposed to take place from April 28 through May 3.

The World Cup finals in Cortina were canceled along with the last three women’s races in Are.

The women’s world ice hockey championships in Canada were canceled.

The speed skating world championships in Seoul were postponed until at least October.

The March 16-22 world figure skating championships in Montreal were canceled.