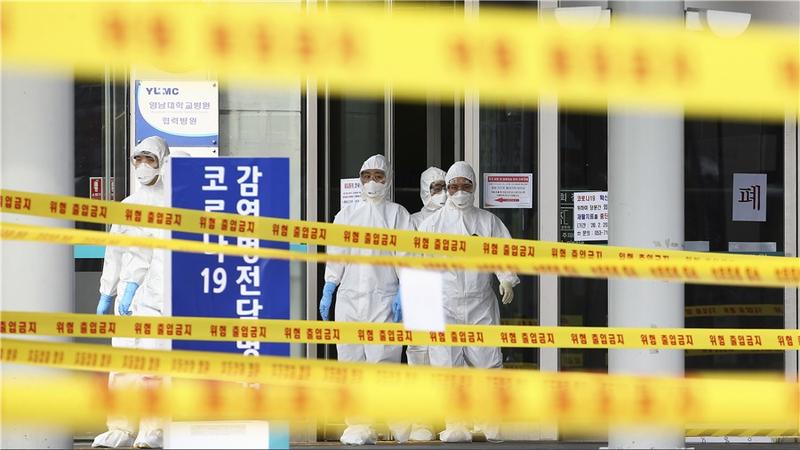 Editor's note: Nations are collaborating in the fight against the novel coronavirus pneumonia outbreak to limit the damage to people's health and the impact on the global economy. Here, in the third part of a series titled "One World, One Fight", we look at how countries can work together.

On the evening of Feb 28, when Chen Yangxue returned to her home in downtown Seoul from her job at a trading company, she saw a notice on the door stating: "We kindly ask you to visit a nearby health institution to test for the novel coronavirus."

Chen, who is from Weihai, Shandong province, and has lived in the South Korean capital for more than 10 years, said, "When I saw the notice, I felt very nervous because I had heard on the news that the outbreak in South Korea was the worst outside of China."

She said she rang the consultation number on the notice. After giving her address, a staff member at the Korea Centers for Disease Control and Prevention, or KCDC, said that a resident living in Chen's neighborhood was a "suspected case" and all residents in the community must be tested.

"The staff member said the entire test would take less than 10 minutes, the results would be sent to my phone, and the process would be free," Chen said.

Two days later, she received a message on her phone stating that she had tested negative. "I felt hugely relieved," she said.

Chen said she was very lucky, as on the day she took the test－Feb 29－South Korea reported 909 new cases of novel coronavirus pneumonia, the highest number confirmed in a single day, according to the KCDC.

On Saturday, President Xi Jinping sent a message to his South Korean counterpart Moon Jae-in, expressing thanks for the aid sent to China by its close neighbor.

"The virus knows no borders, and in turn, China knows just how much pain South Korea feels", Xi said, adding that China will continue to support its neighbor's efforts to contain the outbreak and is willing to cooperate with it to help overcome difficulties as soon as possible.

As of Tuesday, South Korea had reported 8,320 confirmed infections and 81 deaths from the virus. However, it has seen a decline in the number of new cases, with the latest figures showing only a double-digit rise for three consecutive days.

The country said that the main message it wants to convey in containing the virus is "conduct as many tests as possible". There are 118 facilities in South Korea to carry out tests, with all of them reporting results to the KCDC.

Since the outbreak emerged in mid-January, the nation of 51 million has tested about 270,000 people, with some 15,000 tests being carried out daily.

Drive-through testing centers have been rolled out, where motorists are met by health workers dressed in hazmat suits. The safety procedures even include a vehicle's air conditioning system. Drivers are advised to hit the recirculation button if they are sick, to isolate pathogens in their cars and avoid infecting medical personnel carrying out the tests. 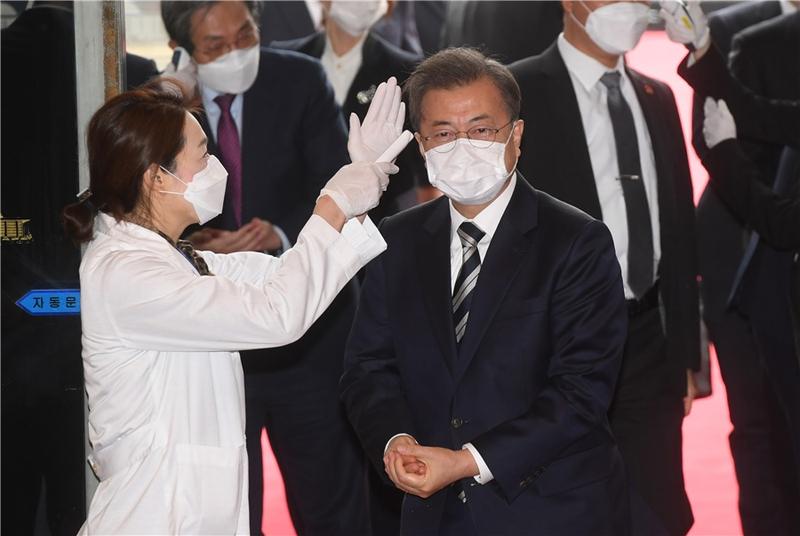 South Korean President Moon Jae-in has his temperature checked as he arrives at the National Assembly in Seoul on Feb 28. (YONHAP / AFP)

At a news conference last week, South Korean Health Minister Park Neung-hoo said it is very important to detect cases at an early stage. Once this highly contagious virus spreads, it does so extremely quickly and over very wide areas. "Thus, raising the testing capability is very important, because in this way, you can detect someone who's carrying the virus, then you can contain it," he said.

Park said the authorities have also arranged facilities for patients showing mild symptoms, adding that only about 10 percent of those with the virus had required hospitalization.

Dong Xiangrong, a researcher at the National Institute of International Strategy at the Chinese Academy of Social Sciences, said: "South Korea is well prepared. If there hadn't been any "special events", such as gatherings of the Shincheonji religious group, the country could have responded to the outbreak calmly and better."

South Korea's "patient zero" was discovered on Jan 19, when a Chinese woman who arrived at Incheon Airport in Seoul with fever symptoms was diagnosed with the virus. The next day, the country raised its alert level for the outbreak to "attention-needed".

Nearly one month after the first case was detected, the number of infections in the country remained very low, Dong said. "The situation did not become really serious until mid-February, starting with Patient 31."

Dong was referring to a 61-year-old South Korean woman, a devout follower of the Shincheonji group.

On Feb 6, after a traffic accident, the woman sought treatment at a clinic, during which she developed a fever. The doctor asked her to go to a hospital to test for the virus, but she initially refused. However, on Feb 18, the woman was confirmed as the 31st case of novel coronavirus pneumonia infection in South Korea.

Media reports said that from Feb 6 to 18, the woman had taken part in many rallies staged by the Shincheonji group, which bans face masks and whose members pray in close proximity. Its leader, Lee Manhee, who has been accused of deliberately withholding information about the group's membership, may face murder charges.

After the woman was diagnosed, the number of infections in South Korea began to rise rapidly, with the country being the most severely affected outside of China. 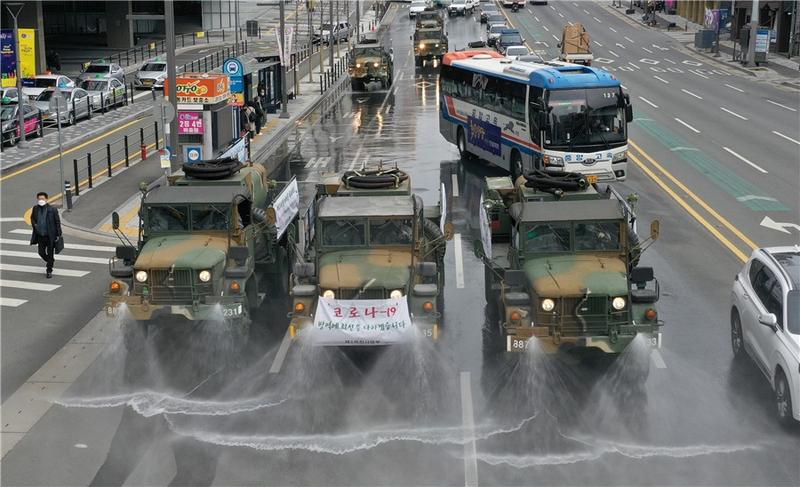 Military vehicles spray disinfectant in Daegu on Feb 29, as part of measures to contain the virus. (YONHAP / AFP)

The KCDC said in a statement that about 75 percent of all cases detected since the woman tested positive had been in the southeastern city of Daegu, where the Shinchonji group is located, and 90 percent of all cases in the country were directly or indirectly linked to the group.

Dong said that although South Korea established an early warning system for the virus and had invested heavily in testing, the outbreak among the religious group had caught the government off guard.

Stricter measures were enforced in Daegu, with President Moon declaring the hardest-hit area a "special disaster zone", the first time the country had taken such action for a region due to an infectious disease. As a result, the government can provide subsidies of up to 50 percent in restoration costs and exempt residents from taxes and utility payments.

Authorities also banned large gatherings, closed educational institutions and public areas－such as parks, sports facilities and daycare centers－and canceled all major sports events. Nearly all followers of the Shinchonji group, who number about 200,000, have been tested.

Lee Hyuk-min, a professor of laboratory medicine and clinical microbiology at Yonsei University College of Medicine in Seoul, said South Korea had learned many lessons the hard way. For example, it did not have sufficient resources to cope with previous epidemics, notably the outbreak in 2015 of Middle East respiratory syndrome, or MERS. At the time, the KCDC was the only institution authorized to carry out epidemiological testing.

"Testing capacity is not just about getting enough lab kits. It requires years of investment in complex health care infrastructure, including lab hardware and technicians to analyze samples, logistics for moving goods and providing services, and information technology to keep supplies and data moving. Any bottleneck or shortage of these elements can cost time and lead to more infections and deaths," Lee said. 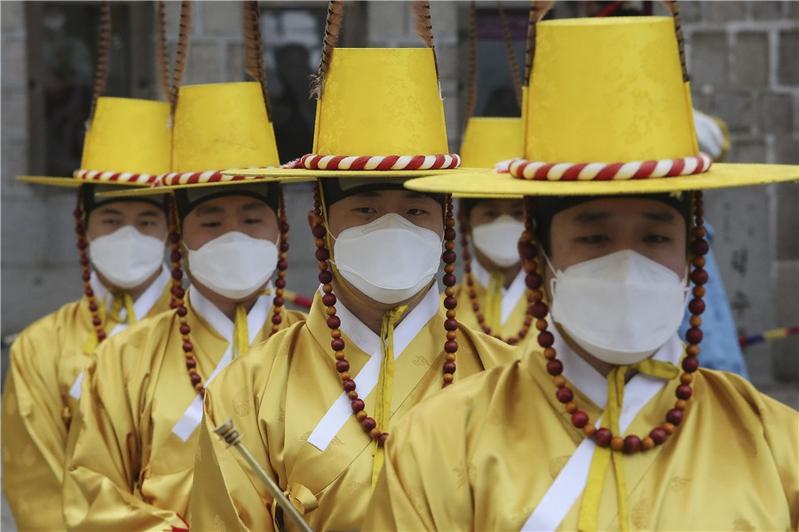 Imperial guards protect themselves against the virus during a ceremony at the Deoksu Palace in Seoul. (AHN YOUNG-JOON / AP)

He added that the problem is that "in South Korea, private institutions account for 90 percent of the medical system and 90 percent of our testing capacity," especially laboratories to analyze samples.

After collaborating voluntarily, the public and private sectors must now cooperate more efficiently, he said, and the KCDC should be reorganized to respond more effectively to epidemics, including setting up a branch to specifically supervise testing and diagnose infectious diseases.

"In order for South Korea to carry out all these tests, we have to get all these ducks in a row," he added.

On Monday, the World Health Organization called on all countries to step up their testing programs as the best way to slow the advance of the pandemic. It also urged companies to increase production of vital equipment to overcome acute shortages.

"We have a simple message to all countries－test, test, test," WHO Director-General Tedros Adhanom Ghebreyesus said at a news conference in Geneva, Switzerland. "All countries should be able to test all suspected cases. They cannot fight this pandemic blindfolded."

Without testing, cases cannot be isolated and the chain of infection will not be broken, he said.

Even countries with advanced health systems have struggled to cope with the outbreak, he said, adding that he was deeply concerned about the effects on low-income nations where people are facing malnutrition and other health problems

He added that the strategy to contain the disease－identifying people with infections and rapidly isolating them－is still the best approach, and it has had a positive effect in China, South Korea and Singapore.

South Korean Foreign Minister Kang Kyung-wha said close cooperation with China has been vital for her country's ability to respond promptly to the pandemic.

"We quickly approved the testing system after the Chinese authorities released the genetic sequence of the virus in mid-January. Our health authorities quickly confer with research institutions and share the results with domestic pharmaceutical companies who then produce the reagent and equipment needed for testing," Kang said. 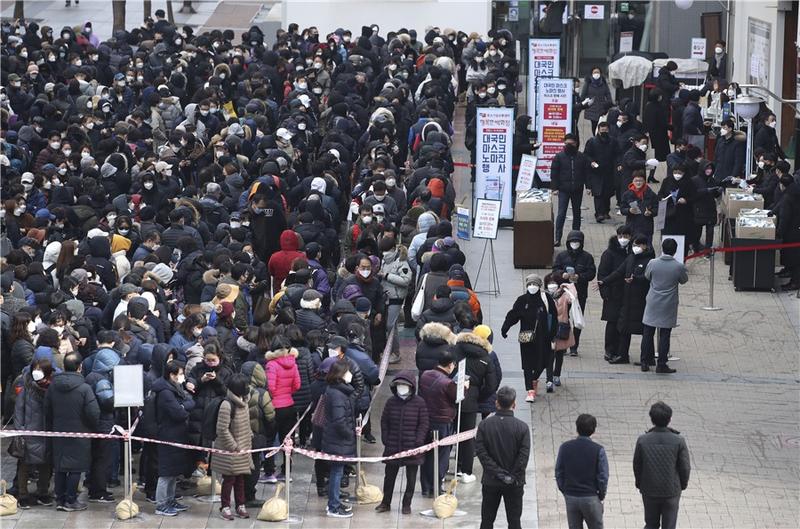 People line up outside a department store in Seoul to buy face masks on March 3. (HONG HAE-IN / YONHAP / AP)

She stressed the importance of sharing information, especially after the WHO declared the outbreak a pandemic. "As we are risking the spread of the virus now turning into a spread of fear, countries should work together not only to fight the virus but also rumors and discrimination," Kang added.

Wang Junsheng, an Asia Pacific studies expert at the Chinese Academy of Social Sciences, said that during the early stages of the outbreak, South Korea sent a large amount of medical equipment to China, including 2 million face masks, 1 million medical masks, 100,000 hazmat suits and 100,000 pairs of goggles.

According to Yonhap News Agency, many provincial-and municipal-level organizations in China have started to assist South Korea. On Feb 27, some 500,000 masks donated by the Shanghai municipal government were sent to Daegu and the Gyeongsangbuk-do area. On March 4, the authorities in Weihai, Shandong province, donated 200,000 masks to Incheon.

Wang said the two countries have a common interest in strengthening the sharing of viral research and epidemic prevention and control information.

"Many countries have overreacted to Chinese and South Korean citizens due to the outbreak, which not only affects the legitimate rights and interests of people from the two countries, but also the two nations' global image. The valuable experiences of China and South Korea in fighting the outbreak should be shared with the world, and the two neighbors will serve as a model for other countries," Wang added.

At a news conference on March 13, Chinese Foreign Ministry spokesman Geng Shuang said China and South Korea had set up a joint prevention and control mechanism to cope with the virus and had held their first video conference on the outbreak on Friday.

He said the aim of the mechanism is to implement the important consensus reached between the two countries' leaders to strengthen communication and coordination to win the battle against the virus as soon as possible.

He added that during the conference, both countries spoke positively of their epidemic control efforts in the early stages, as well as bilateral exchanges and cooperation between departments.