Mandatory quarantine for all arrivals in HK starting March 19 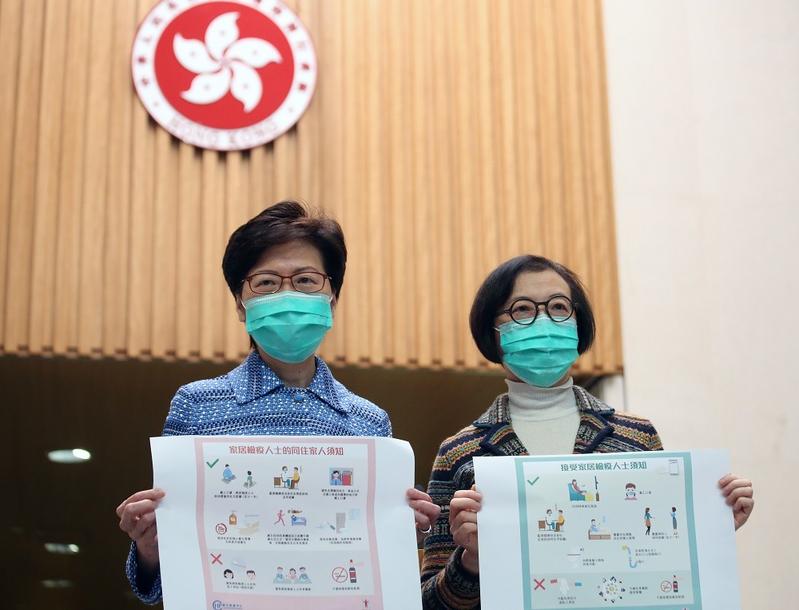 Speaking to reporters ahead of the weekly Executive Council meeting, Lam urged all HK residents to avoid all non-essential travel.

The Hong Kong government issued a Red Outbound Travel Alert on all overseas countries and territories on Tuesday evening. In a three-tier alert system, red is the second-most severe and warns of a “significant threat” at the locations cited.

"In many countries the number of confirmed cases can be described as explosive," Lam said. "If we don't adopt some strict measures ... I'm afraid all precaution efforts done in the past two months would be wasted. It will affect the public health of Hong Kong.”

Lam made it clear that all HK residents among arrivals entering Hong Kong will be subject to mandatory quarantine or medical observation from March 19. Also, that Red Outbound Travel Alert will not apply to Macao, the Chinese mainland and Taiwan.

Lam said while mandatory quarantine applied to all mainland arrivals, arrivals from Macao and Taiwan will be exempted. The lower-risk cases will be asked to stay under home quarantine or be placed under surveillance, which can include electronic wristbands with movement trackers, irregular landline phone calls and other means.

Lam also said all schools in the city were unlikely to resume by April 20, adding that if schools do start on that date, they would re-open in phases

The city’s leader said that the two new arrangements were made to cope with the worldwide spread of COVID-19 and a rising number of imported cases of infection recorded in the city.

Lam called on HK residents to be prepared for a protracted battle against the disease.

In response to a proposal to ban the entry of all non-residents, Lam said it would be a “drastic step”. She pointed out that all confirmed cases with travel history during the incubation period up to Tuesday were Hong Kong residents.

“While we are still in an epidemic situation, we have to allow the city to continue, the business to resume, otherwise we may have more problems on the economic front,” she said.

Hong Kong's flag carrier Cathay Pacific will add flights and upgrade the size of aircraft this week to pick up Hong Kong residents in the UK and the US, said Lam.

In addition, the Hong Kong government will provide 67,000 free face masks to passengers who board the return flights in the UK and the US, given the difficulties in obtaining face masks overseas.

Lam also said all schools in the city were unlikely to resume by April 20, after weeks of closures. If schools do start on that date, they would re-open in phases, she said, without elaborating.

Four of 157 confirmed coronavirus patients in Hong Kong have died. Since March 2, Hong Kong has recorded 58 new cases of infection, an increase of 58 percent — of which 40 cases were either imported or constituted infections in people who had come in close contact with those who contracted the disease abroad.