By Zhang Yangfei in Beijing and Wu Yong in Wuhan 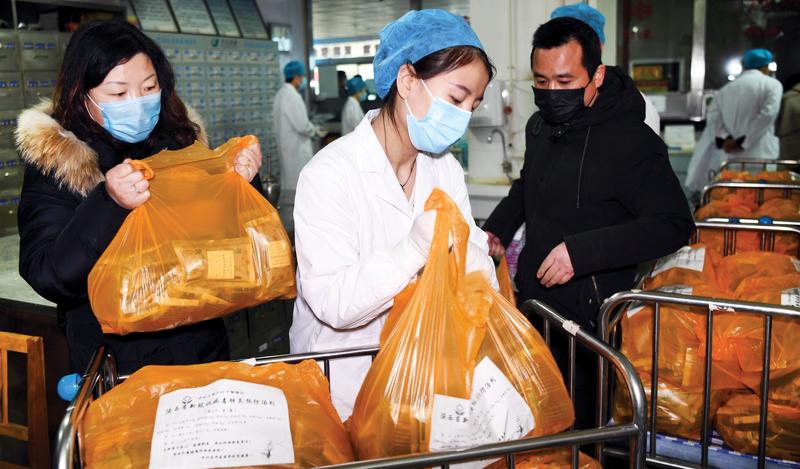 On March 1, 16 patients with novel coronavirus pneumonia were discharged from the temporary Leishenshan Hospital in Wuhan, Hubei province, the epicenter of the outbreak. Six of them had been treated with traditional Chinese medicine, or TCM.

In addition to being prescribed herbal formulas, they were given acupuncture, acupressure and foot massages after being hospitalized.

The six were the most recent group to recover from the viral infection after receiving TCM. On Feb 26, a total of 23 patients were discharged from Jiangxia Hospital, a mobile facility in Wuhan operated by TCM professionals.

In all, 60,107 patients with the virus had been treated with TCM nationwide as of Feb 17, accounting for 85.2 percent of the total number of infections, according to the State Administration of Traditional Chinese Medicine.

Although no specific cure has yet been found for the virus, experts said there has been a high recovery rate, either by using TCM on its own or combined with Western medicine. For example, health authorities in Beijing announced on Feb 24 that 92 percent of patients in Beijing treated with TCM had shown improvement.

Since the epidemic emerged in January, the central government has placed great emphasis on using a combination of TCM and Western medicine.

More than 4,900 medical workers from 600 TCM hospitals across the country and five national medical teams comprising 757 TCM specialists from the China Academy of Chinese Medical Sciences and other institutions are treating the outbreak in Hubei. 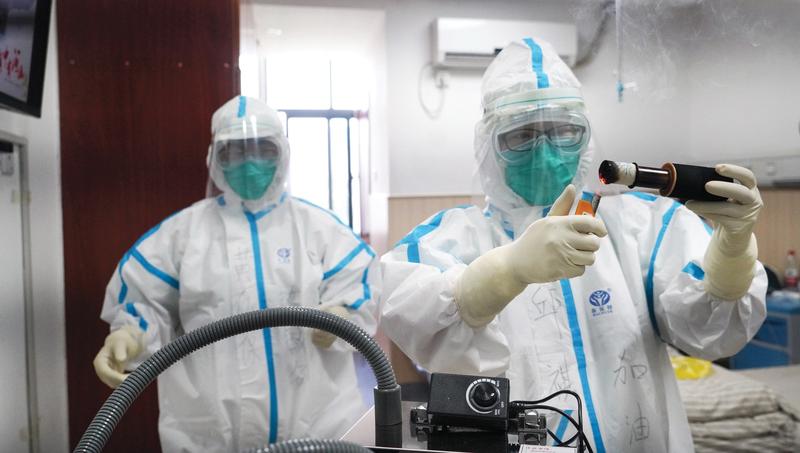 In 2003, TCM played an important role in treating patients with severe acute respiratory syndrome, or SARS, with official statistics showing that it was used in 3,104 of the 5,326 confirmed cases, or 58.3 percent of the total on the Chinese mainland.

However, with the emergence of novel coronavirus pneumonia, the TCM community has taken stronger action.

The next day, respiratory expert Zhong Nanshan confirmed that the virus could be transmitted from person to person.

On Jan 21, the first group of TCM experts arrived in Wuhan, including Liu Qingquan, head of the Beijing Traditional Chinese Medicine Hospital affiliated to Capital Medical University, who helped in the frontline fight against SARS in 2003. 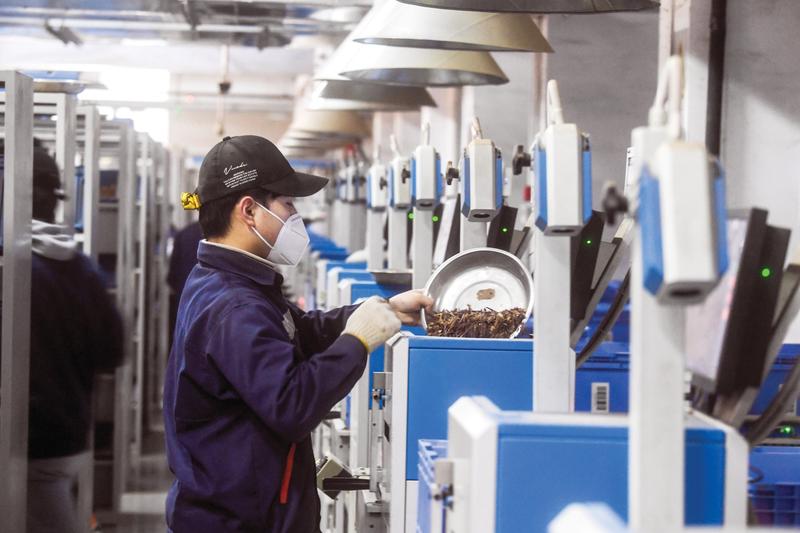 The experts checked some 70 patients’ pulses and tongues, and they asked for those with symptoms to define their condition, before concluding that novel coronavirus pneumonia was caused by “damp evil”, a reference to a yin-yang imbalance in the body.

The first group of eight patients treated with a combination of TCM and Western medicine was discharged from Jinyintan Hospital in Wuhan on Feb 3.

The central government held a group meeting 10 days later, which called for the integration of TCM and Western medicine to be strengthened to promote greater involvement of the former in the entire diagnosis and treatment process. It also urged that clinical trials of drugs be accelerated and that drugs be applied promptly to improve the recovery rate and to reduce deaths.

On Feb 14, 50 patients were admitted to a mobile hospital in Wuhan’s Jiangxia district, the first such facility to start operating in the city.

“It is also the first hospital at which the medical staff are all from hospitals using TCM,” Liu said.

The facility, which has been named Dahuashan, was transformed from a local outdoor sports center.

Headed by Zhang Boli, from the Chinese Academy of Engineering, 209 experts from top hospitals in Tianjin and Jiangsu, Henan, Hunan and Shaanxi provinces are working at the makeshift hospital. Liu and Wang Qinghua, the Party chief of Jiangxia district, are its executive directors.

“We want to use the characteristics and advantages of Chinese medicine to fully carry out some treatment and also integrate some modernized Western treatments. The priority is always to cure patients,” Liu said.

While no special medicines and vaccines have been developed to treat the virus at present, Liu said TCM can prevent a patient’s condition deteriorating, which is vital in ultimately winning the battle.

Zhang Boli said that in 2003, when he joined the fight against SARS, two TCM treatment areas were set up in Tianjin, which both achieved good results. “This time, we are here to replicate the experience of Tianjin and give full play to the role of Chinese medicine in fighting the epidemic,” he said.

“My inner clothing was completely soaked in sweat after I carried out checks at the hospital, but I felt very happy, as it meant the indoor temperature was more than 25 C, which is highly beneficial for patients’ recovery,” he added.

TCM experts believe that humidity and cold can cause the virus to spread, so keeping warm is key to controlling the disease.

“The key to defeating the virus is still the patient. The principle of TCM treatment is to mobilize the patient’s immunity and resistance through a variety of methods, not to eliminate the virus,” he added. 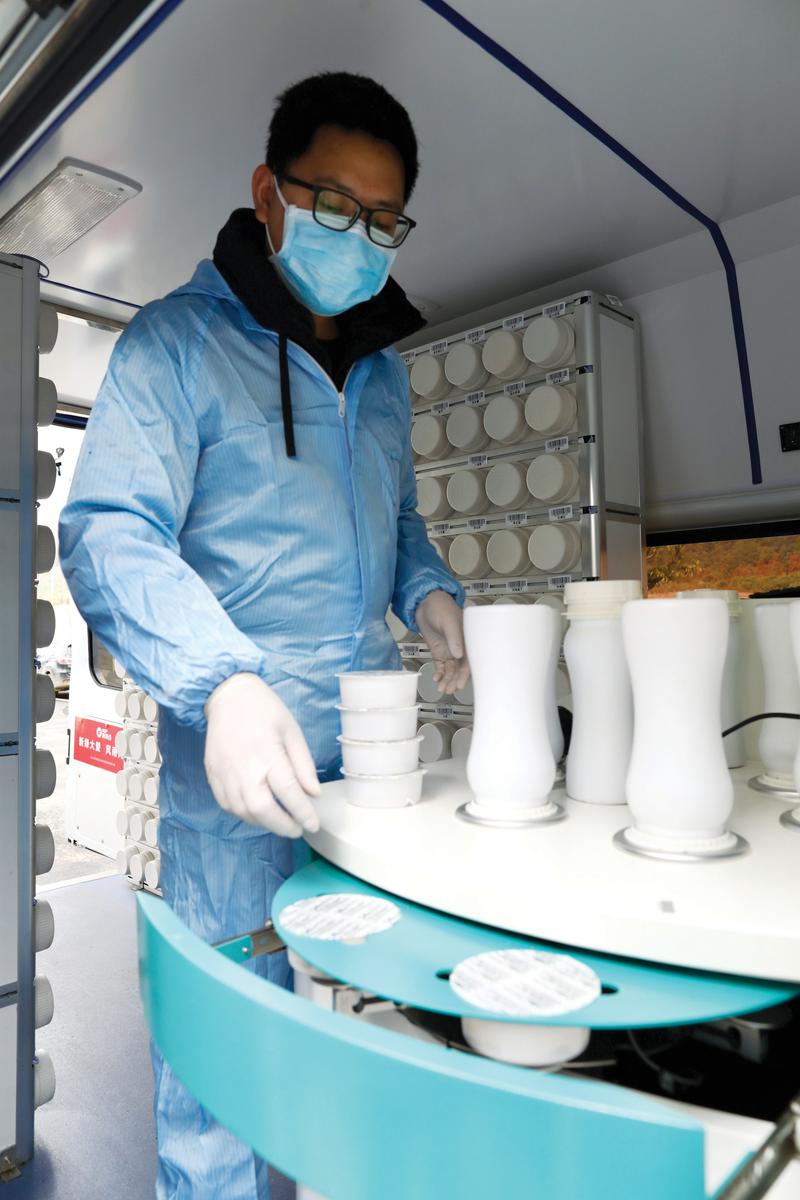 A hospital worker sorts out a cart for traditional Chinese medicine at a makeshift cabin hospital in Wuhan on Feb 14. (ZHU XINGXIN / CHINA DAILY)

More ways than one

The mobile hospital is also going to provide other treatment methods, such as tai chi and acupuncture, to improve patients’ immunity.

“When the patients recover a little bit, the medical staff will start taking them to tai chi,” Liu said, adding that performing this twice a day is effective in improving respiratory and cardiopulmonary functions.

Although the central government has constantly improved plans to tackle the virus, the rising number of confirmed cases caused people to worry and also made them more susceptible to accepting a range of unproven remedies.

In Western medicine, several clinical trials are usually needed to test a drug’s safety and efficacy before it can be approved for sale. Such trials involve comparative experiments involving a treatment group and a control group, with the latter only receiving a placebo — a harmless pill, medicine or procedure prescribed more for the psychological benefit to the patient rather than any physiological effect.

However, in TCM, a different system is used.

Western medicine uses a more targeted and antagonistic method. “For example, if you have an inflammation, you will use an anti-inflammatory drug. If you contract a virus, then the body will produce certain antibodies,” he said, adding that the two medical systems are more complementary than contradictory.

Yang said TCM has been effective in easing pain, improving patients’ condition and curing more of them, but the most effective method is its combined use with Western medicine, especially in treating those who are critically ill.

“Such patients’ internal organs have lost function, making the body unbalanced, so they need the support of modern medicine, such as intubation or the maintenance of a safe blood pressure level in patients suffering from shock. Modern medicine is necessary and indispensable for acute diseases,” he said.

Zhang Zhongde said patients who are critically ill can have problems breathing and experience multiple organ failure and an overproduction of immune cells.

“TCM doctors have been thinking about better ways to solve these problems,” he said.

Liu said treating novel coronavirus pneumonia is like “fighting a war”, with the goal being not to eliminate the virus but to achieve health without causing too much damage to the body.

“This is like eating bread. Whether it’s steamed bread or baked bread, it’s good bread if it can satisfy the appetite. There is no difference between good or bad in the bread,” he said.