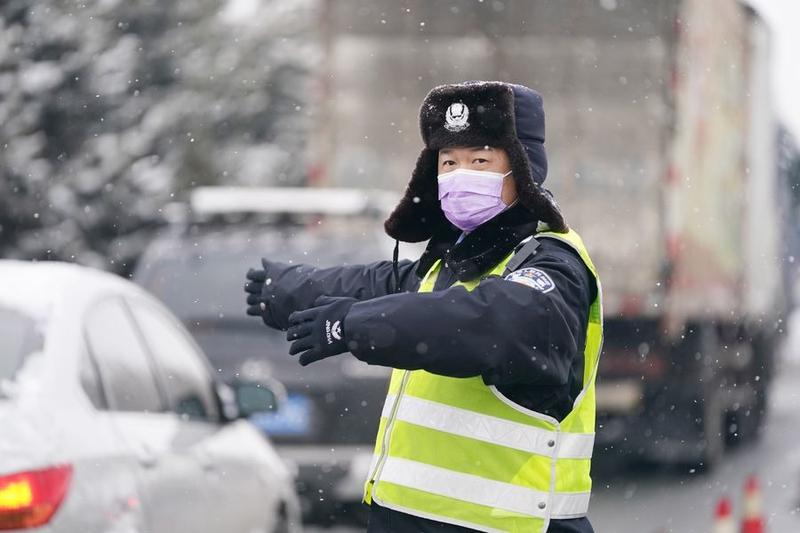 In this Feb 29, 2020 photo, a police officer guides the traffic in the snow at a checking point in Pingfang District of Harbin City, northeast China's Heilongjiang province. (WANG JIANWEI / XINHUA)

BEIJING – China has restored normal traffic order in most areas, as 1,117 of the 1,119 closed expressway entrances and exits across the country have re-opened as of Saturday.

Total 549 blocked national, provincial, county and township roads have re-opened, and 11,198 of the 12,028 highway health and quarantine stations have been removed.

During a national teleconference on Feb 21, officials were asked to restore traffic and transportation order with differentiated control in different regions to open up traffic congestion points.

The number of migrant workers returning to work has reached 78 million, accounting for about 60% of the migrant workers who had returned home for the Spring Festival, data show

In areas with low risk of epidemic situation, road traffic restrictions should be completely lifted and normal traffic order should be restored, according to the teleconference.

Monitoring information from the Highway Monitoring and Response Center of the Ministry of Transport (MOT) shows the national road network is basically running normally.

The Communist Party of China Central Committee and the State Council have made it clear that transportation restrictions on freight vehicles and vessels should be lifted in areas with no serious epidemic situation to ensure that raw materials can be sent in and products can be sent out.

In a notice on Feb 15, the Ministry of Transport made it clear that from Feb 17 till the end of the epidemic prevention and control, all vehicles passing through toll roads will be exempted from tolls.

The authorities have been facilitating "point-to-point" transportation service to bring migrant workers back to areas and enterprises with concentrated employment, to ensure the safe and orderly return to work of migrant workers.

A total of 27 provinces across the country, including Sichuan, Zhejiang, Shandong and Fujian, have implemented "point-to-point" one-stop direct charter service, said Cai Tuanjie, an official with the ministry.

The number of migrant workers returning to work has reached 78 million, accounting for about 60 percent of the migrant workers who had returned home for the Spring Festival, official data showed.

At Xinyi east toll station, located at the junction of Jiangsu province and Shandong province, a 50-seat bus with the red sign of "China Railway Construction Engineering Group employees returning to work transport vehicle" was driving out of the station.

The driver, surnamed Gao, said he had been working for days to pick up migrant workers from Tancheng in Shandong back to Yancheng in Jiangsu to help the company's construction projects resume work as soon as possible.