Restaurants refocus their business models to take meals to people, including hospital staff 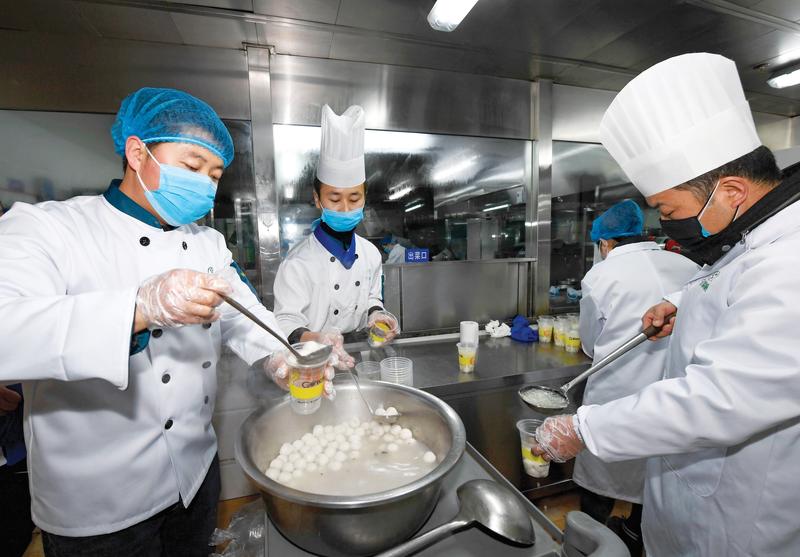 Chefs in a restaurant in Yinchuan, Ningxia Hui autonomous region, cook yuanxiao, a special food for Lantern Festival, for workers at the front line against the outbreak. (PHOTO / XINHUA)

Nearly all of Beijing’s restaurants closed for a month when the SARS outbreak hit 17 years ago. Liu Jingjing, who owns a dozen stores and restaurants, remembers clearly how she entertained her employees by playing games and getting them to read to kill the time and take their minds off the situation.

She tried to start a delivery service then. But the SARS threat disappeared, and things started to return to normal before she got it on track.

After the one-month shutdown, she had to take out a loan at 10 percent interest per month to pay her employees and vendors on time.

A year later, upon noticing the demand for healthy food after the epidemic, she decided to open a new restaurant chain, Jiaheyipin, focused on serving nutritious porridge. Liu also launched a delivery service in 2008.

When the novel coronavirus outbreak occurred in China during this Spring Festival, businesses were shut again, and the catering industry became one of the hardest hit.

On Feb 6, the Beijing Administration for Market Regulation launched a guide for catering companies during the epidemic.

The guide also asks restaurants to not accept bookings of more than three people.

Unlike during SARS, most eateries have chosen to stay open, including Liu’s chain, even though they receive far fewer walk-ins. They are focusing on delivery services. 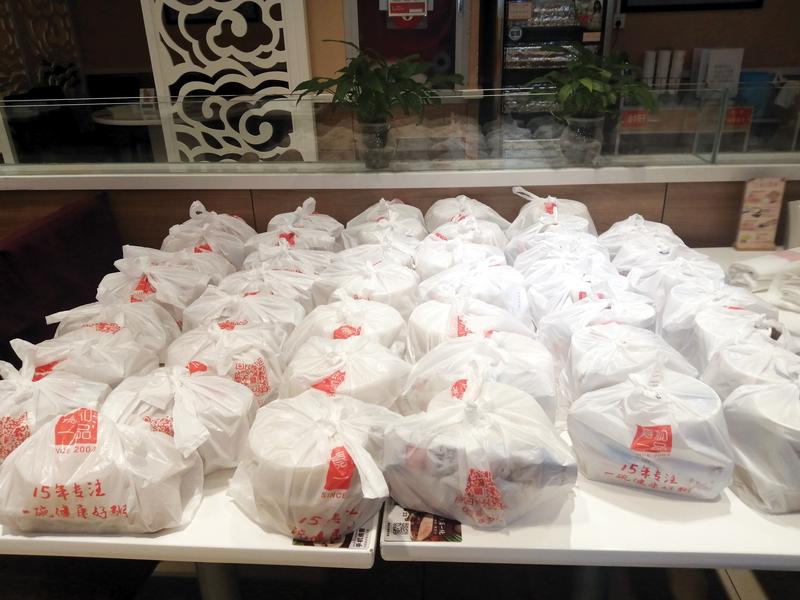 Box meals are ready for delivery at Jiaheyipin restaurant in Beijing. (PHOTO PROVIDED TO CHINA DAILY)

Jiaheyipin closed from Jan 24 to 27 for Spring Festival. The epidemic did not stop Liu from opening on Jan 28. She put greater emphasis on delivery service.

About a third of her 1,500 employees are at work, she said. The others are staying in their hometowns, waiting for further instructions. But she has promised to pay their salaries on time.

“Some employees told me they could receive their paychecks in stages, so our company won’t face serious cash-flow difficulties, which really touched me,” Liu said. “I always say that our workforce is a warm family, like brothers and sisters.”

Liu said all of her restaurants’ walk-in diners need to order through a WeChat program so each order’s information, such as diners’ WeChat ID, can be recorded.

“The food we serve is balanced in nutrition, which helps customers maintain good health — it’s key to fighting the virus,” Liu said.

“We need to ensure our employees’ health first. And by providing our service as usual, we ensure people who are self-quarantined at home feel less anxiety or fear about the situation.”

Many restaurants had prepared special menus for family-reunion dinners during Spring Festival, and pre-orders were quite popular. Bookings at some Michelin-starred restaurants in Beijing were made weeks before the holiday.

But most were canceled as the novel coronavirus outbreak spread in mid-January, leaving the restaurants with plentiful food stocks.

According to Wang Gang, founder of Meizhou Dongpo Catering Group, from Jan 21 to 30, the group received 11,144 cancellations in its more than 100 restaurants around China and lost about 17 million yuan (US$2.44 million).

This, added to the paycheck outlay of around 50 million yuan per month and monthly rents totaling 11 million yuan, means the novel coronavirus has cost the company more than 70 million yuan. 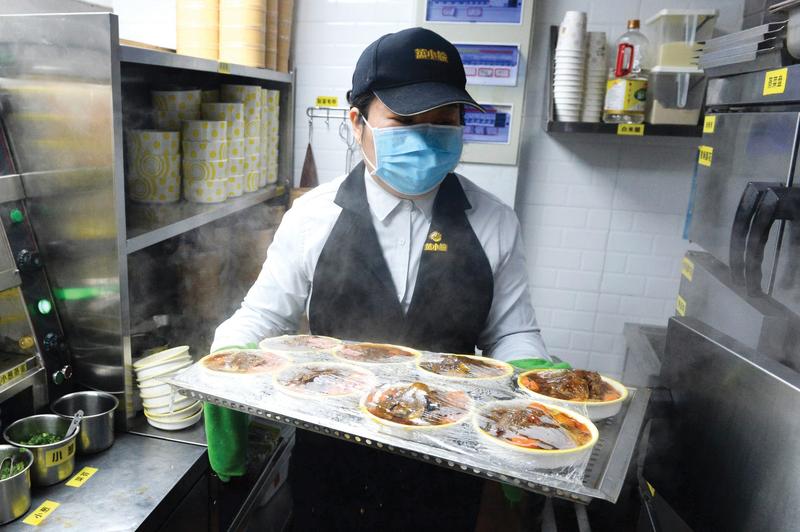 The group’s business has declined 80 to 90 percent, and its income comes mostly from takeout, Wang said.

“Our cash flow can last three months to half a year. The influence of the novel coronavirus’ outbreak on our restaurants may last six months — even a year — so we need a long-term plan.”

Jia Guolong, CEO of Xibei Catering Group, a restaurant chain focused on northwestern Chinese cuisine, wrote a letter to all 21,870 employees on Feb 6, saying that even though 80 percent of their more than 400 branches had to close due to the outbreak, the group is working on delivery services. About 200 branches are offering takeout.

Most food deliveries include a card that records the names of the people who cooked and delivered each dish, and their body temperatures.

Western-cuisine restaurants in Beijing, that had previously focused on fine dining and serving experiences, are also starting delivery. Hulu by TRB in the city’s Sanlitun area launched lunch and dinner menus for delivery in early February. The entire process from cooking to delivery is done by its own staff.

Many restaurants have also started services selling raw ingredients, including vegetables, meat and eggs. They have plenty in store because of the holiday season. And people prefer to stay at home and avoid local markets.

Because many of the delivery people have not returned to Beijing due to the extended holidays, online fresh-produce-delivery platforms, such as Hemaxiansheng and Jingdongdaojia, are shorthanded.

Orders were usually delivered within an hour before the outbreak. But users have to wait longer now. 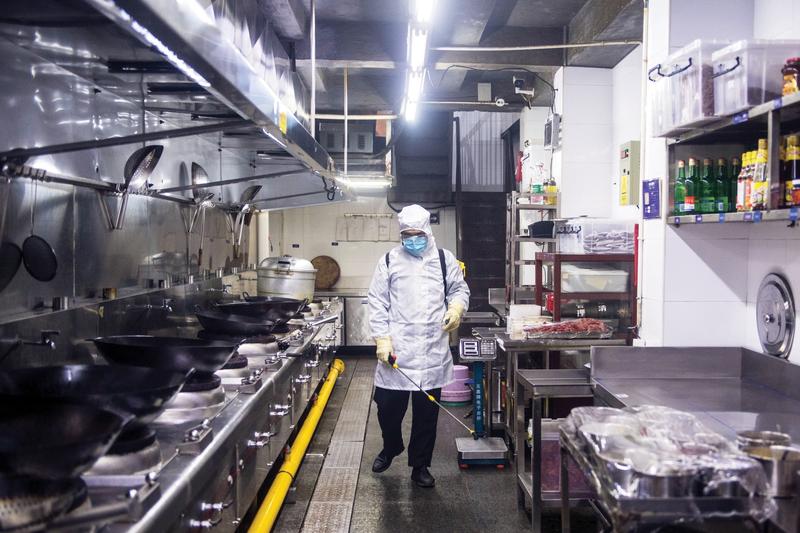 Jia said about 1,000 of his employees at Xibei are temporarily working for Hemaxiansheng.

Meizhou Dongpo has not only started to sell ingredients but also offers semi-finished products.

“We have prepared thousands of metric tons of ingredients, and the clients can buy raw ingredients without going out,” Wang said.

Meizhou Dongpo has five branches in Hubei province — two in Wuhan and three in Huanggang.

“We have around 210 employees working in branches in Hubei. And we are launching special canteens to make meals for medical workers, journalists and police officers in Wuhan and Huanggang,” Wang said.

The canteen can prepare hundreds of free box meals for local hospitals and Huoshenshan Hospital every day.

It is not the first time that Meizhou Dongpo has set up a special canteen. In 2013, after the earthquake in Ya’an, Sichuan province, the catering group established one to serve local people.

Jiaheyipin started to send free meals to medical workers in Beijing on Feb 2. It has delivered food to Luhe Hospital, Shunyi Hospital and Changping Hospital, which are all designated for novel coronavirus pneumonia care.

“We’re contacting more hospitals in Beijing to provide our food to,” Liu said.

Jiaheyipin has created for medical workers four set meals with balanced nutrition and flavor, including minced-pork congee with preserved eggs and steamed buns stuffed with braised pork and eggs.