Pressure mounts for HK SMEs to be given a lifeline 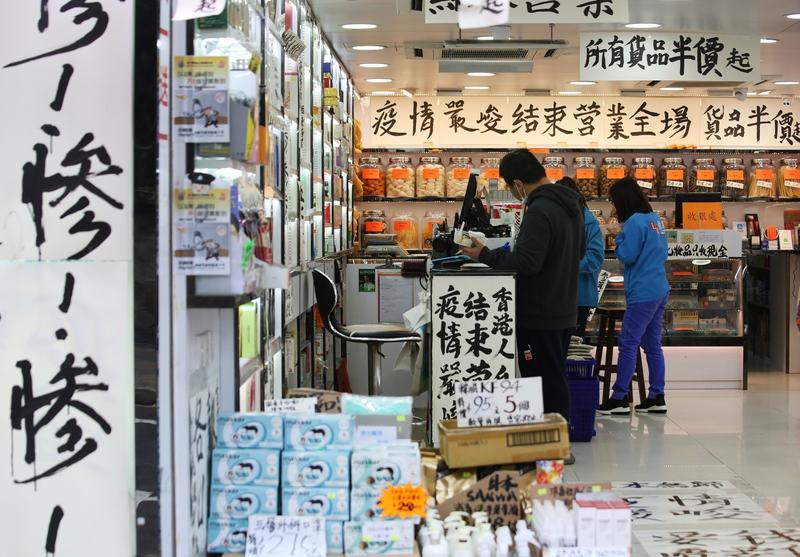 A pharmacy in Tsim Sha Tsui, Hong Kong, puts up banners saying that the store will end its business soon due to the novel coronavirus epidemic, and all of its goods are on sale. (PARKER ZHENG / CHINA DAILY)

The novel coronavirus epidemic has highlighted the cash-flow problems of small and medium-sized enterprises in Hong Kong’s key sectors like import and export, transportation, retail, catering and tourism, with the local economy already strained by the China-United States trade frictions and the protracted social unrest.

“We’ve trimmed Hong Kong’s GDP estimate for 2020 by 30 basis points to a negative 0.8 percent, with an even deeper economic contraction likely in the first quarter of this year at a negative 4.7 percent,” said Anthony Chan, managing director and chief Asia investment strategist of Swiss-based private bank Union Bancaire Privee.

The Chinese Manufacturers’ Association of Hong Kong predicts the city’s economic growth will slide 1.5 percent this year. This would mark the SAR’s two consecutive years of economic contraction since 1997.

Hong Kong’s economic growth dived 1.2 percent in 2019 — the first annual contraction in a decade — according to the Census and Statistics Department.

The epidemic is likely to strain the economy even more this year, so we urge the government to consider immediate short-term measures in the upcoming budget to counter the negative economic impact of the outbreak

Credit trade insurer Euler Hermes said the potential losses of exports of goods and services to the mainland, where a biting halt in business is in force, could reach $26 billion per week. For this year, global trade growth is forecast to dip to 1.3 percent, with the economies of Hong Kong, the US, Japan, South Korea and Germany bearing the brunt of the losses.

In its latest report, Moody’s Investors Service said the coronavirus outbreak, now in its eighth week, has put pressure on the growth of Asia-Pacific economies, with the impact felt primarily by trade and tourism, and certain sectors experiencing supply-chain disruptions.

The US-based credit rating agency expects Hong Kong and Macao to take the biggest hit, given their close economic links with the Chinese mainland.

“Since the mainland authorities have imposed strict regulations on applications for the resumption of work, manufacturers may fail to deliver the orders on time due to the late resumption of operations and this, in return, will lead to liquidity problems,” said Daniel Yip, chairman of the Federation of Hong Kong Industries.

“We would like the government to come up with further relief measures, such as a loan guarantee scheme to support local enterprises’ short-term capital chain. Feasible steps include cutting profits tax and subsidizing the Mandatory Provident Fund contributions of both employers and employees,” he said.

SMEs made up about 98 percent of Hong Kong’s total enterprises and about 45 percent of the city’s employers in the private sector last year. The segment represented 56.4 percent of the total value added to the import/export trade and wholesale industries, surpassing that of large corporations, which contributed 43.6 percent in 2018, according to the Bauhinia Foundation Research Centre.

Besides injecting short-term liquidity, boosting business receipts is another financial lifeline for SMEs.

The accounting services firm proposed a slew of immediate taxation measures to aid local businesses, such as rolling back tax losses by allowing current year tax losses as a one-off, set-off of the previous year’s taxable profits and refunding excessive taxes already paid, providing one-off subsidies for companies that have suffered a certain amount of tax losses, deferring tax filings and payments, and partially waiving provisional taxes for the 2020-21 fiscal year.

CPA Australia has proposed waiving business registration fees for all SMEs, as well as those in selected sectors, such as retail, tourism and hospitality, and the food-and-beverage industry, waiving travel agent license fees, hotel/guesthouse license fees, and license fees for restaurants. It also suggested introducing an additional tax deduction for salaries paid by employers, starting from Feb 1 to until the epidemic has subsided.

The accounting industry body also wants the SAR government to fund a business advice voucher system of HK$6,000 for each company that can be redeemed by selected businesses, such as the retail, tourism and hospitality, and food-and-beverage sectors, with professional business advice, to help SMEs decide on how best to respond to the impact of the coronavirus epidemic.

“The epidemic is likely to strain the economy even more this year, so we urge the government to consider immediate short-term measures in the upcoming budget to counter the negative economic impact of the outbreak,” said CPA Australia’s Greater China Divisional President 2020 Anthony Lau.