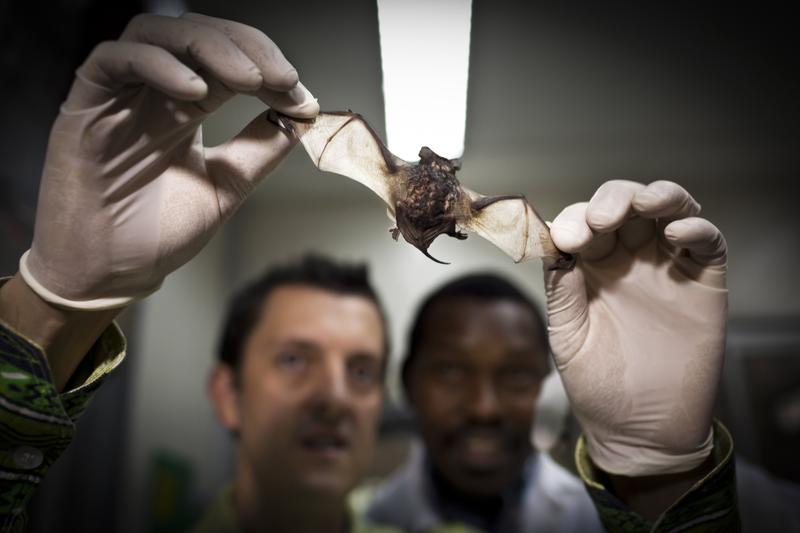 Every Saturday morning, a dozen or so villagers from a province about 96 km west of Bangkok creep into a bat-festooned cave to scrape up the precious fecal deposits of its flourishing inhabitants.

In three hours, they can amass as many as 500 buckets of bat dung. The guano is packaged and sold at an adjacent temple as fertilizer, reaping more than 75,000 baht (US$2,400). Just 1 kilogram of the nutrient-rich material can fetch as much as the daily minimum wage.

Elsewhere in Asia and Micronesia, meat from bats is sometimes sold in markets or cooked at home after being caught in the wild. Although consumption is rare and limited to certain communities, it’s considered a local delicacy in the Pacific island-nation of Palau, and areas of Indonesia, where meat from other mammals is scarce.

Anything to do with bats, in theory, can expose yourself to potential viral transmission because we know bats carry so many viruses

With growing awareness of bat-borne viruses -- from Nipah to coronaviruses linked to severe acute respiratory syndrome and the new pneumonia-causing COVID-19 disease that’s killed more than 2,000 people in China -- human contact with the ancient flying mammal and their excreta is drawing closer scrutiny.

“Anything to do with bats, in theory, can expose yourself to potential viral transmission because we know bats carry so many viruses,” said Linfa Wang, who heads the emerging infectious disease program at Duke-National University of Singapore Medical School.

Bats contain the highest proportion of mammalian viruses that are likely to infect humans, according to research published in 2017 by disease ecologist Peter Daszak in the scientific journal Nature.

Still, very few bat viruses are ready to transmit directly to humans, said Wang, who has been studying bat origins of human viruses for decades and works with a group of researchers sometimes dubbed ‘The Bat Pack.’

“I always say that if they could do that, then the human population would have been wiped out a long time ago because bats have been in existence for 80-to-100 million years -- much older than humans,” he said.

While still relatively low risk, the possibility that a virus might cross the species barrier and cause disease in humans is enough to require all of Wang’s lab and field researchers involved in bat sampling to take special precautions, including immunization against rabies -- the only vaccine available for a bat-borne virus -- and to wear personal protective gear, he said.

Danger doesn’t stop with bats. Other mammals, such as civets and camels, have been found to act as intermediate hosts that can pass coronaviruses to humans. Undercooked meat and offal, milk, blood, mucus, saliva and urine of virus-carrying mammals can potentially contain pathogens.

“Viruses evolve all the time -- there’s no way to know when it will mutate and become dangerous to humans,” said Supaporn Watcharaprueksadee, deputy chief at the Center for Emerging Infectious Disease of Thailand, who has studied bats for two decades. “The best prevention is to avoid the risk and reduce all risky behaviors,” she said.

At the Khao Chong Phran bat cave in the Thai province of Ratchaburi, where the bat dung is mined, there are an estimated of 3 million wrinkle-lipped free-tailed bats, an insect-eating species that produces high-nitrogen guano, essential for boosting plant growth.

Guano collectors usually enter the cave with long sleeved shirts and long pants, with a T-shirt wrapped around their head as makeshift cover -- in contrast to how disease ecologists investigate caves in a full-body suit with masks and gloves. Although dry guano has low risk of infection, miners or cave visitors can potentially be exposed to viruses through the fresh saliva and urine of bats.

It’s not a concern foremost in the minds of the cave’s guano collectors, even weeks after Thailand reported the first of its 35 COVID-19 cases.

“We’ve done this for a long time, for many generations,” said Singha Sittikul, who manages the business and fields orders. It’s a small operation trading guano locally, but such fertilizer is also sold by companies and via online commerce platforms, such as Amazon.com Inc and Alibaba Group Holding Ltd. “We carry on as usual.”

Bats are highly valued in Ratchaburi, where they not only produce a potent fertilizer, but also play a role in pollination and pest-control by feeding on insects that ravage rice and other crops. Their cave has been declared an animal sanctuary. Killing or eating them is prohibited.

In other places, bat consumption is more common. On the Indonesian island of Sulawesi, for example, fruit-eating bats are sold by market vendors and their meat is used in a soup-based dish with vegetables, chili paste and coconut milk. In Palau, a whole bat is served in a soup of ginger, coconut milk and spices -- a dish that gained notoriety on social media during the early weeks of COCID-19.

In southern Vietnam, a local newspaper reported Friday there were vendors serving bat porridge and bat blood cocktails, which they believe have aphrodisiac properties.

The trade and smuggling of wild mammals, including ones that may act as intermediaries of bat-borne viruses, poses a risk. Carcasses and parts of pangolins, lions, rhinos and elephants are routinely being trafficked through Southeast Asia.

Bat expert Supaporn is expanding her research to look at pangolins as well as horseshoe bats, which may have played a role in the emergence of the novel coronavirus that causes COVID-19, she said.

Closing markets and refraining from consumption of the animals is the only sure way to prevent the spread and recurrence of outbreaks, it said.

“There are so many bat-borne diseases that we have yet to discover, and they can be dangerous,” said Tawee Chotpitayasunondh, a senior adviser to the Thai Ministry of Public Health. “Now is the time to discourage eating and trading them.”