An outsider's life in a lockdown city 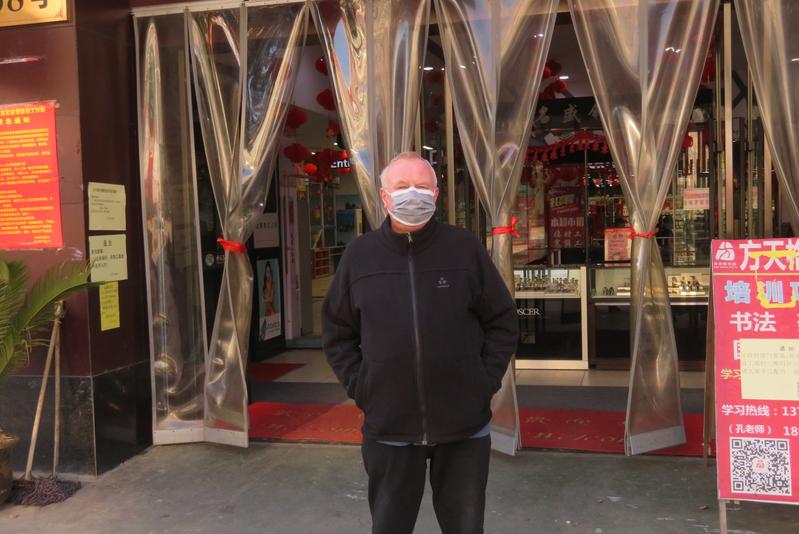 Peter Bentley poses for a photo before a supermarket in Wenzhou, Zhejiang Province, where he has been stranded since early February due to the outbreak of coronavirus. (PHOTO PROVIDED BY PETER BENTLEY)

As the novel coronavirus pneumonia epidemic rages across the Chinese mainland, a Hong Kong permanent resident remains stranded in a city of Zhejiang province — one of the nation’s hardest-hit areas. He finds the “super strict” measures imposed to contain the outbreak painful, but necessary.

Yueqing — a county-level city near the industrial port of Wenzhou — has been “locked down” since early this month. All major roads have been blocked off to curb the flow of people as part of an effort to contain the novel coronavirus epidemic. Guards are patrolling key entrances and exits. The streets are deserted and almost all shops have pulled down their shutters, creating an eerie silence.

From what I’ve read, what I’ve heard and what I’ve seen myself, I’m hopeful that the Chinese government can deal with it

Peter Bentley, a Hong Kong resident stranded in Zhengjiang due to the epidemic

This is what Peter Bentley has seen since he found himself stuck in the city for the past few weeks. It’s like a once-in-a-lifetime experience for the Briton, who has traveled extensively on the mainland on business, even during the SARS outbreak 17 years ago.

To contain the epidemic, which has killed over 1,800 people and infected more than 72,000 on the mainland as of Tuesday, the authorities in Yueqing have suspended all outbound and inbound traffic since Feb 4, with all highways linking other cities and major thoroughfares in the city sealed off. Two other regions of Wenzhou have also taken similar measures.

As of Feb 3, Yueqing had recorded 108 confirmed cases of the coronavirus, about one-third of them in Wenzhou, which ranks second among cities outside Hubei province — the epicenter of the outbreak — with the highest number of patients diagnosed with the disease after Chongqing municipality. 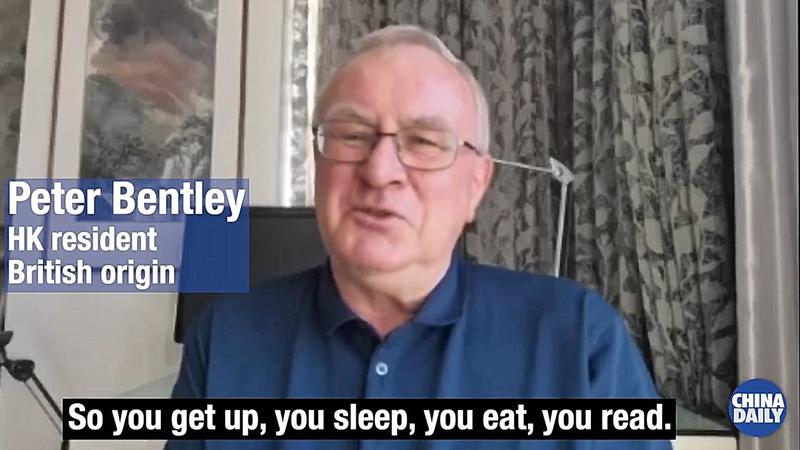 It wasn’t what Bentley had anticipated. A consultant with a Swiss company, the 71-year-old executive arrived in Wenzhou shortly after the Lunar New Year. He was preparing to start a consultancy project as soon as the public holidays ended and then return to Hong Kong later in February.

When he arrived in Wenzhou, the city had recorded only about 30 cases of the coronavirus. He thought the epidemic would soon be contained, considering Wenzhou’s distance from Wuhan.

What he didn’t take into account are the close links between people of both places. Wenzhou is famed for its business connections, with a vast number of its residents involved in an immense network of financial activities across the nation.

It’s estimated there’re some 180,000 Wenzhou residents living in Wuhan. Between Jan 23 and 27, an average of more than 3,600 people from Hubei, mostly from Wuhan, had entered Wenzhou daily, posing an “extremely high” risk of imported infection, according to Wenzhou’s vice-governor. 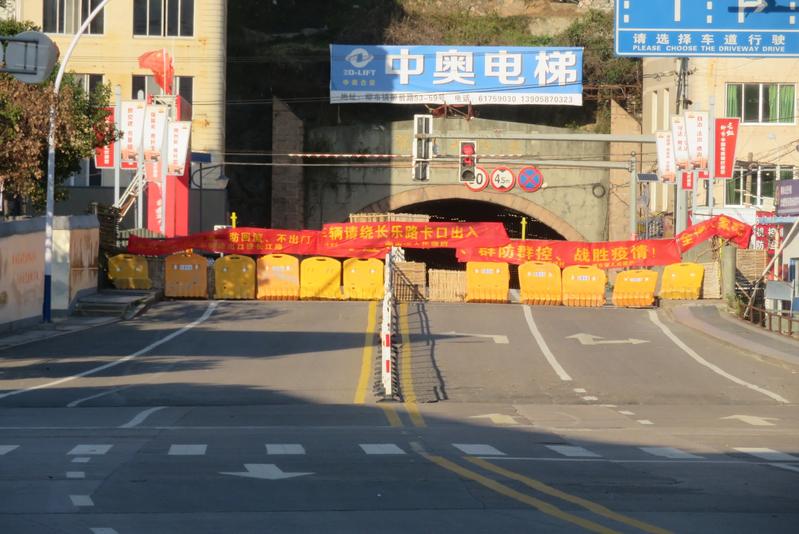 An entrance of a tunnel is seen blocked by road barriers in Wenzhou in February, as part of the measures taken to contain the spread of the coronavirus in the city. (PHOTO PROVIDED BY PETER BENTLEY)

The risk manifested itself. By Jan 31, the number of people infected with the disease had skyrocketed to 227 in Wenzhou. Unnerved by a possible deterioration in the situation, Bentley tried to reschedule his flight back to Hong Kong to Feb 1, but was unsuccessful as all flights had been fully booked.

He later learned that most flights between Hong Kong and the Chinese mainland had been suspended. What followed next was the complete and indefinite lockdown of Yueqing on Feb 4.

Bentley considered contacting Hong Kong officials in Zhejiang to help put him on a flight back to Hong Kong, but eventually gave up the idea as he thought there was nothing they could do to help. He realized he had no choice but to settle down in Yueqing for the time being.

Besides cutting off all links with other cities on the mainland, Yueqing has imposed stringent measures to control the movements of people. The entire city has been divided into many sections with barriers, as security guards patrol key entry points to make sure no one crosses the barriers. 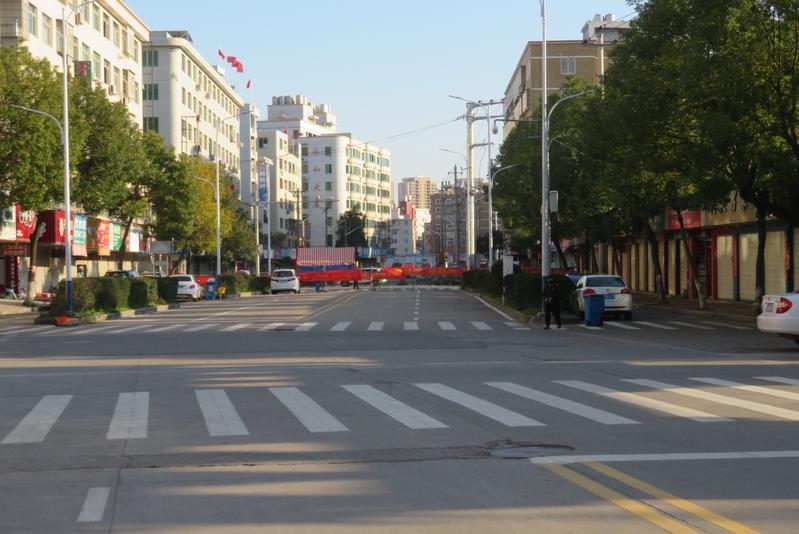 An empty street in Wenzhou amid the coronavirus outbreak. (PHOTO PROVIDED BY PETER BENTLEY)

Residents are required to stay at home and barred from leaving or entering their homes without having their body temperature checked and getting registered. After completing the procedures, they’re allowed to go to the supermarket once every two days.

Bentley has also heard that the local authorities would send inspectors to every home in the next few days to check on the health of residents.

Staying in his company’s apartment in Yueqing, Bentley is stuck at home most of the time and reads e-books. He goes out occasionally to buy necessities. Besides being bored, everything else seems all right with him.

The supermarket in his neighborhood has adequate supplies of food, such as meat, fish and vegetables, and prices are stable. Bentley also bought enough face masks before they ran out of stock.

Despite the hardship and inconvenience encountered, Bentley reckons such tough measures to control the outbreak are necessary although painful. “I think it’s like going to the dentist. You either do it now and it hurts, or you don’t do it now and later it will hurt much more and be far worse.” 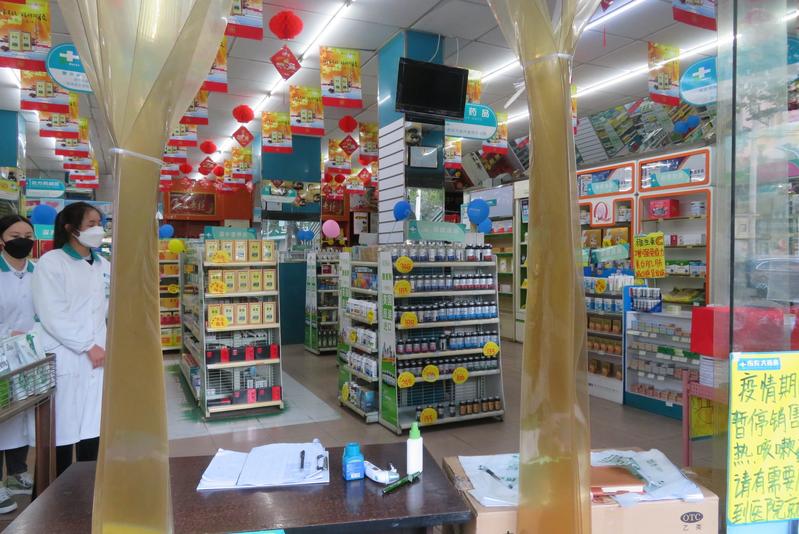 This undated photo shows an empty drugstore in Wenzhou. The drugstore is  one of the few shops that remain open in the city amid the coronavirus outbreak. (PHOTO PROVIDED BY PETER BENTLEY)

The strict anti-epidemic measures in the small city have given him confidence that the nation can defeat the virus and ride out the crisis. “From what I’ve read, what I’ve heard and what I’ve seen myself, I’m hopeful that the Chinese government can deal with it.

“I don’t know how long it will take, but the Chinese government does not give up easily. And when it sets his mind to do something, it will do it,” he said.

For the time being, Bentley still can’t go back to Hong Kong, and he also has no immediate plans to do so.

Hong Kong has, so far, confirmed 62 infections with one fatality. Under the HKSAR government’s mandatory requirements, Bentley will have to be quarantined at home for 14 days when he returns to the city. The measure is expected to last until May 8.

In the face of all the complications, Bentley felt that it’s safer to stay in Yueqing until the virus peak crisis time has passed, rather than return to the panic situation in Hong Kong.

Zheng Wanying contributed to this story.