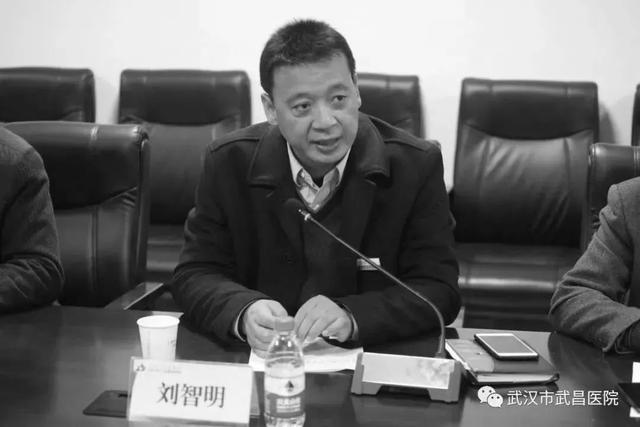 This undated photo obtained from the official WeChat account of Wuhan Wuchang Hospital shows its president Liu Zhiming, who succumbed to the novel coronavirus on Feb 18, 2020.

Liu Zhiming, head of Wuhan Wuchang Hospital in Hubei province, died of novel coronavirus pneumonia on Tuesday, according to the municipal health commission.

Liu, 51 and a neurosurgeon by training, became infected while working to combat the virus. He passed away at 10:54 am, Beijing time, Tuesday, despite his colleagues' all-out efforts to save his life.

The hospital, located on Yangyuan Street in the city’s Wuchang district, is a high-level hospital and one of the seven hospitals designated for the treatment of coronavirus patients in Wuhan.

Since the COVID-19 outbreak, Liu, regardless of personal safety, led all medical personnel of Wuchang Hospital on the front line to fight against the epidemic, making important contributions to the city's epidemic prevention and control, according to the eulogy issued by the health commission.

At least 3,000 medical workers across the Chinese mainland have been infected with the novel coronavirus during the nationwide pneumonia outbreak, according to the Chinese Center for Disease Control and Prevention.

At least 3,000 medical workers across the Chinese mainland have been infected with the novel coronavirus during the nationwide pneumonia outbreak, according to the Chinese Center for Disease Control and Prevention

Epidemic researchers at the Beijing-based center said that by the end of Feb 11, a total of 3,019 medical personnel from 422 hospitals receiving infected patients on the mainland had contracted the highly contagious virus.

There is a possibility that not all were infected in a professional environment, the center said.

These findings were included in a report on epidemiological characteristics of the novel coronavirus pneumonia that was published on Monday in the latest issue of the Chinese Journal of Epidemiology.

The report also said that, based on an analysis of 1,688 confirmed cases of medical workers with severe symptoms, nearly two-thirds of the affected medical workers were in Wuhan, capital of Central China's Hubei province and epicenter of the outbreak.

It also noted that the outbreak's climax among medical workers was highly likely to occur on Jan 28.

The report analyzed 72,314 infection cases, including 44,672 confirmed cases, on the mainland by Feb 11. A total of 1,023 people had died of the contagion by that time. The overall mortality rate of confirmed cases was 2.3 percent.