Wen Weijia, leader of the researcher team that developed the device capable of identifying the novel coronavirus, poses for a photo with a prototype of the device at his lab at the Hong Kong University of Science and Technology. (MIRIAM ZHANG / CHINA DAILY)

A device developed by a team of researchers at the Hong Kong University of Science and Technology is capable of identifying the novel coronavirus within 40 minutes. The team has donated its invention to Hubei province, the epicenter of the epidemic, and Guangdong province, another hard-hit area. The problem is the device is still awaiting the official stamp of approval. More than 68,000 people on the Chinese mainland have been diagnosed with the pneumonia-like disease, now officially named COVID-19. And more than 1,660 have been killed by it.

Wen Weijia, professor from Department of Physics at the Hong Kong University of Science and Technology

Wen, who is from the mainland city of Chongqing — one of the hard-hit areas — was pleased to see the results of his years of laboratory research could apply to a portable device that could identify more than 70 viruses, including SARS, avian influenza, swine fever, HIV and tuberculosis. He envisions the device will help his nation establish a well-rounded health care mechanism to fend off pandemics like the novel coronavirus outbreak.

The HKUST device adopted micro-fluidic chip technology — which Wen and his research team started studying in 2005. They published their first paper in 2009. It is like a novel micro-heater that could elevate temperatures up to approximately 30 C per second. The conventional PCR devices, which use semiconductor to heat up testing samples, raise temperatures by an average of 4-5 C per second.

The major shortcoming is that the device has not yet been approved by China’s National Medical Products Administration, and cannot be officially used in hospitals for clinical diagnoses.

The approval process on the mainland has been going on for more than two years since the device was invented in 2017. It took less than a year for the device to obtain international CE certification (EU standard), said Wen.

Wen said he regretted the delay. He believes, if the technology were approved for mass production and distribution on the mainland, it could play a greater role in controlling outbreaks — at least in helping to identify infections and isolating patients more efficiently.

In 2016, Wen’s PhD students decided to develop products based on the results of laboratory research and set up a biotechnology company in Shenzhen. In December 2017, the research team created such a device to fast-track the testing time for many viruses. In the past two years, it has passed various certifications and may be exported to most countries — but it has not been passed for use on the mainland. 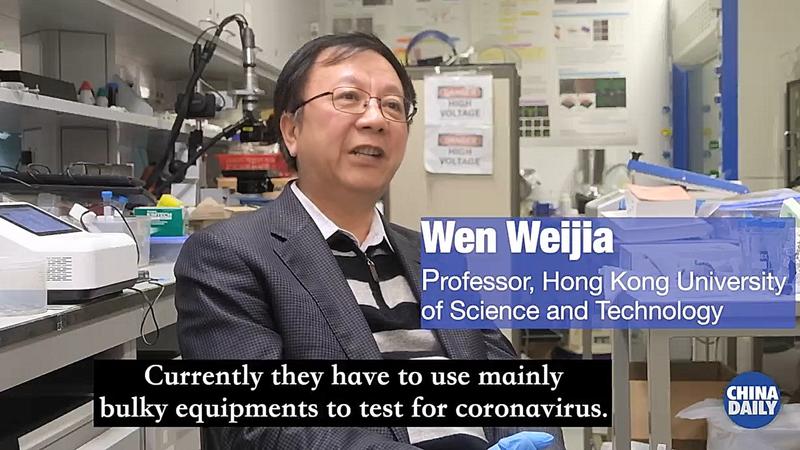 Contributing to the fight

In December, COVID-19, the pneumonia-like disease caused by the novel coronavirus, broke out and spread across the country in less than a month. The team started research immediately after obtaining the new coronavirus sequence on Jan 20 and submitted their testing kit within three days.

It was not a very challenging task for the research team, said Wen. Even a primary biotechnology company will take no more than a week, he added.

But the students, who are “young and smart”, in Wen’s words, were motivated and took the research seriously. They were so engrossed in the labs that some slept only four hours a day, he said.

The students, some of whom are from the mainland, hoped to come up with the testing kit as soon as possible, as they all felt a responsibility to use their scientific research to support the fight against the disease on the mainland, said Wen.

The team soon produced 10,000 testing kits and donated them to Guangdong province.

Diagnoses still require detection devices, which are in short supply at present and only available in hospital laboratories. Doctors have to take samples from suspected cases, pack and refrigerate those samples, and take them to the lab for the tests.

Wen’s team started out with a much more cumbersome device in 2017. Since then, it has been miniaturized from a larger machine into a portable device, like a small printer, over the past two years.

They donated more than 10 devices — all the prototypes they had — to centers for disease control and prevention on the mainland in Hubei and Guangdong provinces. Since it has not been certified by Chinese authorities, these centers can use the test results only as a “reference”, said Wen.

Governments in Japan and the United Arab Emirates have approached the team showing interest in importing the device. Hong Kong’s Hospital Authority is evaluating the research and expects to run tests on the device before introducing it to Hong Kong.

The team faces another problem. Even if other countries and regions choose to purchase the product, the company would be incapable of producing enough devices to meet the demand. Manufacturers on the mainland have suspended operations due to the outbreak.

Currently, PCR equipment is available only in first-class hospitals on the mainland. Almost all of the machines are imported from abroad and each costs around 500,000 yuan (US$71,560).

The research and production of medical equipment is a prolonged process, said Wen, and once that’s achieved, it takes another three years to be certified by the proper medical authorities. The problem is that over three years, advanced technology can become outdated, he added.

The approval process for medical devices could hamper the use of high technology in China’s public health services and limit the development of high-tech, medical and biological companies, Wen pointed out. All of this ultimately left the country’s health services less prepared to respond to an outbreak.

As a physical scientist, Wen aims to develop new technologies that can detect viruses faster. At the same time, he hopes the technology will apply to devices that are cheaper and small enough to equip rural hospitals and community clinics.

At the very least, it can make people less anxious and afraid when they have the ability to confirm whether there is an actual infection, Wen observed.