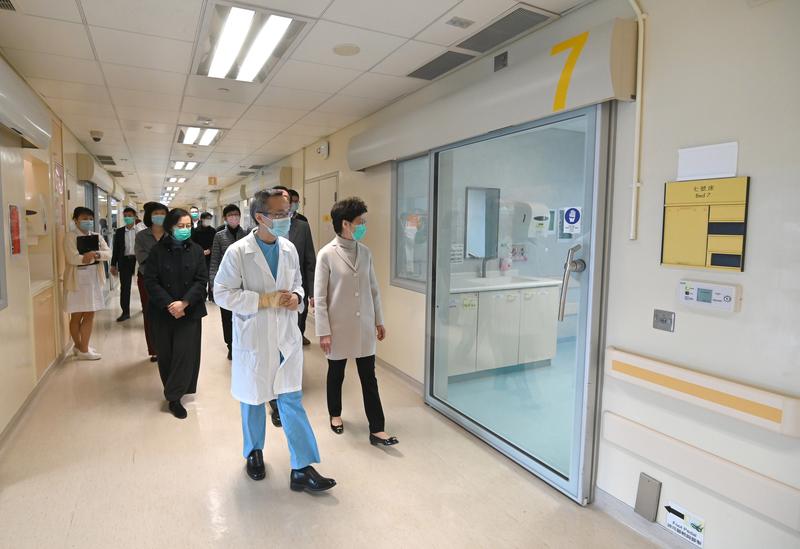 Hong Kong Chief Executive Carrie Lam Cheng Yuet-ngor on Sunday inspected key sites of the city’s efforts to prevent and control the novel coronavirus, which has infected 57 people in the SAR.

According to a government statement, she visited three major facilities of the ongoing anti-epidemic work, accompanied by Food and Health Secretary Sophia Chan Siu-chee and Development Secretary Michael Wong Wai-lun.

I have no doubt, with the concerted efforts of the government and the people, Hong Kong will definitely win the battle against the disease

Lam visited the Junior Police Call center in Yuen Long Pat Heung — a facility that is being renovated into a new quarantine center. Once in operation, the city will provide 90 sites by the end of February and could provide another 100 by April.

Lam also visited the Shenzhen Bay checkpoint. It is one of the city’s three remaining boundary crossings that are still open. Earlier, the government closed 11 checkpoints to reduce the cross-boundary flow of people.

At the checkpoint, Lam was informed of the implementation situation of the mandatory quarantine measure. Since Feb 8, all people who have visited the mainland in the previous two weeks have had to be quarantined 14 days once entering Hong Kong.

Lam also inspected goods clearance at the checkpoint. She confirmed with front-line officers that vehicles that are bringing in goods to Hong Kong are continuously delivering various daily necessities.

The chief executive also visited the Infectious Disease Centre of Princess Margaret Hospital. Established after the SARS outbreak in 2003, it is the city’s first medical center designated for epidemic prevention. Now the hospital has admitted about half of the city’s patients infected by the coronavirus.

Lam was briefed about the center’s endeavor to tackle the infection. She also viewed hospital facilities such as the isolation wards that are under renovation.

Lam expressed gratitude to the front-line healthcare workers and said the government is in full support of the anti-epidemic work in hospitals.

“I have no doubt, with the concerted efforts of the government and the people, Hong Kong will definitely win the battle against the disease,” she said.

Earlier, Lam visited Lei Yue Mun Park and Holiday Village — one of the city’s four quarantine centers — to view the works progress on the construction of temporary units for quarantine purpose. She also visited the temporary communication center at the Customs headquarters in North Point that is implementing real-time location sharing for people under quarantine.

By Sunday, the novel coronavirus has infected more than 60,000 people across the nation. Of the city’s 57 infection case, one patient has died and two have been released from hospitals.