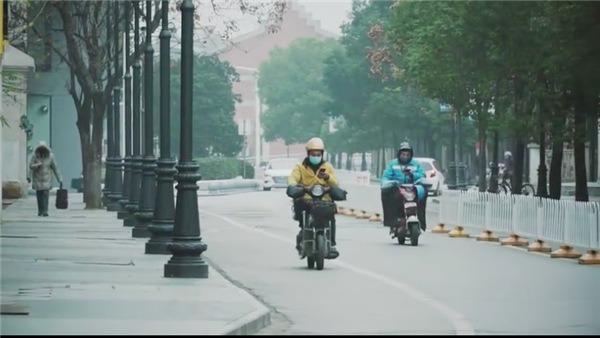 They are knights of mercy. Their armor, however, is not forged of cast iron, but is comprised of plastic helmets and brightly-colored jackets of blue, yellow and red. Their steeds are not sinewy stallions, but nippy, two-wheeled electric scooters and motorbikes, upon which they negotiate the deserted streets and lanes of Wuhan in Central China's Hubei province, the epicenter of the novel coronavirus outbreak.

Their quest: to run errands for city dwellers who are required to remain housebound to prevent further spread of the virus

Their quest: to run errands for city dwellers who are required to remain housebound to prevent further spread of the virus.

Instead of enjoying traditional family reunions during Spring Festival, these riders, who used to mainly deliver takeout orders, buzz around town all day long, helping residents by performing all kinds of errands.

As all public transportation systems have been halted in the city since Jan 23 in a bid to reduce population mobility and contain the spread of the deadly virus, people have become more dependent on this group of modern-day cavaliers to deliver the everyday essentials.

One, nicknamed Laoji, in his early 30s, didn't go back to his hometown Danjiangkou city in northwest Hubei province this Spring Festival. He wanted to help the people of Wuhan. He and his colleagues have helped keep the city's residents well fed and well provided for.

Every morning, after measuring his own temperature and disinfecting the big insulated food delivery container fixed on his bike, Laoji, wearing a mask, starts to busy himself by flitting between restaurants, supermarkets and drugstores before delivering to residential compounds that are scattered across the city. 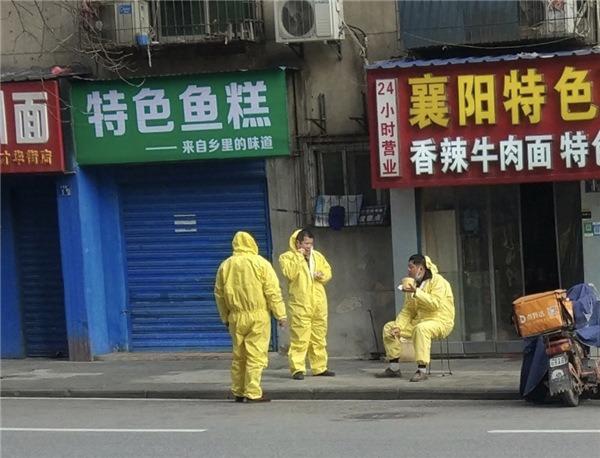 Deliverymen wearing protective suits have meals and rest on the sidewalks of Wuhan. (LAO JI / FOR CHINA DAILY)

"I live near the Xudongyi Road in Hongshan district. The road would ordinarily have been bustling with office workers, shoppers and vendors," he says. "However, after the city was put on lockdown and many stores shut down, there are just a few pedestrians."

Recently, at the request of his customers, he has helped them to purchase surgical masks, respirators and disinfectants that protect them from becoming infected.

He has also delivered fruit, vegetables and other daily necessities, and has taken care of pets left home alone by owners during the holidays who have been unable to return. One day, he even rescued a cat from a rooftop that had escaped from a flat. 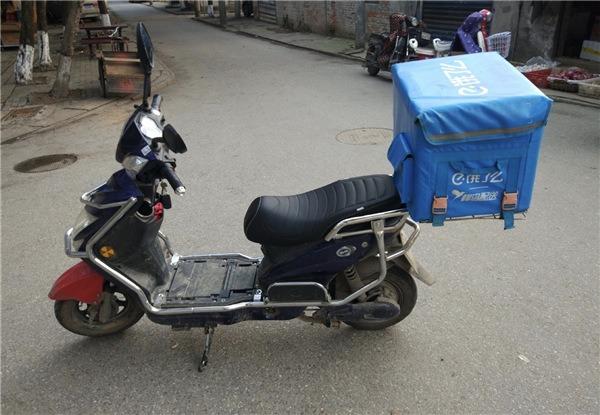 The electric vehicle Laoji uses to run errands for his customers. (LAO JI / FOR CHINA DAILY)

On Jan 25, he was asked to deliver a meal for more than a dozen people to a local care center where medical staff were working to combat the epidemic.

"The recipient was very surprised to get the packages of rice and other food," recalls Laoji. "I guess it's a warmhearted stranger who ordered the meal for those hardworking and courageous medical professionals."

And the next morning, when he was about to send a homemade meal to a hospital, he found a note which read: "This is prepared by my mom for my dad who is a doctor fighting at the front line. Thank you for the delivery."

"These words deeply moved me. I really want to express my gratitude to the doctor and his colleagues," Laoji says.

In a short video on Sina Weibo, the Chinese equivalent of Twitter, he recorded a moment when, one night after a day's exertions, he stopped at a sidewalk for a well-deserved rest. Suddenly, a female voice echoed from an apartment building: "Wuhan, jiayou (stay strong)!"

Upon hearing that clear, firm shout, the deliveryman's eyes immediately welled up.

Laoji has documented his daily experiences by sharing them on Sina Weibo, attracting nearly 15,000 followers.

One user commented on one of his posts: "I have been overwhelmed by the harrowing news of the increasing confirmed cases of coronavirus across the country.

ALSO READ: Eye on the storm

"Fortunately, I found a feeling of warmth and relief here between the lines of Laoji's posts."

And many other online users who viewed his posts have expressed their thanks to Laoji and his fellow deliverymen.

Laoji says he has also gained a refreshing sense of his own worth over the past few weeks.

"Frankly speaking, the delivery job doesn't require too much skill, and I used to think it was kind of basic," he says. "However, this crisis has changed that view. We are also helping, with our efforts, to guarantee that society can function as usual."

Apart from sharing daily experiences amid the outbreak on the social media, Laoji also notes the reasons why he loves the city.

He recalls how nicely people in Wuhan treated him before. For example, Laoji remembers being late delivering a takeaway, far behind the scheduled time, on a rainy summer night. But, instead of complaining about his failure to deliver the meal on time, the customer received the package with words of thanks. Another day, when his bike had broken down, a taxi driver volunteered to give him a ride and refused to take any fare.

"I have many more similar stories to tell," he says. "I want to talk about these things because it shows the goodwill of this city."

And, in the process of sharing with people what he's seen and experienced, Laoji confesses, "it's also a process of self-healing and rebuilding my confidence in this world".