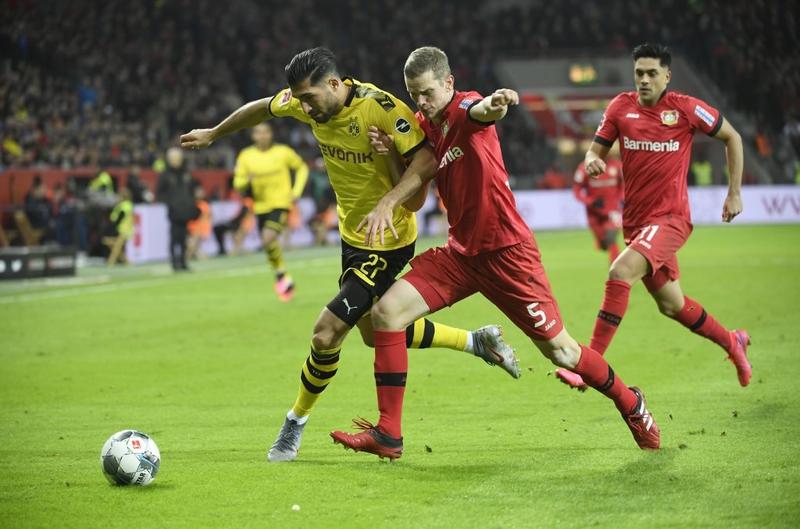 BERLIN - Bayer Leverkusen gave away their lead but rallied back on the late goals from substitute Leon Bailey and Lars Bender to secure all three points following a seven-goal thriller in the 21st round of Bundesliga on Saturday.

Both teams started highly motivated into the game and exchanged half-chances at each end of the pitch. Dortmund created the first clearcut opportunity in the 19th minute when prolific new arrival Erling Haaland tested Leverkusen goalkeeper Lukas Hradecky from tight angle.

The opener was scored at the other end of the pitch though, as Kevin Volland capitalized on Nadiem Amiri's pass into path to beat Roman Burki from the edge of the box into the far post bottom corner in the 20th minute.

The "BVB" gained the upper hand and turned the tides at the half-hour mark when winter signing Emre Can curled an effort from 30 meters into the top right corner.

Axel Witsel squandered the chance to extend the lead in the 42nd minute and got punished one minute later as Leverkusen equalized through Volland, who sewed up his brace and recorded his ninth goal of the season.

Dortmund thought they had grabbed the lead in the 52nd minute but Sancho's goal was disallowed due to a foregone foul play.

Leverkusen had also the chance to break the draw at the hour mark but Kai Havertz rattled only the right post from promising position.

Lucien Favre's men punished Leverkusen's wastefulness with the next attack as Raphael Guerreiro made the most of Achraf Hakimi's assist with 65 minutes played.

The "Werkself" had the last laugh after substitute Bailey tapped home a loose ball in the 81st minute before Bender completed the 4-3 comeback victory by header one minute later.

The following games conclude the 21st round on Sunday: Borussia Monchengladbach host Cologne and Bayern Munich encounter Leipzig for the top clash.