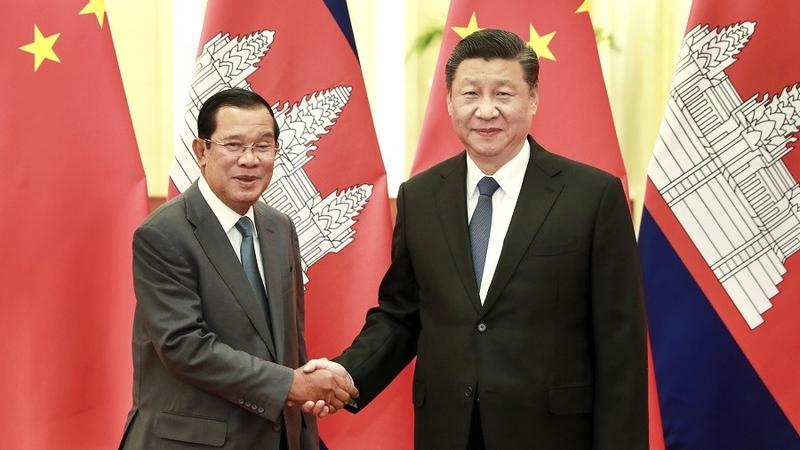 Noting that the Chinese government and people are currently doing their utmost to fight the pneumonia epidemic caused by the novel coronavirus, Xi said: "A friend in need is a friend indeed as the Cambodian people stand with the Chinese people at this special moment."

Moreover, the Cambodian prime minister had expressed strong support to China on many occasions and even made a special tour to China on Wednesday, which demonstrated unbreakable friendship and mutual trust between the two sides and showcased the essence of building a community of shared future of the two countries, said Xi, adding China deeply appreciated Cambodia's such moves.

Xi stressed that the Communist Party of China and the Chinese government had adopted the most thorough and strict prevention and control measures in a highly responsible manner toward the Chinese people and the international community in dealing with the epidemic.

"At present, the prevention and control work is achieving positive results," said Xi.

Xi said the Chinese nation had overcome adversity through its development and therefore it has confidence and capability to win the fight against the outbreak of the epidemic.

"We will continue to strengthen cooperation with other countries, including Cambodia, in an open and transparent manner to effectively deal with the epidemic and maintain global and regional public health security," said Xi.

"We will take good care of Cambodian citizens in China, including Cambodian students studying in China, and protect their lives and health as we treat Chinese citizens," said Xi.

Xi said that in 2020 China will maintain close high-level exchanges with Cambodia, implement the action plan on building a community of shared future of the two countries and uplift China-Cambodia relations to new heights.

Hun Sen said when China was in a difficult time, the Cambodian people stood firmly with the Chinese people to undergo and overcome common difficulties, and the two countries are truly "steadfast friends."
Hun Sen said that he decided to make a special visit to China with an aim to showcase Cambodia's support to China in fighting the outbreak of the epidemic.

The prime minister expressed gratitude for China's care of Cambodian citizens in China, expecting this tour to reinforce their confidence.

In the face of the epidemic, some countries have adopted some extreme restrictive measures, which are not desirable. What is more terrible than the epidemic is the panic itself, he said.

Hun Sen said Cambodia will continue to carry out normal cooperation and exchanges with China and is committed to working with China to build a community with a shared future of the two countries.

Stressing that the Chinese government and people are doing their best to combat the epidemic, Li said the people's safety and health always come first. China is taking epidemic prevention and control as the most important task at present, striving to guarantee supplies of key medical materials and people's daily necessities, to safeguard normal life for all people in China.

For his part, Hun Sen expressed condolences to the people affected by the epidemic and appreciation to the Chinese government's care for Cambodian students and diaspora in China.

"We will stand firm with the Chinese government to eliminate panic and overcome difficulties together," Hun Sen said, expressing his belief that the Chinese people would surely win the fight against the epidemic.

Cambodia is willing to strengthen pragmatic cooperation with China in various fields and continuously promote bilateral relations to a new high, he said.

Separately, eighty-six Cambodian families whose children had received free heart surgeries in China had donated more than 5,000 masks to Chinese doctors to help them fight against the novel coronavirus, Xinhua reports from Phnom Penh.

Demand for masks has soared in China due to the coronavirus outbreak. The overall confirmed cases on the Chinese mainland had reached 24,324 by the end of Tuesday, China's National Health Commission said, noting that a total of 490 people had died of the disease.