By Wang Xiaoyu and Cheng Si 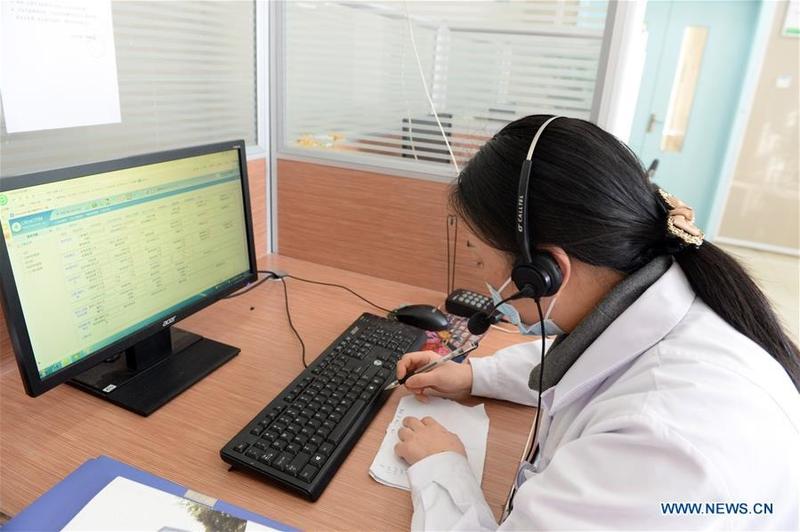 A psychologist answers a call from a citizen in Hefei, east China's Anhui province, Jan 31, 2020. In the face of the outbreak of pneumonia caused by the novel coronavirus, Anhui province has organized a psychological aid medical team and started a 24-hour hotline to help those affected by the epidemic. (HUANG BOHAN / XINHUA)

"Colleges equipped with psychological centers are also encouraged to step up intervention and counseling to students who may be affected by the disease's spread," she said at a news conference held on Monday.

The commission has recently released a protocol guiding emergency mental interventions during the novel coronavirus outbreak.

The guideline proposes a fourtier system based on the risk of developing mental issues, with patients confirmed of contracting the virus, front-line medical workers, disease prevention and management staff being placed on the highest level.

A video clip circulated online recently shows a doctor in a protective suit bursting into tears and shouting into a phone. The doctor in Wuhan, Hubei province, where the virus first surfaced, later told the local newspaper Changjiang Daily that he was negotiating with supervisors on refitting the quarantine wards to take better care of patients.

Days of intensive work had exhausted him and caused him to lose his temper for a brief moment, he was quoted as saying. The doctor quickly collected himself and went back to treating patients.

Yang Fude, Party secretary of the Beijing Huilongguan Hospital, a psychiatric specialty hospital, said many medical workers and personnel in charge of registering and screening residents in neighborhoods have faced tremendous pressure and are pushing their mental and physical limits.

"Administrators should set up proper shift schedules to allow enough rest between work assignments," he said. "It is also suggested that front-line workers learn to relieve stress through simple workouts or communicating with friends and family members."

For residents in Wuhan and several neighboring cities that are under strict lockdown, with public transportation halted and flights and trains suspended, Chen Xuefeng, deputy director of the Chinese Academy of Sciences' Institute of Psychology, said it is an instinct to become overtly agitated in regions hit hardest by the virus.

"I suggest people faced with travel restrictions take a rational view of the decision and take the initiative to learn about protection measures and psychological relief methods," she said.

The Hubei government has also set up a psychological support hotline, 4007-027-520, that went into operation on Friday. Experienced counselors will receive calls from 9 am to 9 pm each day.