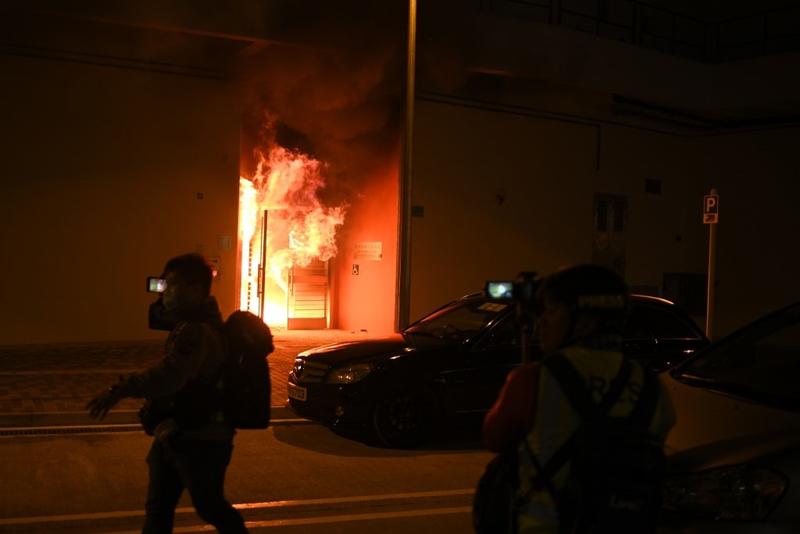 An entrance to a vacant housing block of the Fai Ming Estate is seen on fire as residents protest against plans for a empty local housing estate to be used as a temporary quarantine camp for patients infected by a novel coronavirus and frontline medical staff. In Hong Kong's the Fanling district on Jan 26, 2020. (PHILIP FONG / AFP)

HONG KONG - In a protest on Sunday against a now-shelved government proposal to set up a quarantine center in Fanling, 11 people aged between 16 and 42, were arrested.

They were variously charged with unlawful assembly, obstructing police officers and possessing of instrument fit for unlawful purposes, police said

They were variously charged with unlawful assembly, obstructing police officers and possessing of instrument fit for unlawful purposes, police said.

About 200 protesters, some masked, set up roadblocks to vent their anger at a government proposal to turn an unoccupied public housing estate in the area to quarantine those who have been in close contact with patients infected with the novel coronavirus that originated in central China’s Wuhan.

In the rampage, some radical protesters damaged traffic lights at a road junction and threw petrol bombs into the lobby of the estate. Police said they had intercepted 30 radicals and made 11 arrests.

Hong Kong's Centre for Health Protection assuaged public concern by saying it will halt plans to use Fai Ming Estate in Fanling as a possible quarantine site.

In Mong Kok, skirmishes erupted for the second straight night of the Lunar New Year between police and anti-government protesters who blocked roads and threw hard objects at officers.