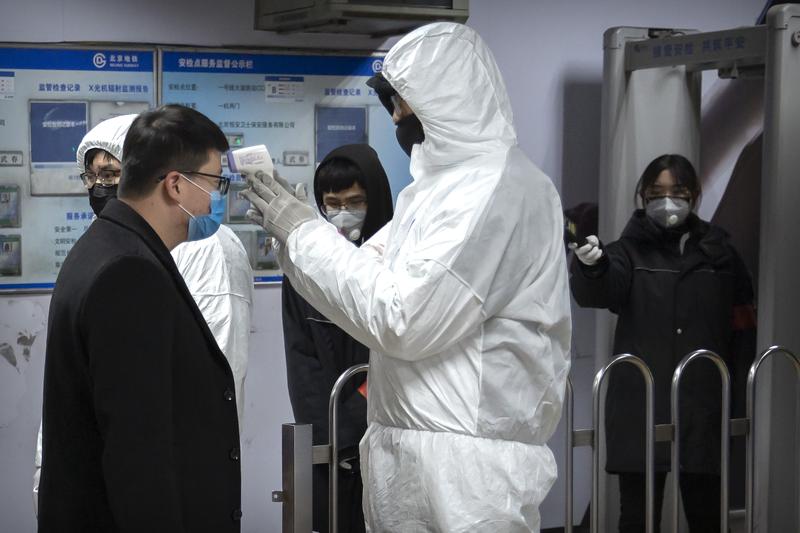 A worker wearing a hazardous materials suit takes the temperature of a passenger at the entrance to a subway station in Beijing, Jan 26, 2020. (MARK SCHIEFELBEIN / AP)

BEIJING - Screening measures have been stepped up at international airports in many countries to prevent the spread of the novel coronavirus (2019-nCoV), which has already claimed 56 lives and infected at least 1,975 people in the Chinese mainland as of Saturday.

WHO Director-General Tedros Adhanom Ghebreyesus has thanked the Chinese government for its cooperation and transparency, saying it has been successful in isolating and sequencing the virus quickly

The new virus causes cold- and flu-like symptoms, including cough and fever, and can worsen to fatal pneumonia.

In France, with three confirmed cases, the country will open a medical center at Paris's Charles de Gaulle airport on Sunday to carry out checks on travelers from China, state-run radio broadcaster France Info reported.

In Lebanon, Health Minister Hamad Hassan said Saturday that a medical team has been set up at the capital Beirut's international airport, with thermal scanners being used to screen travelers upon arrival.

Airport officials have said a quarantine area has been set up, while all passengers arriving from China and Thailand have been asked to complete a medical questionaire before landing.

In Sudan, "the health authorities will monitor all arriving passengers to the country," said Babiker Al-Magboul, director of the General Department of Emergency and Epidemic Control at the Health Ministry, adding that "a treatment center will be established at the airport on Sunday."

The World Health Organization (WHO) said Thursday that it was "too early" to declare the novel coronavirus outbreak a public health emergency of international concern, but has warned that the number of cases may rise as much about the virus remains unknown.

German Health Minister Jens Spahn said during a television interview on Thursday that "We take this very seriously. We are vigilant, but have a cool head at the same time."

Health authorities in the United States and Britain have said the immediate health risk from the 2019-nCoV to their respective populations is considered "low."

Thailand has taken health quarantine measures and said it is ready to follow WHO advice.

Mongolia decided to close all schools and kindergartens until March 2 to prevent the spread of the virus.

New Zealand's Health Minister David Clark said although there have been no reported cases of 2019-nCoV in New Zealand, the government has decided to take precautionary measures after Australia confirmed one case.

The virus-hit Chinese city of Wuhan, already on lockdown, has now banned most private vehicles from downtown areas. Thirty provincial-level regions in China have activated a first-level emergency response, the highest in a four-tier system, to contain the spread of the viral pneumonia.

Chinese health authorities announced Sunday that 1,975 confirmed cases of pneumonia caused by the novel coronavirus, including 324 in critical condition, had been reported in the country by the end of Saturday.

In addition, 10 confirmed cases had been reported in the Hong Kong and Macao special administrative regions and Taiwan, with five in Hong Kong, two in Macao and three in Taiwan.

WHO Director-General Tedros Adhanom Ghebreyesus has thanked the Chinese government for its cooperation and transparency, saying it has been successful in isolating and sequencing the virus quickly, and that it has shared the virus's genetic sequence with the WHO and the international community.

On Wednesday, in separate phone conversations with French President Emmanuel Macron and German Chancellor Angela Merkel, Chinese President Xi Jinping said China is willing to work with the international community to effectively tackle the spread of the disease and maintain global health security.