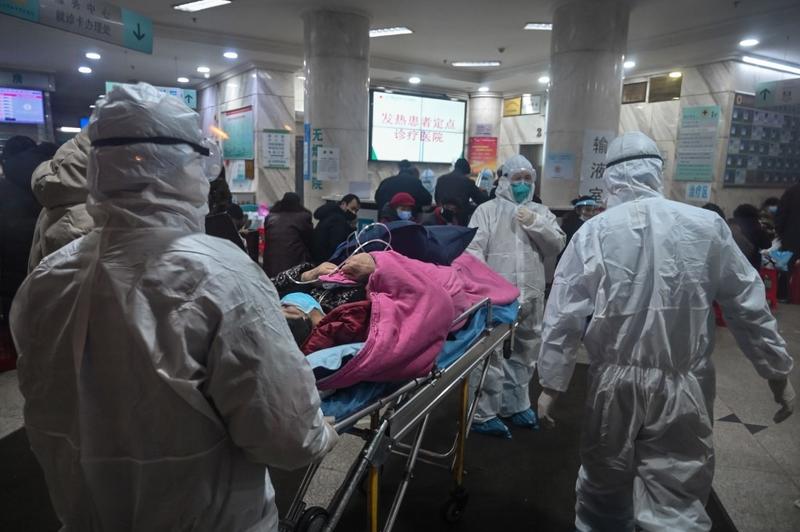 In this photo taken on Jan 25, 2020, medical staff wearing protective clothing to protect against a previously unknown coronavirus arrive with a patient at the Wuhan Red Cross Hospital in Wuhan. (HECTOR RETAMAL / AFP)

BEIJING - Chinese health authorities announced Sunday that 1,975 people across the nation had been confirmed to be suffering from pneumonia caused by the novel coronavirus (2019-nCoV) by the end of Saturday and 324 were in critical condition.

By Saturday, the pneumonia situation had resulted in 56 deaths, while 49 people had recovered and 2,684 remained in hospitals

In the past 24 hours, 688 new confirmed cases, 1,309 new suspected cases and 15 deaths from the disease (13 in Hubei, one in Shanghai and one in Henan) were reported, according to the National Health Commission (NHC).

By Saturday, the pneumonia situation had resulted in 56 deaths, while 49 people had recovered and 2,684 remained in hospitals.

A total of 23,431 people who came in close contacts with the patients have been traced, the commission said, adding that among them, 21,556 were under medical observation while 325 had been discharged on Saturday.

In addition, ten confirmed cases had been reported in Hong Kong and Macao special administrative regions and Taiwan, with five in Hong Kong, two in Macao and three in Taiwan.

Thirty provincial-level regions reporting cases of novel coronavirus in China have activated first-level emergency response to contain the spread of the viral pneumonia.

To contain the spread of the novel coronavirus, all inter-provincial highway passenger bus services in Beijing will be indefinitely suspended from Sunday, local authorities said Saturday.

The government is stepping up containment efforts with people having traveled from China's Wuhan now required to place themselves under medical observation at home for 14 days even without symptoms of pneumonia, according to an official document.

County-level health departments are now required to issue notices to alert those travelling from Wuhan, requiring them to report to community health stations and stay at home for a 14-day medical observation.