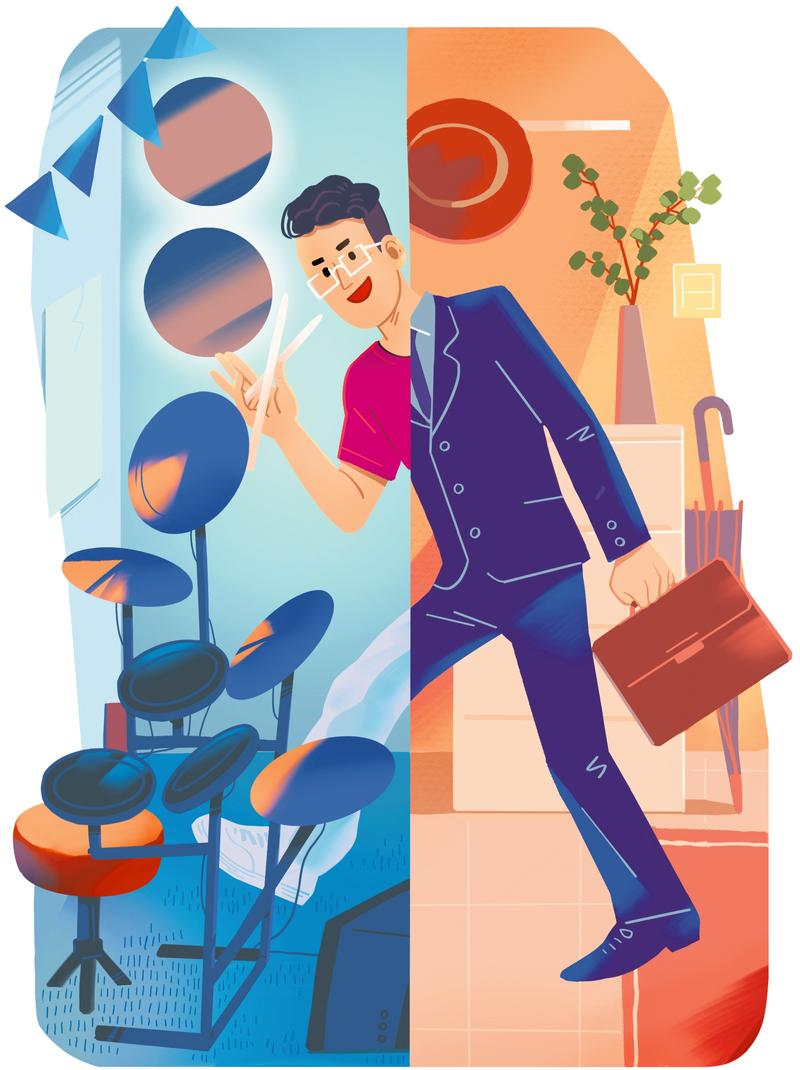 Having a stable job to make a living and another "sideline" job to earn extra money has become a fashionable lifestyle for younger generations.

The development and popularity of the internet has generated occupations that are especially unlimited in space and time. With a lower barriers to entry, these businesses allow more people to make quick cash.

Qiu Xiaoai works in the purchasing department of a State-owned company that produces bus carriages. Her everyday work includes buying machine parts from suppliers according to instructions from her superior.

At night, Qiu likes watching TV in her bedroom, while selling makeup on WeChat. She posts advertisements via social media, chats with her potential customers and packages the makeup she sells for delivery the next day.

"I work routinely like a machine during the day time, but I get excited while doing my own business. I feel energetic even if I need to do a sideline after work," the 25-year-old makeup seller said.

About 8.2 percent of people have a sideline income, according to a report last year by Zhaopin, a Chinese online recruitment service provider. The report was based on a questionnaire survey of 22,000 white-collar workers.

WeChat business, design and writing are the top three sideline job categories that white-collar workers favor, accounting for 26.8, 16.7 and 10.8 percent of survey respondents who have sidelines, the report said.

Seller on WeChat, which promotes products by posting advertisements on the WeChat Moments and sells them to users' friends, is the most popular avocation. It is easy to get started and flexible in time and location, as well as a good way to make quick cash, the report said.

Second to WeChat business are design and writing, which have no space and time limitations and a good market demand. Other popular avocations include private tutoring, insurance sales, photography and translation, it said.

The report also lists some emerging side jobs, including mobile gaming, mobile applications programming, tea art performing and designated driving. The report said that as long as one has expertise in a technology or talent, it's possible to develop that expertise into a second career.

Early last year, Zheng Qinghua, a 28-year-old mobile game enthusiast, developed a way to earn some pocket money－accomplishing mobile game tasks for others and helping them pass game levels. He got paid between 20 (US$2.90) to 50 yuan in return for each client.

Zheng is a skilled player of the hit mobile game Arena of Valor and has passed more levels than his friends. Once, a friend of Zheng failed many times in a certain task and asked him to help him pass it. Zheng helped the friend and he got 20 yuan as a "thank you" gift from the friend.

"It's terrific that I can earn money for playing games," Zheng said. When he passed a game level for others, he would take a screen shot and post it on social media, together with the payment collection record, to tell his friends he could offer the service.

"Many people want to pass game levels because they want to get new items, but they lack skills or don't have time to keep playing," he said. Now and then Zheng would get an order from his friends.

"The little business added some color to the dull routine of my job," he added. Zheng has been an office clerk at a power plant in Fujian province for about three years since his graduation.

According to the Zhaopin report, about 85 percent of respondents didn't get a promotion last year. About 62 percent said their salaries remained the same, 21 percent got a pay raise and 17 percent had their pay cut.

Lu Jie has been a private high school teacher in Beijing for four years and he also works as a private tutor during his spare time to earn extra money. He gives one-on-one homework tutoring three times a week, with each time lasting about two hours.

"My payment as a schoolteacher has not been high in the early years of my career, so I have earn extra to support myself. It's tiring but luckily I have a way to gain money, otherwise, I would have lived a more frugal life," the 30-year-old said.

Qiu Xiaoai, the makeup seller in which WeChat, has set the business as her Plan B for long time. "I am always an obedient daughter and many steps of my life were arranged by my parents," she said.

Qiu said she studied a major that she was not interested in college and after graduation, she chose a stable job in her hometown in 2017, under her parents' will.

"I'm interested in makeup and I wanted to do something in the fashion industry, but that was not allowed by my parents," she said, adding that "I gave up, but I have kept it in mind that someday I will give it a try."

When Qiu had a little disposable income after working for a year, she started to carry out her Plan B. She purchased makeup of overseas brands in bulk at low prices and began selling them to her friends at market price via social media. The business cashes in.

Not all the people can carry their second careers for long.

The sideline work of Zheng, the mobile game lover, lasted for just a half a year. He quit his own business in September when he was caught by his boss playing mobile games at the office. His boss talked with him and required him to focus on work.

"It was embarrassing. But luckily, he forgave me," Zheng said. "I kind of calmed down and came to my senses after the talk. After all, it's impossible for me to give up my main job and become a professional game player."

"I was getting bored and felt little fun when playing games became a job, because sometimes I failed many times before finishing a task in games. It was stressful and I earned dozens of yuan for playing for one client," he said.

"It was not worthwhile to become absent-minded at my main job. It was penny-wise and pound-foolish. So I decided to focus on my own career," he said.

Lu, the teacher, said tutoring students during his spare time is a temporary choice and that he could never regard the avocation as any kind of a long-term career.

"It's exhausting when the sideline occupies a day and a half of my weekend. I sacrifice my time resting or with family to earn extra because I really need the money. If I had a choice, I would have not done that," he said.

Lu has reduced the students he tutored during the weekends from three to one this year because his salary has gradually risen in the past years. "I am not so cash-strapped now, so I reduce the time I spend on my sideline."

Not everybody leaves their sidelines, though.

Unlike Zheng and Lu, Qiu, the WeChat seller, said: "WeChat business is my second career because I have really gained a sense of accomplishment from it and I feel it can be a stable and sustainable business."

Qiu's sideline income exceeds her main job now. She gains a stable payment of about 5,500 yuan each month from her main job.

She bought herself a car worth about 200,000 yuan recently as a new year gift for herself. "It was the most expensive thing I have bought by myself. I couldn't have afforded it with merely the income from only one job."