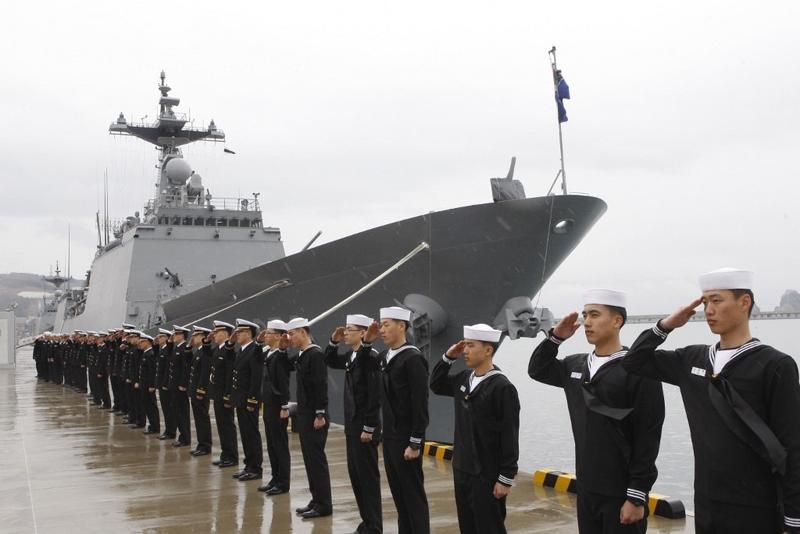 File photo of South Korean Navy sailors salute during a ceremony marking the launch of the "Cheonghae" unit in southeastern port city of Busan on Mar 3, 2009. South Korean government decided to temporarily expand the deployment of the Cheonghae military unit to the Strait of Hormuz. (CHOI JAE-HO / AFP)

SEOUL — South Korea’s military said on Tuesday it plans to expand the deployment of an anti-piracy unit now operating off the coast of Africa to the area around the Strait of Hormuz, after the United States pressed for help to guard oil tankers.

Attacks on oil tankers in the Strait of Hormuz off the coast of Iran last year prompted US officials to call for allies to join a planned maritime security mission.

As a key US ally, South Korea has debated the prospect, and the decision to divert a navy unit already in operation southwest of Arabia comes as a compromise that will not require fresh parliamentary authorization.

While South Korea will deploy its forces to the area, including into the Persian Gulf, it won’t officially be joining an international coalition of forces, the defense ministry said.

“The South Korean government decided to temporarily expand the deployment of the Cheonghae military unit in consideration of the current situation in the Middle East to ensure the safety of our citizens and free navigation of our vessels,” a ministry official told reporters.

The step would ensure the safety of citizens and free navigation of South Korean vessels, he added.

The Cheonghae unit will continue with its mission while it cooperates with the coalition, the ministry said, adding that the United States had been briefed on the decision, which was also explained to the Iranians separately.

The Strait of Hormuz is a busy passageway into the Gulf, with vessels sailing through it approximately 900 times a year for South Korea, which gets more than 70% of its oil from the Middle East, the defense ministry says.

The Cheonghae unit has been stationed in the Gulf of Aden since 2009, working to tackle piracy in partnership with African countries as well as the United States and the European Union.

Among its operations were the rescue of a South Korean ship and its crew in 2011, shooting eight suspected pirates and capturing five others in the incident.

The South Korean troops have also evacuated South Korean citizens from Libya and Yemen, and as of November 2018 had escorted around 18,750 South Korean and international vessels.

South Korea, the world’s fifth-largest crude oil importer and one of Iran’s major oil customers, stopped importing Iranian crude from May after waivers of US sanctions ended at the start of that month..