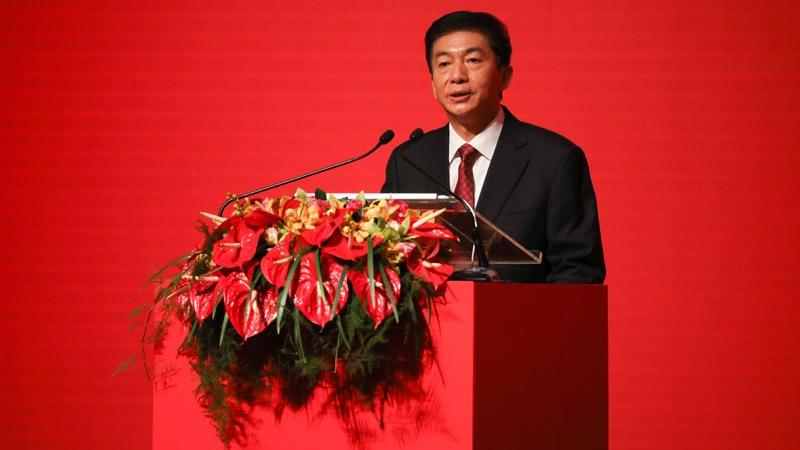 The central government’s new liaison chief in Hong Kong said on Wednesday that ending violence and chaos remains the most pressing task for the city, and appealed to the community to cherish Hong Kong and uphold the “one country, two systems” principle.

Luo Huining, the new director of the Liaison Office of the Central People’s Government in the Hong Kong Special Administrative Region, made the remarks at the office’s annual Spring Festival reception, held at the Hong Kong Convention and Exhibition Centre. Luo, who assumed his new post on Jan 6, presided over the annual event for the first time.

Luo called on the whole community to cherish their home by making best use of “one country, two systems”, upholding the core values of the rule of law and a civilized society

In his 18-minute welcoming speech, Luo noted that Hong Kong had not completely emerged from the prolonged social unrest, which has dragged Hong Kong’s economy into a recession and severely affected the residents’ lives.

Luo then called on the whole community to cherish their home by making best use of “one country, two systems”, upholding the core values of the rule of law and a civilized society, and realizing the aspiration of prosperity and development.

“Harmony in a family makes everything successful,” Luo said, quoting President Xi Jinping, who made the remarks during his inspection tour in Macao late last month.

The SAR’s success hinges on people who love the country and Hong Kong working in unity, its some 180,000 civil servants faithfully discharging their responsibilities, and all sectors of society making concerted efforts to uphold the rule of law and to support the government in its effective exercise of law-based governance.

He also expressed hope that Hong Kong’s youth will foster a sense of national identity, a love for Hong Kong and an international perspective, and make their future as they partake in the development of the country and the SAR.

Raymond Tam Chi-yuen, former secretary for constitutional and mainland affairs of the HKSAR government who attended the reception, praised Luo’s repeated calls for people to cherish the city. He said thisdemonstrated the new liaison chief’s earnest hope for all Hong Kong people to treasure the city and get it back in order.

Jonathan Choi Koon-shum, chairman of the Hong Kong Chinese General Chamber of Commerce, said one important message conveyed in Luo’s speech is for people “to unite”. Under the current circumstances, all sectors of society should join to support the SAR government and quickly get the city back on track.