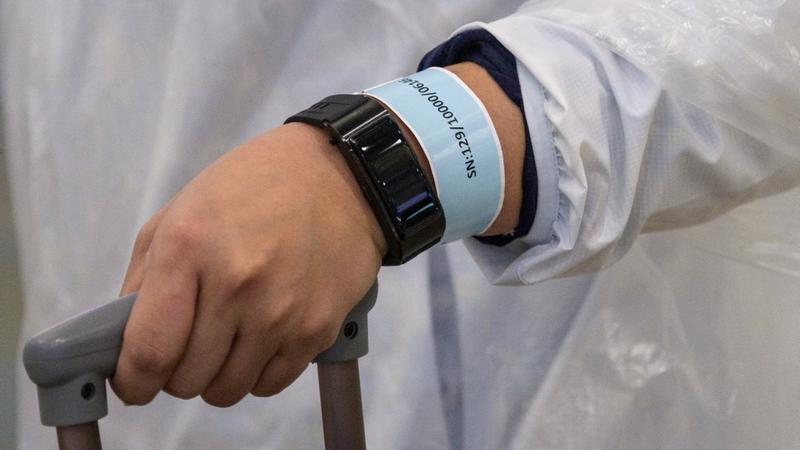 A newly arrived passenger wears a quarantine tracking wristband (blue) to monitor new arrivals as a measure to stop the spread of the COVID-19 at Hong Kong’s international airport on March 19, 2020. (ANTHONY WALLACE / AFP)

HONG KONG - Hong Kong Secretary for Security John Lee Ka-chiu said Friday that 77 violators of home quarantine orders have been sent to quarantine camps since the policy that applies to all arrivals came into effect on March 19.

Among the 77 cases, 40 were reported by members of the public, including family members of the quarantined, passersby and security guards at buildings or hotels, said Lee at a press conference.

Lee criticized those violators for being “very irresponsible” and thanked those who had reported the violations.

The Department of Health will decide whether to seek Department of Justice’s opinion for prosecution on the basis of the evidence collected by the police.

To cope with an increasing number of imported COVID-19 cases, the Hong Kong government began enforcing a 14-day mandatory home quarantine for all arrivals from overseas on March 19.

Lee told the press conference that the number of people entering Hong Kong has dropped sharply following the implementation of a series of immigration restrictions, including banning all foreign visitors from entry, effective Wednesday.

The total daily arrivals to Hong Kong dropped to 4,458 on Thursday from 14,783 on Tuesday. More than 90 percent of the arrivals on Thursday were Hong Kong residents.

Only 287 non-local residents entered the city through three remaining ports on Thursday, a drop of 87 percent from 2,246 on Tuesday.

Meanwhile, the government announced it will prohibit for 14 days gathering of more than four people in public areas, starting Sunday.