Feeling the need for speed 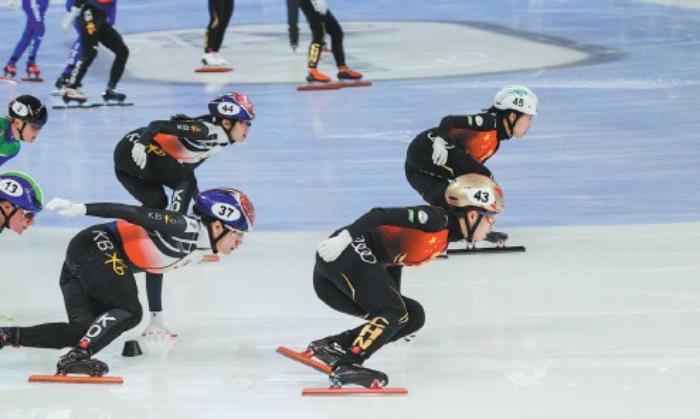 After a mixed bag of results in its season opener, China's short-track speed skating team has vowed to shake off the rust in time for a strong home run at the Beijing 2022 Winter Olympics.

Returning to the international stage for the first time in two years due to the pandemic, the Chinese short-track squad proved it remains a force to be reckoned with by winning two relay golds at last week's International Skating Union World Cup leg in Beijing.

However, those successes were offset by disappointments in the individual events against the sport's leading powers.

As one of the world's powerhouses in the sport, the Chinese short-track team has amassed 10 Olympic gold medals out of the country's total of 13 across all sports since China's Winter Games debut in 1980 at Lake Placid, New York

China maintained that momentum in a thrilling women's 3,000m relay final, where the host also topped the podium in 4:04.240, again ahead of the Netherlands and South Korea.

Zhang sprinted past Suzanne Schulting of the Netherlands in the last stretch of the race and held off a desperate lunge from the Dutch star to cross first by a margin of just 0.0084 sec.

The only relay China did not win was the Dutch-dominated men's 5,000m.

"Today we performed well, we feared nothing, just marched forward courageously. I believe for the next couple of World Cup events leading up to the Olympics we will continue to compete harder and better," said Fan, a five-time 500m world champion.

Team manager Yu Haiyan, however, urged her athletes not to take anything for granted.

"The results at the Cup event showed the effects of our tough training program in the summer. But we have to put them into perspective because none of the teams are close to their best after a long break from international competition," said Yu.

ALSO READ: Getting all the things right

As one of the world's powerhouses in the sport, the Chinese short-track team has amassed 10 Olympic gold medals out of the country's total of 13 across all sports since China's Winter Games debut in 1980 at Lake Placid, New York.

However, the stagnant talent development since the retirement of a group of leading veterans took a toll on China's performances in the buildup to the 2018 Winter Games in Pyeongchang, leaving men's 500m sprinter Wu as the sole gold hope in South Korea.

After delivering on his promise to win the 500m in Pyeongchang, Wu has been struggling to regain his top form, due to injuries and distractions off the ice. A false start, which resulted in his disqualification from Saturday's 500m final, suggested he still needs more drills to return to winning ways.

"It's quite frustrating to finish the race this way. Maybe I just need more races to get used to international competition," Wu said.

As the current world-record holder over 500m, 27-year-old Heilongjiang native Wu has pledged to "start from zero" at the remainder of the World Cup meets.

Touted as Wu's successor, 24-year-old Ren also suffered a disqualification after being penalized for a rule violation during the men's 1,000m quarterfinals.

The World Cup's next stop will kick off in Nagoya, Japan on Thursday before the action heads to Europe－first in Debrecen, Hungary (Nov 18-21) and then concluding in Dordrecht, the Netherlands (Nov 25-28).

Citing the exceptional ice quality at the 53-year-old Capital Indoor Stadium, where the Cup meet was held as a test event for Beijing 2022, ISU technical delegate Hugo Herrnhof said he felt assured that next year's Olympic competitions will be staged to the highest possible standards.

"It's quite different and very impressive. It's a wonderful stadium and I think excellent work has been done to refurbish it in a very nice and modern way," Italian Herrnhof said of the venue, which he first visited during the 1993 world championships as an athlete.

"All the parties involved have done a great job to deliver this World Cup to the highest level … I think very exciting Games can be delivered (next year), no doubt about that."

As part of an adapted sports testing program tailored to accommodate the pandemic situation, strict COVID-19 countermeasures will continue to be implemented and assessed at ongoing test events.

They include international time trials in bobsled and skeleton at the National Sliding Center in northwest Beijing's Yanqing district and the Wheelchair Curling World Championship at downtown Beijing's National Aquatics Center, the 2008 Beijing Summer Games' swimming pool which has been transformed into an ice venue.