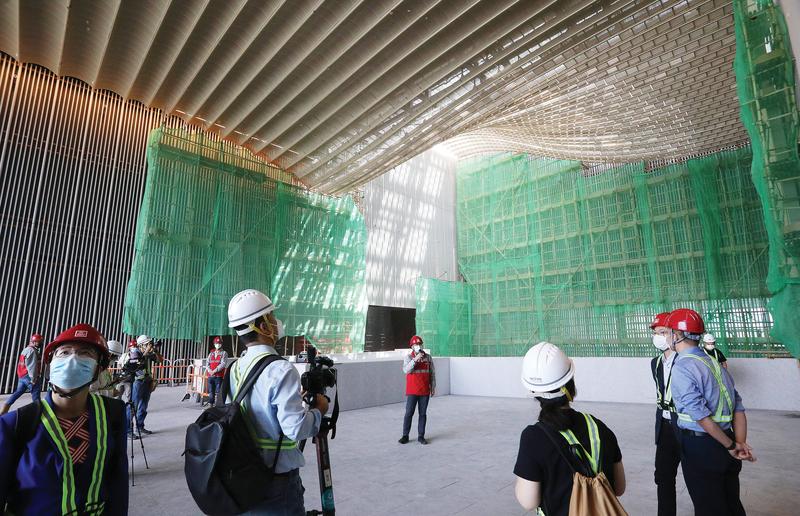 Members of local media examine the interior of the Hong Kong Palace Museum during a tour held by the Hong Kong government, the Liaison Office of the Central People’s Government in the HKSAR, and China State Construction Engineering Corp on Tuesday. The tour is one of a series of events featuring China’s engineering and architectural prowess. (CALVIN NG / CHINA DAILY)

The Hong Kong Palace Museum, a future cultural landmark of the city, will play a crucial role in art and cultural exchanges between China and the rest of the world, with a host of joint exhibitions that include exquisite art treasures, the museum director said on Tuesday.

“We will take over the building in December after the completion of the construction work in November, and the museum is set to open in July 2022,” Louis Ng Chi-wa said.

The information came during a media tour of the Hong Kong Palace Museum — the HK$3.5 billion ($450 million) project in the West Kowloon Cultural District — on Tuesday morning. The visit is one of the series of events featuring China’s engineering prowess and the beauty of Chinese architecture.

As part of the series events, a Chinese-mainland delegation comprising the nation’s top engineering experts and media representatives began a six-day trip in Hong Kong on Monday.

Ng said the Hong Kong Palace Museum is expected to house more than 900 artifacts from the Beijing Palace Museum’s national treasures — 166 of which are first-class cultural relics of China — after the museum opens to the public.

“Our plan is that we will arrange exhibition halls, introduce some multimedia programs, and ensure we have a stabilized environment for exhibitions by April next year, and objects from the Palace Museum will be shipped to Hong Kong (from Beijing) in May,” Ng said.

Looking ahead, Ng said that the Hong Kong Palace Museum will enhance cooperation not only with museums on the Chinese mainland, but also with those in the rest of the world.

The museum is the first cooperation project of the Palace Museum in Beijing outside the mainland.

To showcase Chinese aesthetic characteristics, the main building of the museum adopted a large number of high-precision cantilever upside-down structures to form a fair-faced concrete exterior wall with a slope of up to 1:3. The total area of the exterior wall is 11,000 square meters.

“Such a shape and scale is unique in the world, which also means this is extremely difficult to construct,” Wang Yong, assistant general manager of the Building Construction Department at the China State Construction Engineering (Hong Kong) or CSHK, told the media on Tuesday.

Behind such a challenging museum project, CSHK — the contractor of the project — has helped ensure the construction go smoothly, despite the city being hard-hit over the past two years by the 2019 social unrest and the COVID-19 pandemic.

“We incorporated technology into the building’s construction process,” Wang said.

Wang also said he believes that after the museum opens its doors to the public, it will play a positive role by connecting China and the rest of the world through art and culture.