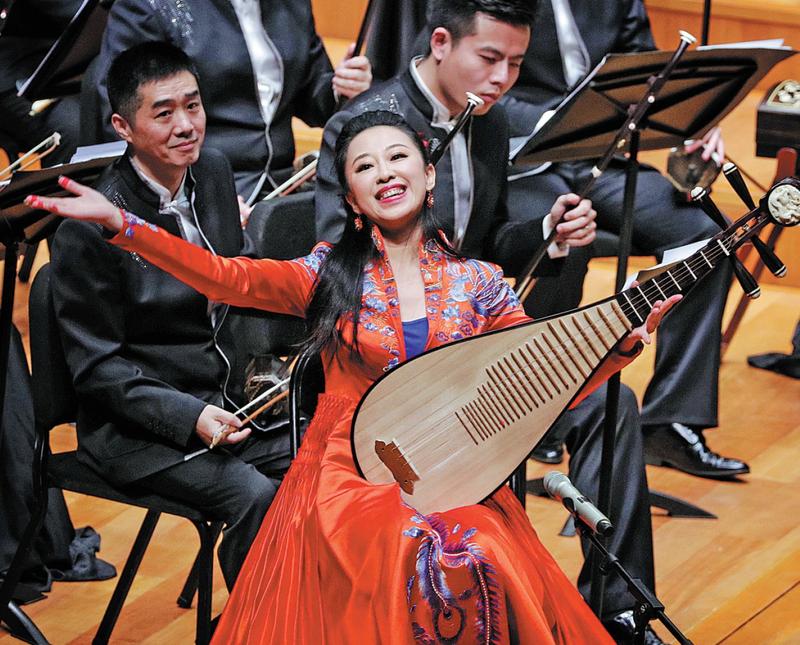 On June 23, Honor of Kings, one of the bestselling video games by Tencent Games' TiMi Studios, introduced its new character, a female warrior named Yun Ying.

Besides the cute image of the character, who is clad in a red uniform inspired by traditional Chinese female clothing, fans are also attracted to the game with the release of a new theme music performed by Zhao Cong.

Zhao, the principal pipa player of the China National Traditional Orchestra, wowed fans with her solid techniques of playing the traditional musical instrument－a four-stringed lute, one of the oldest Chinese musical instruments with over 2,000 years of history.

With different skills of playing her pipa, such as plucking the strings and sweeping the pick across the strings, Zhao vividly portrays the character of Yun Ying, a lovely, brave young female warrior armed with a spear.

"The sounds of pipa fit well with the character. When I listen to the music piece, it feels like I can see Yun Ying battling fearlessly with her weapon," comments a fan on the game site.

There are also fans of the video game who play pipa.

"After I listened to the amazing music, I instantly picked up my pipa and started to practice," writes another fan.

Zhao says: "Most of the video game's players are young people. I am proud that they can enjoy my performance through the game."

When she was invited to play music for the game, Zhao says she was not sure since she has a hectic schedule of performances and as the president of the China National Traditional Orchestra, she has lots of work to do aside from playing.

"But I agreed to play it because I like the music very much," says Zhao, adding that the composer, Liu Dong, knows the sounds of pipa well, and the piece has space for her to improvise.

"Like Chinese ink paintings, which have empty spaces, the composer left a part of the music piece without any arrangements. It offered me space to imagine and to create myself," says Zhao, who improvised with music elements from Ambush on All Sides, one of the best-known music pieces for pipa.

Composer Liu says: "Red Flame is composed for the role of a warrior and sounds cute and delightful. Pipa is very expressive and versatile. It is a great interpreter of the character."

For years, Zhao has been dedicated to introducing the traditional musical instrument to new audiences.

Born into a family of musicians in Northeast China's Jilin province, Zhao learned to play pipa with her mother, who is a pipa player, while her elder sister learned to play the violin with their father, a violinist.

She played for six hours a day and won a number of competitions.

"When I was a child, my mother told me that professional pipa players would practice eight hours a day. I bore that in mind, and practicing paid off," says Zhao.

She still keeps the habit of practicing daily even today.

"Almost every night, I practice from 9 to 12 pm. I am sorry to bother my neighbors," she says.

In 1996, Zhao came to Beijing to study pipa at the Central Conservatory of Music and joined the China National Traditional Orchestra after her graduation in 2000.

Her debut album, Carmen, in 2005, features pieces adapted for pipa and the guitar.

Her second album, Sound of China－Dance in the Moon, which was released by Universal Music Group's China division in 2008, was a breakthrough for Zhao.

"The album still sells worldwide, which makes me proud. I remember when I recorded the album, all I wanted was to showcase the versatility of pipa to those who may not know about the musical instrument," says Zhao.

Though she has never been trained to compose, Zhao has tried to write up original material since her first album.

Her fourth album, Pipa New Language, in 2014 had six pieces composed by herself and four adapted from classic works, including The Beatles' hit, Hey Jude.

The same year, she was commissioned to write a piece for a concert, highlighting the ancient Silk Road, by the China National Traditional Orchestra.

Her work, Flying Apsaras, was inspired by the trip and proved to be a success, receiving warm feedback from both audiences and critics.

"My composition is about displaying the musical instrument as well as portraying the scenes I saw," Zhao says.

In June, Zhao worked with British soprano Mary-Jess Leaverland to bring a new song, Leaving, in an attempt to add Western vocals into Chinese traditional music.

As a leading pipa player in China, she has performed at many national events, including the concert held at the G20 Hangzhou Summit in 2016.In 2019, she gave a performance at a concert in Moscow to celebrate the 70th anniversary of the establishment of Sino-Russian diplomatic relations.

On July 16, Zhao played during the opening ceremony of the 44th Session of UNESCO's World Heritage Committee in Fuzhou, Fujian province.

Earlier this year, Zhao was appointed president of the China National Traditional Orchestra. She says her vision is to use traditional musical instruments to show the world more about Chinese culture.

"I've seen how foreign friends are impressed by Chinese musical instruments, so I am confident that traditional Chinese music will attract a broad audience not only in China but also in the West."

In 2014, US pop star Katy Perry performed in Beijing. During her stay in the city, she visited the China National Traditional Orchestra.

Zhao recalls when more than 90 musicians from the orchestra played Perry's hit song, Roar, with Chinese instruments like the guzheng (plucked zither), erhu (two-stringed bowed instrument) and pipa, she sat backstage, wiping her tears of joy.

"Perry told us that she was so touched by the beautiful music and she described the afternoon as a highlight of her trip to China," recalls Zhao.

"It is a good example of mixing the musical forms of the East and the West. Though our traditional Chinese musical instruments are very old－some over 1,000 years, they can reach today's audiences, the younger generation in particular. They are capable of blurring borders and genres."