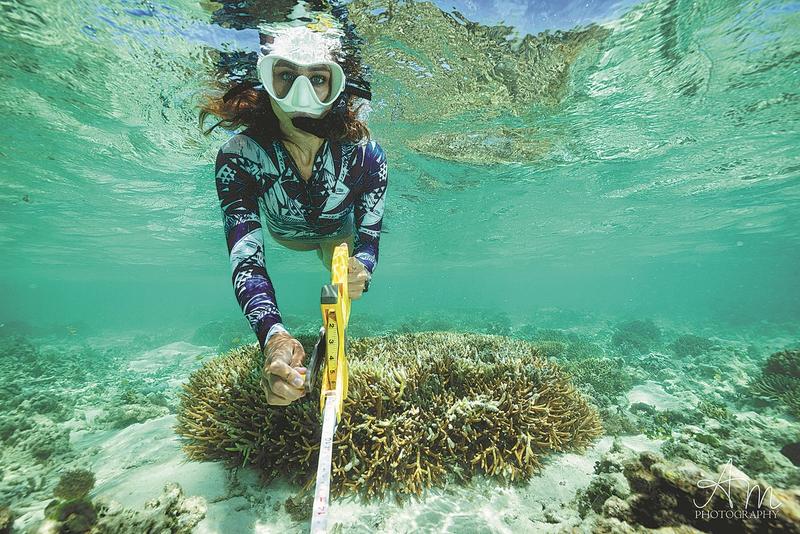 Kay Davis conducts a survey on the seabed off Heron Island in the Great Barrier Reef, Australia, on Dec 2. (ASHLY MCMAHON / FOR CHINA DAILY)

As coral reefs encapsulate an immense amount of biodiversity, it can be difficult to predict how each species within them will react to change.

The biggest coral reefs are found in the clear, shallow waters of the tropics and subtropics. The largest of these, Australia's Great Barrier Reef, is more than 2,400 kilometers long and is causing significant concerns for the United Nations Educational, Scientific and Cultural Organization's Heritage Committee.

The Australian government is now in damage-control mode. On July 15, a delegation of ambassadors to UNESCO was flown, at the expense of Australian taxpayers, to see the reef firsthand.

Ten environmental groups in Australia wrote to the UN's World Heritage Committee, urging it to put the reef on the "in danger" list.

A letter from group members that appeared in The Guardian on July 13 stated, "While parts of the Great Barrier Reef remain beautiful, we cannot underestimate the existential threat from climate change, with substantial coral loss in recent years from mass coral bleaching events in 2016, 2017 and 2020."

This was highlighted recently in a report by Southern Cross University in Australia. Scientists from the university found that if the trend of declining coral growth continues at the current rate, the world's coral reefs may cease calcifying by 2054.

Their report, published on June 10 in the journal Communication and Earth Environment, drew on research from the late 1960s, including 116 studies from 53 published papers.

Project leader Kay Davis from Southern Cross University said it has been known for some time that the world's reefs are "degrading".

The UNESCO report Impacts of Climate Change on World Heritage Coral Reefs, updated in 2018, warned that without major reductions in greenhouse gas emissions, all 29 World Heritage reefs would "cease to exist as functioning coral reef ecosystems by the end of this century".

The study led by Davis－which complements several others that show net coral reef dissolution between 2030 and 2080-relied on historical data to measure the current rate of decline and what may happen in the future.

Coral reef calcification, or coral growth, is significantly declining over time with "net-zero growth predicted for around mid-century", Davis said.

"As calcification is a key process in coral reef survival, this is a worrying find," she added. 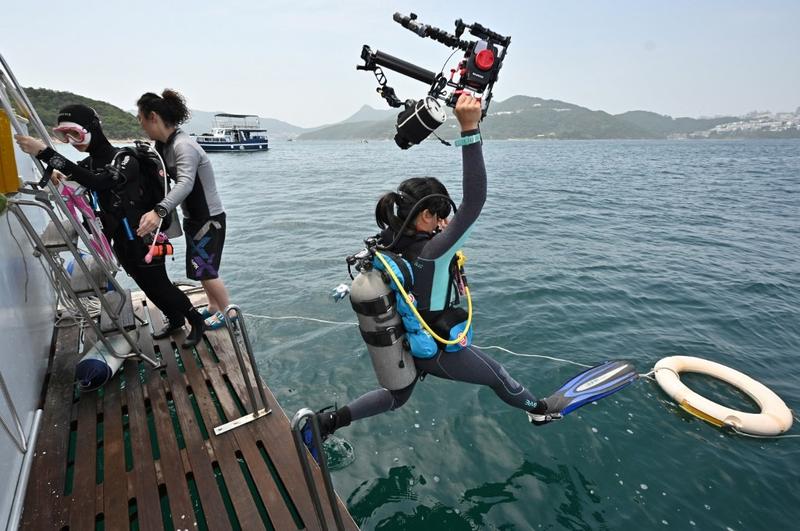 This April 18, 2021, photo shows a diver holding an underwater camera and jumping into the sea off the coast of Sai Kung in Hong Kong as part of a research for the environmental non-government organisation (NGO) Bloom Association. (PETER PARKS / AFP)

Davis said that in the past five years, the Great Barrier Reef has experienced three mass bleaching events, impacting more than 90 percent of Australian reefs.

"As coral reefs encapsulate an immense amount of biodiversity, it can be difficult to predict how each species within them will react to change," she said.

"If we consider the 'reef' as a whole, it is already being affected by anthropogenic (man-made) change, and will continue to worsen until serious mitigation efforts come into play like global reduction in greenhouse gas emissions and local changes to improve water quality and stabilize fisheries."

"Coral dissolution is the opposite, where the skeletons release CaCO3 back into the water, typically in periods of no productivity or when stressed," she said.

"The higher the rate of net growth (the difference between calcification and dissolution), the more reef-building corals and calcifying algae are produced for the ecosystem," she said.

"Coral ecosystems with low or negative calcification tend to relate to reefs with low coral cover, high algal cover, a loss of habitat and biodiversity of reef fish and other marine life, and a lower ability for the reef to become healthy again," she said.

"In the reefs that have been studied multiple times, approximately half of them were largely impacted by coral bleaching events or cyclone activity. In these cases, coral bleaching was caused by temperature stress.

"Stressful events like bleaching can reduce calcification for two reasons－bleaching can cause coral mortality and reduce ecosystem calcification because there is less coral to calcify, but corals can also reduce calcification in times of stress as a response to energetic limitations to increase their chance of survival. Other reefs included in this study have been impacted by smaller-scale stressors like dredging, nutrient pollution, or other human pollution."

"If ecosystem health declines further, dissolution will overtake growth, and coral skeletons will begin dissolving into the water column, resulting in coral death.

"Some reefs already exhibit net-dissolution, such as in a case study in Florida on an impacted reef.

"We show in this study that ecosystem photosynthesis of marine algae is increasing concurrently with declining calcification, indicating a shift in ecosystem functionality toward algal domination, which can result in lower reef health, resilience and biodiversity."

Mike van Keulen, senior lecturer in plant sciences and marine biology at Murdoch University in Western Australia, said there is no question that the world's tropical reefs are in danger.

"Climate change is the global, overarching issue," he said. "As temperatures rise, the corals are more vulnerable to bleaching. Healthy reefs should be able to largely recover from bleaching events, so long as they're not too frequent."

"It becomes more complicated when other local issues are also in play, such as overfishing, pollution and sedimentation," van Keulen said.

"These smaller-scale, more-local factors undermine the resilience of coral reef ecosystems, which means they don't have the resources to bounce back after things like bleaching events.

"This is why actions like Marine Protected Areas are so important－they help protect the ecosystem from these local impacts, giving them more resilience to larger-scale impacts like climate change."

A study by the United States National Academy of Sciences released in May said that should global warming continue at its current rate, the fate of coral reefs worldwide remains grim.

Van Keulen said: "Of course, climate change is accelerating, as we've seen on the Great Barrier Reef. With several years of bleaching in quick succession, there's little chance for the ecosystem to recover.

"I think we are now at the stage where permanent or very long-lasting damage has been done to many of our reefs. We have already lost a lot of the diversity and complexity of coral reef ecosystems around the world.

"We are likely to still have coral reefs into the future, but they won't look the same as they have traditionally－we'll get changes in the types of corals that dominate, from the delicate forms to more-robust forms that are better able to withstand bleaching.

"The sooner we stop the temperature increases associated with climate change, the more chance we'll have of retaining some semblance of our existing reefs." 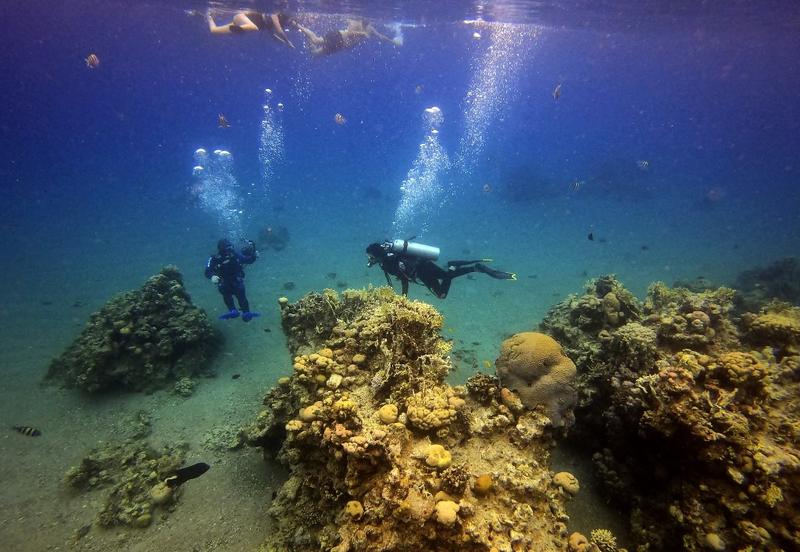 In this Feb 9, 2021 photo, scuba divers approach a coral reef while on a dive in the Red Sea waters off the coast of Israel's southern port city of Eilat. (MENAHEM KAHANA / AFP)