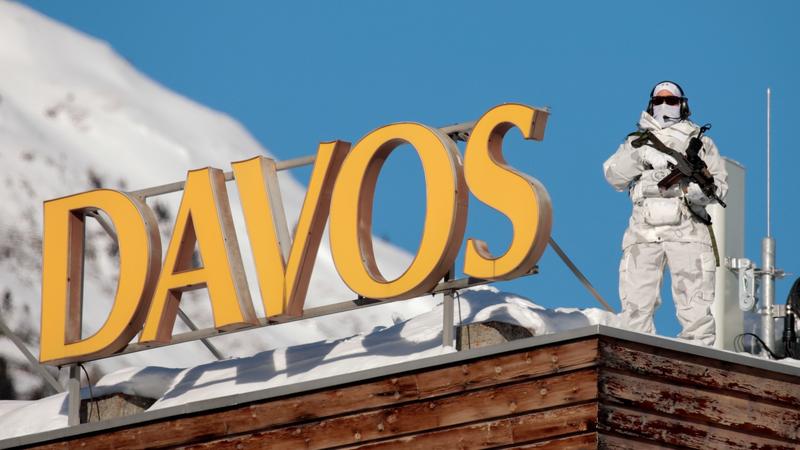 In this file photo, an armed member of the Swiss police watches from the snow-covered roof of the Hotel Davos ahead of the World Economic Forum (WEF) in Davos, Switzerland, on Jan 20, 2020. (JASON ALDEN/BLOOMBERG)

BOSTON - The World Economic Forum  (WEF) said its annual meeting will be held in Switzerland next summer but not in the ski resort of Davos.

Yann Zopf, a spokesman for the Forum, on Tuesday confirmed reports by Swiss broadcaster SRF and newspaper Suedostschweiz that the gathering of global business and financial leaders would be shifted away from its usual location. The new site will be announced in the coming weeks, he said.

Because of the pandemic, the WEF already decided to postpone the event, which attracts thousands including the likes of US President Donald Trump. It’s now scheduled for early summer rather than January.

Because of the pandemic, the WEF already decided to postpone the event, which attracts thousands including the likes of US President Donald Trump. It’s now scheduled for early summer rather than January

For the town of Davos, the cancellation comes as a blow because it leaves restaurants, bars and hotels devoid of the usual deluge of guests.

A University of St Gallen study estimated that the 2017 meeting generated roughly 60 million francs (US$66 million) in revenue for the Davos economy, and about 2 million francs in local tax revenue.

Still, it’s not the first time the WEF is being held elsewhere. In 2002 it was moved to New York to show solidarity following the Sept 11 terror attacks.

Meanwhile, the WEF and top accounting firms were scheduled to release on Tuesday key metrics for companies to use when reporting on their environmental, social and governance impacts.

Report sponsors said the effort aims to cut through a mishmash of existing standards on topics like carbon emissions and workforce diversity.

“The goal here is to elevate from thousands of metrics a number of subjects that are a baseline,” said Maha Eltobgy, head of investment for the WEF.

While companies have formal guidelines to follow for traditional financial reporting areas like revenue or cash flow, there is little formal agreement on how to measure the impact of so-called ESG issues.

Such topics have also drawn new attention from financial companies looking to price in their impact on asset values.

Efforts including the Sustainability Accounting Standards Board and the Global Reporting Initiative have offered various suggestions and pledged to work together.

Eltobgy pointed to the example of climate change. Tuesday’s report suggests companies disclose both how many metric tonnes of carbon dioxide they emit, and whether they have set targets on greenhouse gas emissions, drawing on separate recommendations from the different standard-setters.

“The work was scanning all the standards and metrics out there and picking the ones that would be seen as most universal,” she said.

The new metrics were developed with input from Bank of America and accounting firms Deloitte, EY, KPMG and PwC.