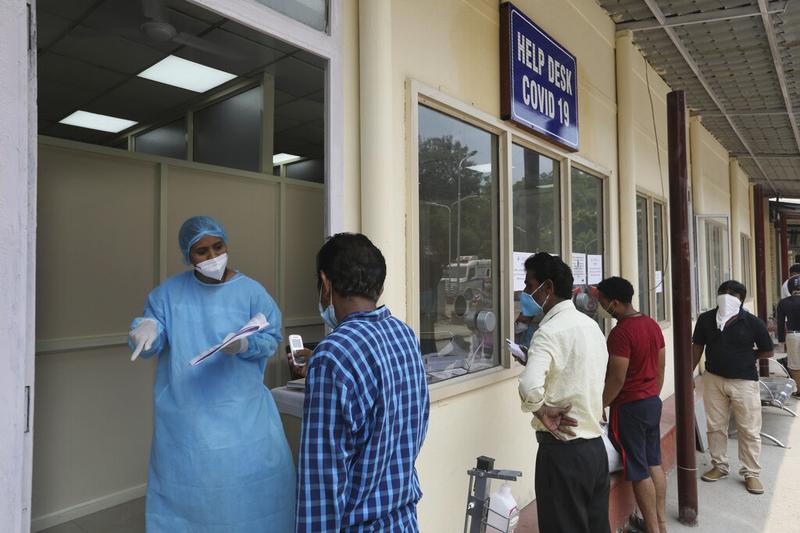 People wait in a queue to interact with their relatives through a video phone facility set up by a COVID- 19 help desk outside a hospital, in New Delhi, India, July 3, 2020. (MANISH SWARUP/AP)

The western state of Maharashtra, home to the densely packed financial capital Mumbai, has the country's highest total, recording 6,364 fresh cases of the virus on Saturday and 198 deaths from COVID-19, the disease caused by the virus.

India has the third-most confirmed cases in the world, exceeding 640,000 on Saturday, according to health ministry data. It follows the United States, Brazil and Russia.

Officials in Mumbai warned residents to stay away from the coast, as heavy rains were predicted for the next 48 hours. The monsoons typically cause waterlogging in many parts of the city and could scuttle coronavirus containment efforts by causing a further rise in infection numbers, experts say.

In the southern state of Tamil Nadu, the second worst-hit state in India, the number of cases crossed 100,000.

Mohammad Yousuf Ghazanfar, special adviser of Afghanistan's president on economic development, trade and poverty reduction died of COVID-19 on Friday, the Presidential Palace said in a statement on Saturday.

Yousuf Ghazanfar, who had been infected with novel coronavirus recently, was shifted to Turkey days ago and died at a hospital there.

As many as 819 people have died of COVID-19 out of more than 32,000 positive cases registered so far in Afghanistan since the outbreak of the pandemic in February in the country. 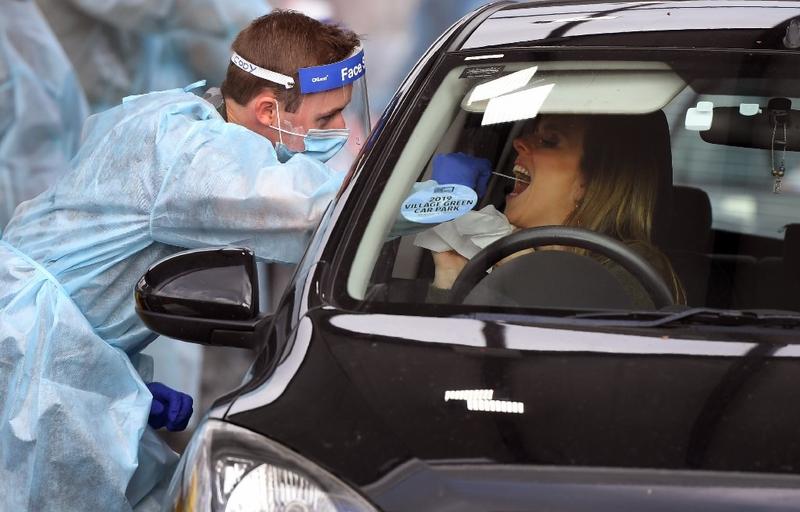 A member of the Australian Defence Force takes a swab sample at a drive-through COVID-19 coronavirus testing station in the Melbourne suburb of Fawkner on July 2, 2020. (WILLIAM WEST / AFP)

Australia and New Zealand may reopen their border to travel from the two countries as soon as September, Simon Birmingham, Australia’s tourism and trade minister, said in a July 3 interview with the Sydney Morning Herald newspaper.

The minister said such a time frame was realistic, though it would require the agreement of New Zealand’s government and is subject to uncertainties such as renewed outbreaks.

The southeastern state recorded 108 new cases on Saturday, up from 66 on Friday and more than 70 new cases in each of the previous four days, forcing authorities to reimpose lockdowns in more than 30 suburbs earlier in the week.

The spike in Victoria is being closely watched as the rest of the country has reined in the virus that causes COVID-19.

Overall, Australia has weathered the coronavirus pandemic much better than most other nations, with just over 8,300 cases and 104 deaths so far.

The number of active cases has reached a new high of 10,060, breaking the previous record of 9,808 active cases registered on April 15, it said.

The number of patients in serious condition increased from 65 to 77, out of 279 patients currently hospitalized.

Tokyo confirmed about 130 new cases of infections of the coronavirus on Saturday, a third consecutive day with more than 100 new cases, public broadcaster NHK reported.

Cases in Tokyo have risen to a two-month high, driven by the spread of the virus in the capital's night spots.

Tokyo on Friday reported 124 new cases, up from 107 the day before, partly due to increased testing among night life workers in the Shinjuku and Ikebukuro districts.

Japan's infection rates remain far below many other countries but the rising number of cases and the possibility of renewed restrictions have put authorities and businesses on edge.

New Zealand reported no new case of COVID-19 overnight on Saturday, said the Ministry of Health in a statement.

The number of active cases in New Zealand remains at 18, all of which are in managed isolation or quarantine facilities. There are no cases of COVID-19 in the community, said the ministry statement.

The total number of confirmed cases in New Zealand remained at 1,180, which is the number New Zealand report to the World Health Organization.

One person remained in Auckland City Hospital in a stable condition.

New Zealand laboratories completed 2,900 tests over the past 24 hours, bringing the total number of tests completed to date to 411,932. The seven-day rolling average of tests was 3,500.

Pakistani Foreign Minister Shah Mehmood Qureshi said on Friday he had tested positive for COVID-19, days after holding high-profile meetings including one with US special representative on Afghanistan Zalmay Khalilzad in Islamabad.

"This afternoon I felt a slight fever and immediately quarantined myself at home," Qureshi said on Twitter. He said he felt healthy and would carry on his duties from home.

In the last few days, Qureshi has had contact with Pakistani Prime Minister Imran Khan in parliament and in a cabinet meeting on Wednesday.

Qureshi also met Khalilzad on Wednesday when the US special representative travelled to Pakistan to discuss progress on the Afghan peace process.

Pictures released from those meetings showed Qureshi and others wearing face masks.

Pakistan has reported 221,896 cases of the coronavirus and 4,451 deaths. The country has continued to see around 4,000 new cases on a daily basis, despite daily testing numbers falling.

A number of high officials have tested positive for COVID-19 in Pakistan, including Minister for Railways Sheikh Rasheed and the speaker of the lower house of parliament, Asad Qaiser. 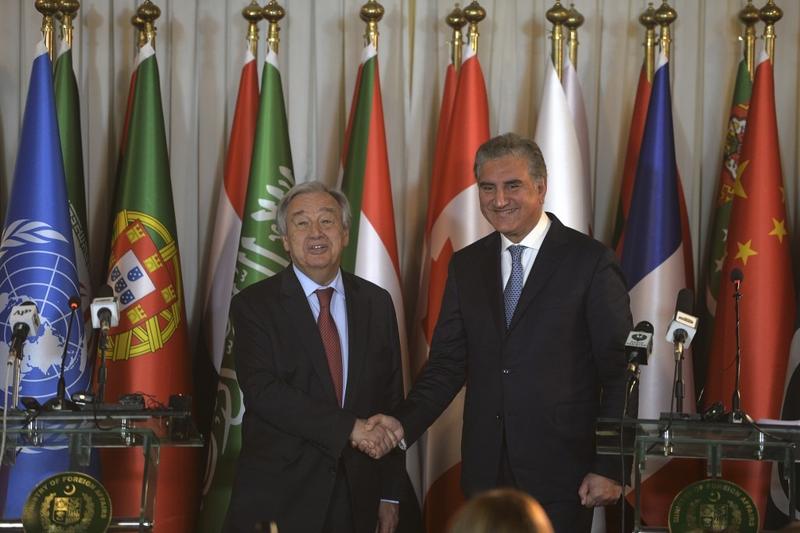 Qatar's Health Ministry on Friday announced 756 new infections of COVID-19, increasing the total number of confirmed cases in the Gulf state to 98,653.

"Some 1,986 people recovered, bringing the total number of recoveries to 88,583, while three others died, raising the fatalities to 121," the official Qatar News Agency reported, quoting a statement by the ministry.

It revealed that infections have been soaring due to people's gatherings and visits, and ignoring of preventive measures recommended by the government, the most important of which are staying at home and maintaining social distancing.

A total of 4,193 new cases were reported, bringing the accumulated infections to 201,801, the Health Ministry tweeted.

The recoveries reached 140,614 with the registration of 2,945 new recovered cases.

Meanwhile, the ministry announced on Friday that more than 100 virus-infected patients were treated through the blood plasma of recovered cases. The treatment is part of a nationwide medical study. 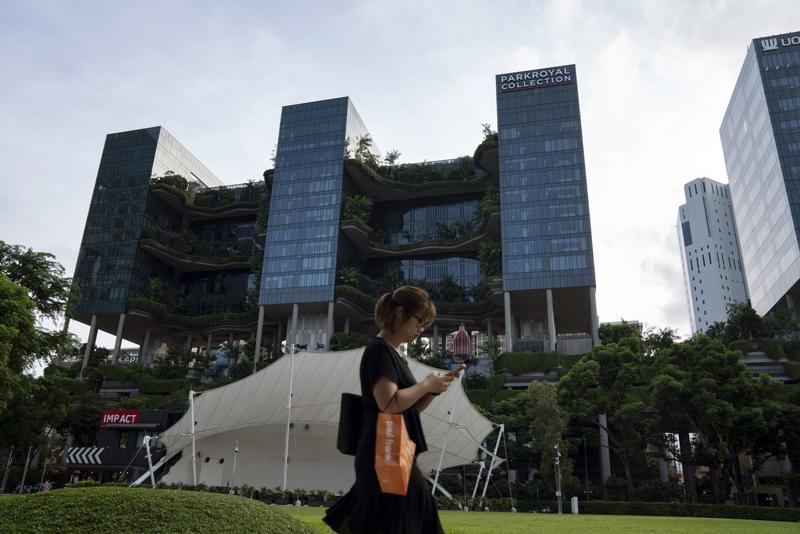 Movie theaters and hotels in Singapore are getting a reprieve as the city-state gradually reopens its economy after a lockdown.

Cinemas will be able to open their doors to movie-goers starting on July 13, limiting the maximum capacity to 50 people in each theater hall, according to a government statement. As many as five people from the same group will be allowed to sit together, and seats will be reconfigured to provide the 1 meter distance for other guests. Mandatory temperature checks will be carried out before entry.

Hotels, which saw occupancy rates nose-dive as the city-state shut its borders to visitors to contain the spread of the virus, will also be able to accept leisure guests after receiving the permit from the government, the Singapore Tourism Board announced. This will allow so-called staycations by Singapore residents, giving the industry a much-needed boost as global travel restrictions are still in place.

The hotels will be limited to no more than one person for 10 square-meter in public spaces, and guests will reduce mingling in lobbies and facilities through staggering times. Dine-in services, gyms and pools can also resume operations after receiving approvals.

Singapore started lifting restrictions on businesses at the start of June, with a “phase two” re-opening as of June 19 that has allowed consumers to trickle back to restaurants and shopping malls. Casinos and several tourist attractions were also allowed to restart operations from July 1, with most attractions restricted to no more than 25 percent capacity.

South Korea
South Korea on Saturday confirmed 63 new coronavirus cases in 24 hours, raising the total tally to 13,030, according to data from the Korea Centers for Disease Control & Prevention. One more patient died from the disease, bringing the total death toll to 283. The nation reported the same number of new cases on Friday in biggest gain in two weeks. 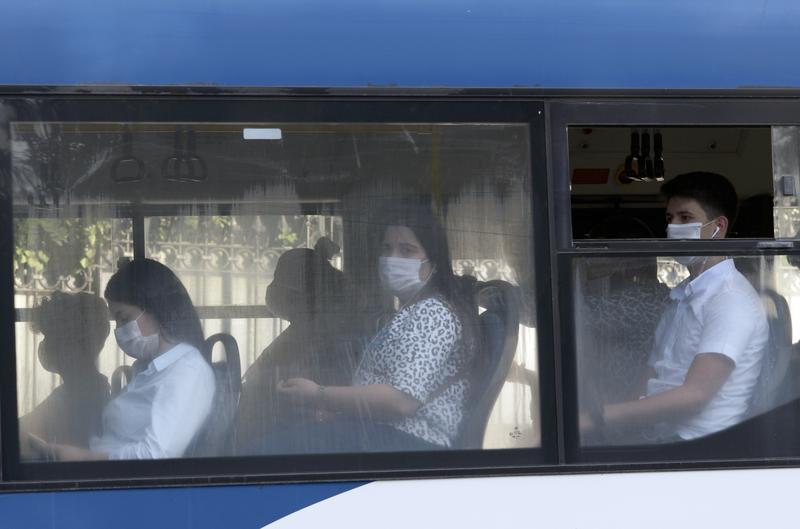 People wearing face masks to protect against the spread of coronavirus, sit in a public bus, in Ankara, Turkey, July 1, 2020. (Burhan Ozbilici / AP)

Meanwhile, 19 people died in the past 24 hours, taking the death toll to 5,186, the minister tweeted.

A total of 1,313 patients recovered in the last 24 hours, raising the total recoveries to 178,278 in Turkey since the outbreak, Koca said, noting that 1,082 patients are being treated in intensive care units and 374 are intubated.

"The spread of the virus is fast; it takes time for cases to decrease," the minister stated.

The United Arab Emirates (UAE) on Friday announced 672 new COVID-19 cases, bringing the total confirmed cases in the country to 50,141.

UAE's Ministry of Health and Prevention said in a statement the new cases include many nationalities. All are in a stable condition and receiving medical treatment.

Some 489 more patients have recovered from the virus, taking the tally of recoveries in the UAE to 39,153, according to the ministry.

The ministry also confirmed one more death, pushing the country's death toll from the pandemic to 318.

The UAE was the first among the Gulf countries to report COVID-19 cases.