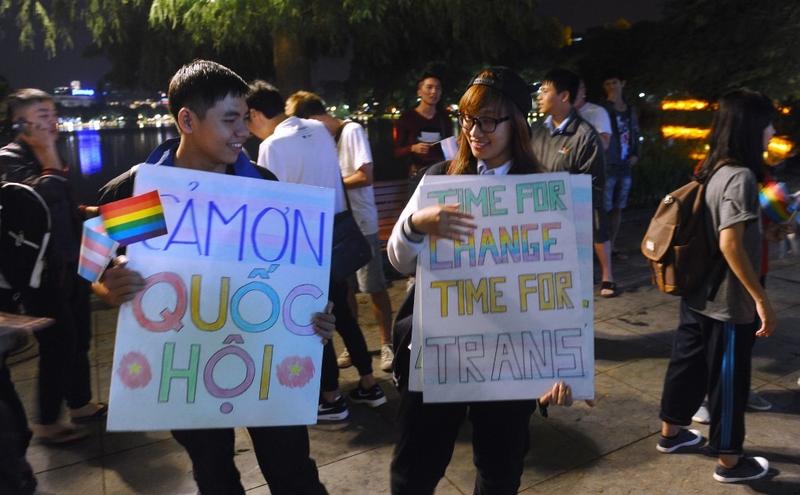 In this Nov 24, 2015 file photo, members from the local lesbian, gay, bisexual and transgender (LGBT) community gather to celebrate a law newly approved by the National Assembly on transgenders in Hanoi. (HOANG DINH NAM / AFP)

The baby’s birth has been celebrated by the transgender community and highlighted Vietnam’s position as one of the most progressive countries on LGBT+ rights in Asia, where many gay or transgender people are still persecuted and even jailed

Khang’s pregnancy and the birth of his baby girl in May with his partner, a transgender woman, has made headlines in Vietnam, where it is rare for gay or transgender couples to have children despite broad LGBT+ acceptance.

“My wife and I both want to have children. You don’t need to be a woman to give birth,” said Khang, 24, a model who was born a woman but identifies as a man.

“Everybody seems to think trans people don’t think about having a family or the future. I want to show that the LGBT+ community are like anybody else,” he told the Thomson Reuters Foundation by phone.

The baby’s birth has been celebrated by the transgender community and highlighted Vietnam’s position as one of the most progressive countries on LGBT+ rights in Asia, where many gay or transgender people are still persecuted and even jailed.

But it has also underscored what activists say are a lack of legal protections and persistent discrimination due to a delay in a law to fully recognise transgender people.

Vietnam has quietly become a trailblazer on LGBT+ rights in Asia in recent years, with laws to decriminalise gay marriage and allow same-sex couples to live together, although it stopped short of a full legal recognition of such unions.

A law passed in 2015 to allow transgender people to legally change their gender in official documents has yet to come into force, becoming a barrier for transgender people like Khang and his 21-year-old partner, Dang Ngoc Minh Anh.

The couple has yet to obtain a marriage licence or a birth certificate for their daughter, which they plan to do this month.

Their families approve of their relationship, but had doubts of their plan to have a child because doctors warned Khang of the risks of pregnancy after three years of hormone therapy.”Our parents were scared that our kid wouldn’t be normal like others and will be discriminated against,” Khang said, adding that their parents only knew about their grandchild when they were shown the test results proving the baby is healthy.

The Health Ministry’s legal affairs department did not respond to requests seeking comments about the legal delay.

Lawyer Dinh Hong Hanh, a board member at the ICS Center, a Vietnam-based LGBT+ rights group, said that with no local precedent, any legal complications were unclear.

But she said the delay in legal recognition had made the broader transgender community vulnerable - a situation exacerbated by the coronavirus pandemic because a lack of ID has meant they are excluded from government support.

“For trans people who work as street performers and manual workers, the fact that most of them don’t have identification papers excludes them from the government’s support package and other social welfare and medical services,” the lawyer said.

“When trans people go for a checkup at the hospital, they would be denied because their gender on paper doesn’t match their appearance,” said the founder of the Female-to-Male (FTM) Vietnam Organisation, a research and advocacy group.

“The biggest problem is healthcare. Trans people still buy and inject hormones on their own and go to ‘underground’ places for (reassignment) surgery,” said An, 26, who since 2015 has run a Facebook transgender support group with over 5,500 members.

In other parts of Southeast Asia, progress on LGBT+ rights remains slow.

Thailand has a prominent LGBT+ community, but the country does not formally recognise same-sex unions or partnerships, and transgender people cannot legally change their gender on identity cards.

Gay sex is illegal under a British-colonial era law in Singapore and in mainly Muslim Malaysia, where cross-dressing is also outlawed in some states and punishable by jail.In Indonesia has a growing number of local laws targeting LGBT+ people, while Brunei backed down from imposing a death penalty on gay sex under Islamic law last year after protests.

Meanwhile a British court in April rejected a transgender man’s bid to be named the father rather than the mother on his child’s birth certificate, in a case that suggests complications between trans rights and parenthood.

Not knowing when Vietnam will legally recognise transgender people, Khang said he was prioritising his newborn daughter.

He said he would put his name under ‘mother’ on the baby’s birth certificate, though he plans to resume hormone therapy next month.

“It doesn’t matter what I am in the birth certificate, what matters is what my daughter calls me,” said the young father, as his baby awoke from her afternoon nap and cried for his attention.