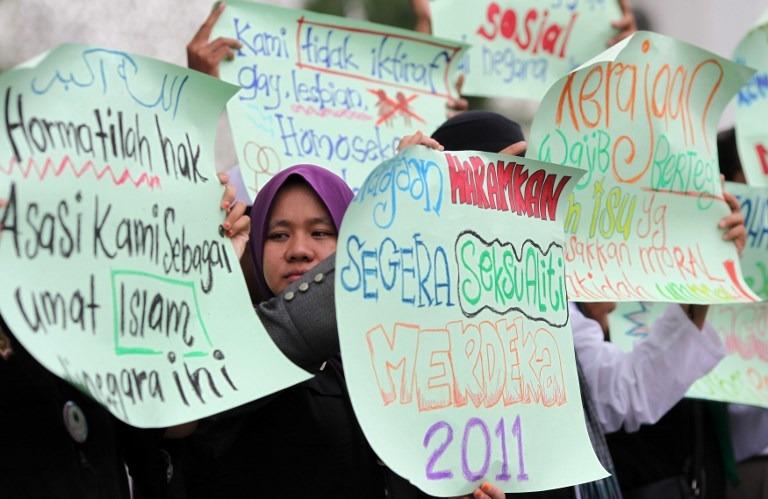 Protesters raise placards during a protest outside a corridor Mosque in Shah Alam near Kuala Lumpur on Nov 4, 2011. The demonstration was to urge the government to give recognition to LGBT community. (MOHD RASFAN / AFP)

KUALA LUMPUR — With songs like “I woke up gay” and “Lonely lesbian”, LGBT+ punk band Shh...Diam! is making a rare splash in Malaysia, using music to fight long-running discrimination.

The four-member group is a rarity in a country where gay and transgender issues are often seen as taboo, cross-dressing is illegal and sodomy is banned under a British colonial-era law.

Its name, which means “shut up” in the Malay language, is meant to mock critics for seeking to silence the country’s lesbian, gay, bisexual and transgender (LGBT+) people.

“We never intentionally set ourselves up as an LGBT band,” lead singer Faris Saad told the Thomson Reuters Foundation before a performance on the outskirts of the capital Kuala Lumpur.

But eventually your life experiences make their way to your music so you can’t help it. You’ve got to be honest - so that’s what we are with our music

“But eventually your life experiences make their way to your music so you can’t help it. You’ve got to be honest - so that’s what we are with our music,” said the 34-year-old transgender man, who began transitioning in 2014.

Several incidents in the Muslim-majority nation this year have stoked concerns among campaigners that the climate for the country’s LGBT+ community is deteriorating further.

In August, government officials ordered the removal of portraits of two LGBT+ activists from an art exhibition and a transgender woman was attacked, sparking public outrage.

And in September, two women in the conservative state of Terengganu were caned under the Islamic sharia law after being caught attempting to have sex in a car.

Shh...Diam! had its unlikely beginning nine years ago.

The organiser of a lesbian pool party was looking for a band to entertain revellers, so aspiring musician Faris quickly assembled the group with some acquaintances.

Since then, it has built up a small but steady fan base among the LGBT+ community, producing two albums and performing in several European countries.

Raised in a Muslim family, Faris knew from a young age that the female body he was born with was wrong.

He decided to transition soon after turning 30. But to get the hormone treatment he needed, he had first to undergo a six-month psychiatric evaluation to be diagnosed with “gender identity disorder”.

“I feel more confident that I am now in my own body,” said Faris, adding that the band wanted to encourage other LGBT+ people to embrace themselves like him too, while changing the skewed perceptions toward the community.

“We have been vilified by the government. According to the government, LGBT people are perverts and paedophiles,” added the freelance journalist. “I want to change that.” 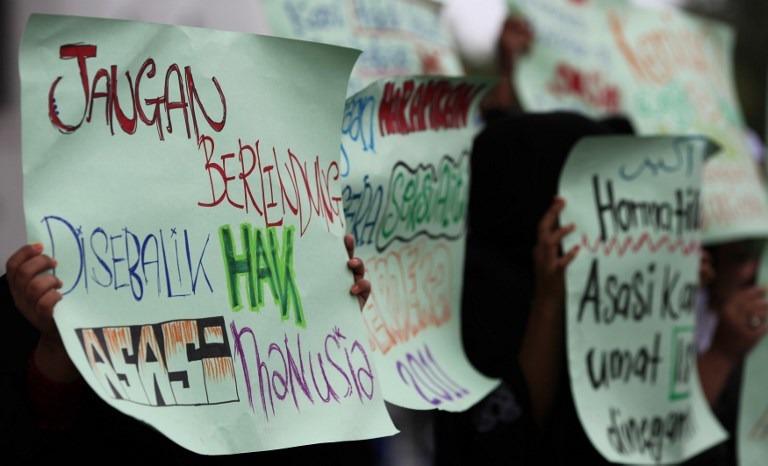 Protesters raise placards during a protest outside a corridor Mosque in Shah Alam near Kuala Lumpur on Nov 4, 2011. (MOHD RASFAN / AFP)

The recent surge in attacks on the LGBT+ community and anti-gay rhetoric from senior officials has dovetailed with what critics say is a rise in religious conservatism, which has eroded Malaysia’s traditionally tolerant brand of Islam.

More than 60 percent of Malaysia’s 32 million people are Malay Muslims, but the country is also home to a large number of ethnic minorities who practise other religions.

Religious leaders are among those who have spoken out against the LGBT+ community, arguing homosexuality is forbidden by religious teachings.

“God has created man and woman and created them in pairs. We cannot go against this, it is wrong,” Harussani Zakaria, an outspoken mufti, or Islamic scholar, told the Thomson Reuters Foundation.

“We are not against democracy, we just can’t defy God’s orders. Even animals do not engage in homosexual acts,” he added.

Since Shh…Diam! was set up, it has not had any run-ins with the authorities, and has stuck to performing in independent venues and in urban areas which its members see as generally accepting of their music.

The band’s music is a mix of metal, punk and jazz. Their songs also touch on topics such as housemates fighting, Bollywood movies – and even toilets.

I wish that one day in Malaysia in the near future, we can talk about these kinds of issues very openly

The guitarist, who asked to be referred to as Yon, said the band aimed to give LGBT+ people a way to escape daily discrimination and just have fun through music.

“It’s our experiences and random things that we like which we put into our songs,” said Yon, who is bisexual.

“The main purpose of the band is to have fun. We love to play music, we play music, the LGBT activism that comes with the band is just a reflection of who we are,” she added.

Indie music fan Gary Tay, who was among the small crowd that showed up to watch the band’s performance, said he believed artists such as Shh...Diam! should be allowed to sing about what they believed in.

“I wish that one day in Malaysia in the near future, we can talk about these kinds of issues very openly,” Tay said.