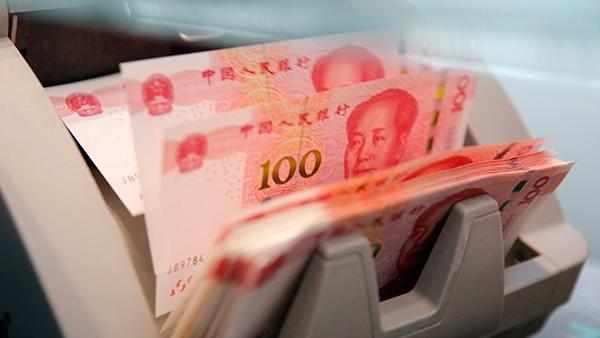 Chinese 100 yuan banknotes are seen in a counting machine while a clerk counts them at a bank in Beijing. (PHOTO PROVIDED TO CHINA DAILY)

Global central banks' holdings of renminbi-denominated assets in their foreign exchange reserves have increased to a record high, which contributed to a stable sovereign rating for China and showed investors' confidence in the country's economic resilience despite the COVID-19 shocks, according to experts.

A quarterly survey from the International Monetary Fund showed that, by the end of March, the share of assets denominated by RMB in global official foreign exchange reserves rose to 2.02 percent, the highest since the Chinese yuan was included in the statistics in the fourth quarter of 2016.

The world's total foreign reserves in RMB reached US$221.48 billion in the first quarter of this year, up 145.3 percent from three years ago, IMF data released on Wednesday show

The world's total foreign reserves in RMB reached US$221.48 billion in the first quarter of this year, up 145.3 percent from three years ago, IMF data released on Wednesday show.

The widespread adoption of the Chinese yuan as a reserve currency implied the confidence of central banks and investors in the stable outlook of the world's second-largest economy, supported by its robust external finances and a track record of strong economic performance, said analysts.

The rising international use of the renminbi and China's strong position as a large external creditor also contributed to its stable sovereign ratings, the world's biggest rating agencies indicated.

As of this week, all three global leading rating agencies－S&P Global, Moody's and Fitch Ratings－have updated China's sovereign rating at "A+"or "A1" with a stable long-term outlook, unchanged from before the COVID-19 outbreak.

"The increasing global use of the renminbi bolsters China's external financial resilience," said Kim Eng Tan, an analyst at S&P Global Ratings."If the renminbi achieves more than 3 percent of aggregated allocated international foreign exchange reserves, it could strengthen external and monetary support for the sovereign ratings."

"Demand for RMB-denominated assets has increased in recent years, and we expect the share of RMB-denominated official foreign exchange reserves to continue to rise," said Tan.

The IMF included the renminbi in its official foreign exchange reserves database starting from Oct 1, 2016

"Although the People's Bank of China, the central bank, does not operate a fully floating foreign exchange regime, it has allowed greater flexibility in the nominal exchange rate in recent years," Tan added.

Since then, IMF member countries can record their holdings of renminbi-denominated external assets as official reserves. The renminbi reserves were first published in the survey for the last quarter of 2016, accounting for 1.07 percent of the total.

China's economic recovery continued at a solid pace in April and May, indicated by the strong industrial output and investment growth. The government has launched a strong policy stimulus to mitigate the economic damage of COVID-19, through measures such as increasing the fiscal deficit and boosting the issuance of government bonds.

Fitch Ratings raised China's 2020 GDP forecast to 1.2 percent from 0.7 percent on Monday. Moody's forecast that China will be the only G20 country to post positive growth in 2020, at 1 percent, followed by a strong rebound of 7.1 percent in 2021.

While economy-wide leverage is likely to climb further over time and pockets of financial stress will periodically become apparent, the authorities have the financial and policy means to contain the rise in debt, mobilize resources to support public sector entities and maintain financial stability, according to Moody's.