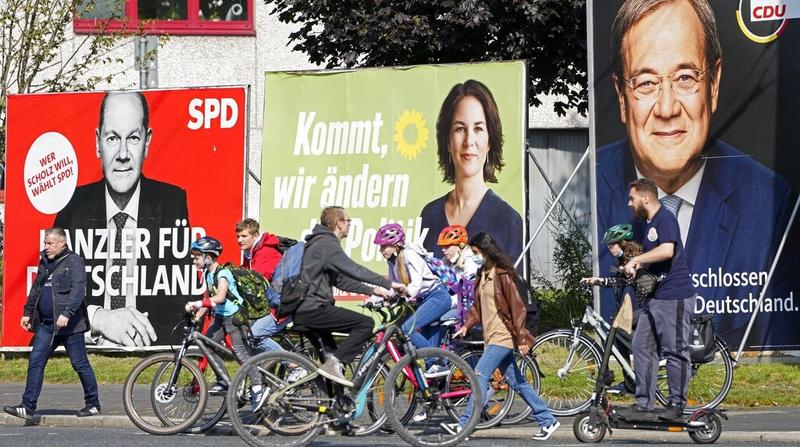 BERLIN - Germans are voting on Sunday and for the first time in 16 years the next government will not be led by Chancellor Angela Merkel, while her conservative union of the CDU/CSU might be demoted to an opposition party.

With Merkel's retirement from politics, the country seems ready to embark on a new path.

The most popular as well as most likely candidate for Merkel's succession is Olaf Scholz of the Social Democratic Party (SPD), currently vice chancellor and finance minister.

His party is leading polls at around 25 percent, and he was widely considered the winner of the TV debates with the other two main candidates: the CDU/CSU's Armin Laschet and Annalena Baerbock of the Green Party.

Instead of being presented with two major alternatives in the form of two political camps, German voters faced three chancellor candidates whose charisma looked rather weak.

But the tide has only begun to turn in the last month, as media said Scholz's great strength is the weaknesses shown by his competitors.

During a visit to the country's flooded areas, Laschet was caught laughing by cameras while German President Frank-Walter Steinmeier offered his condolences to the victims of the recent floods at Erfstadt, one of the worst-hit areas in the country.

Baerbock, who never before held a position at either state or federal level, also faced some credibility issues, mainly due to accusations of plagiarism in a book she published.

As her party is vehemently pushing for more transparency in politicians' income, she also came under fire for reporting additional income too late.

"This has been one of the strangest election campaigns Germany has ever seen," Michael Mertes, a polling expert at opinion research institute Infratest dimap, told Xinhua.

"Instead of being presented with two major alternatives in the form of two political camps, German voters faced three chancellor candidates whose charisma looked rather weak," Mertes said. 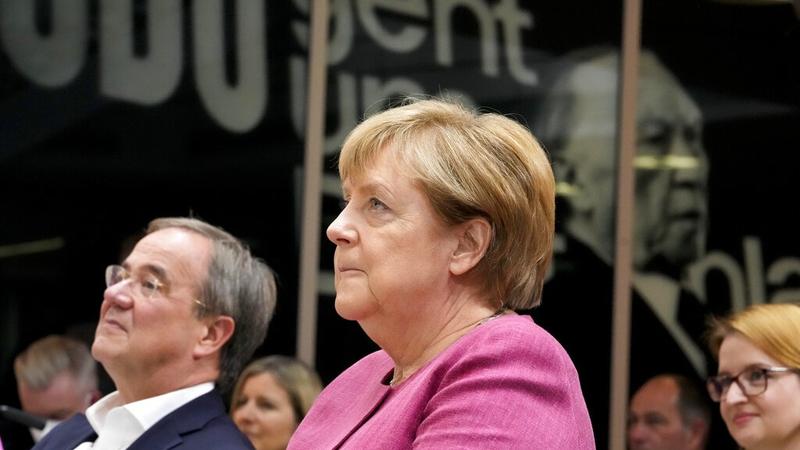 German Chancellor Angela Merkel, right, and the governor of German state North Rhine-Westphalia and Christian Union parties candidate for chancellor Armin Laschet attend an event of his Christian parties to present a program of the future digital policy for the country at the party's headquarters in Berlin, Germany, on Sept 6, 2021. (MARKUS SCHREIBER / POOL / AP)

Although a renewed coalition between the CDU/CSU and current junior partner SPD could still barely reach the required majority, with the CDU/CSU polled between 21 and 22 percent, a continuation has been repeatedly ruled out by politicians from both parties.

The Greens is looking to become Germany's third biggest party with 15 to 17 percent of projected votes and are likely to be part of the next government.

They are the partner of choice for the SPD, with whom they have the greatest political overlap. Together, the two parties clearly distinguish themselves from the CDU/CSU by emphasizing social issues such as secure pensions and raising the statutory minimum wage.

The Free Democratic Party (FDP), projected at 11 percent, is particularly committed to the topics of business and digitization.

After the party only refrained from government participation at the last meter in the federal elections in 2017, it could again play an important role this time, either in a coalition with the CDU/CSU or the SPD, in each case together with the Greens.

In some cases, Brussels is waiting until Germany forms a new government before making decisions such as approving a package of measures to counter climate change

"Various three-party coalitions are conceivable today," Mertes said, expecting "a long phase of government formation after the Bundestag elections because no party will achieve an overwhelming victory."

Although three in four German voters have already made up their mind on whom to vote for, there could be a new record number of absentee voters, probably as high as 50 percent.

As the most populous and economically strongest member state of the European Union, Germany plays an important role in Europe and important decisions in the region have thus been put on hold.

In some cases, Brussels is waiting until Germany forms a new government before making decisions such as approving a package of measures to counter climate change.

Germany is also an important partner for other major world countries.

In an interview with Xinhua, Germany's former chancellor Gerhard Schroeder stressed that the next government should keep a pragmatic China policy and respect the one-China policy, as a change in this would bring "not any good consequences for both China and Germany."