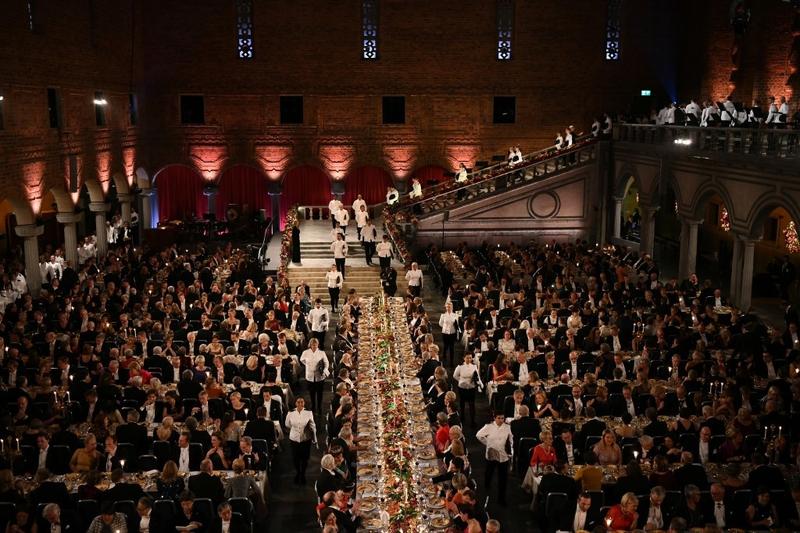 This picture taken on Dec 10, 2018 shows a general view of the Nobel Prize banquet and its guests in the Stockholm City Hall, Sweden. (JONATHAN NACKSTRAND / AFP)

STOCKHOLM - Due to the uncertainty of the COVID-19 pandemic, this year's Nobel Prize laureates will receive their awards in their home countries for the second year running, the Nobel Foundation said here on Thursday.

The traditional banquet will be canceled, but the award ceremony will be held at Stockholm's City Hall on Dec 10 in the presence of a local audience. The event will be broadcast on TV and on the Nobel Foundation's social media channels.

The traditional banquet will be canceled, but the award ceremony will be held at Stockholm's City Hall on Dec 10 in the presence of a local audience

"I think everybody would like the COVID-19 pandemic to be over, but we are not there yet," said Vidar Helgesen, executive director of the Nobel Foundation, in a press release.

"The Nobel Prize is a global phenomenon. Every year, laureates from different continents are selected. Uncertainty about the course of the pandemic and international travel possibilities is the reason why the 2021 laureates will receive their medals and diplomas in their home countries.”

"As our traditional events assume new shapes, we are looking forward to reaching even more people around the world by using new formats and digital solutions -- spreading the knowledge, inspiration and hope that the Nobel Prize stands for," Helgesen said.

Each year on Dec 10, a ceremony is held in the Swedish capital to mark the anniversary of the death of Swedish chemist and inventor Alfred Nobel. On that day, the annual Nobel Prizes are awarded.

Traditionally, the laureates attend the award ceremony and the banquet in person, and participate in a series of Nobel Week activities, such as lectures and concerts.

Due to COVID-19, the 2020 Nobel Prize winners received their awards in their respective countries, and the ceremony was broadcast online. Last year's banquet was also canceled.

This year's Nobel Prizes, awarded in for achievement in medicine, physics, chemistry, literature, peace and economics, will be announced between Oct 4 to 11.